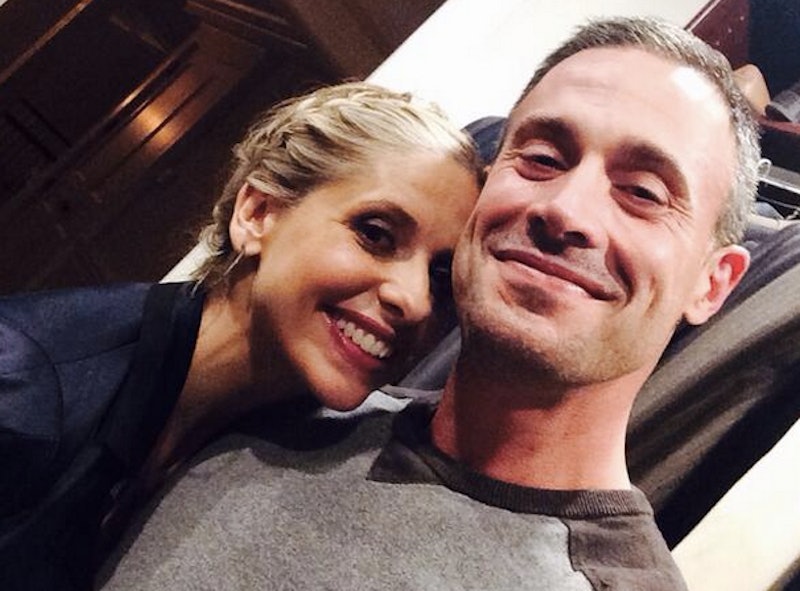 Buffy is back. Don't get too excited, I don't mean literally Buffy the Vampire Slayer has returned, but the actress behind her, Sarah Michelle Gellar, is currently enjoying a career resurrection and we couldn't be happier for her. Thanks to CBS' new comedy series The Crazy Ones, Gellar is back in the public eye and she recently celebrated a Twitter milestone by posting a selfie with her husband, Freddie Prinze Jr.

There was some buildup to the tweet, too. As Gellar's follower count inched closer to 200,000 she tweeted, "Come on guys get me to 200,000 maybe I have something special in return......" Since usually, Gellar's twitter is filled with Buffy references, we were excited for what this "something special" would be. A photo with another cast member? A rare behind-the-scenes picture? A video message?

Finally, Gellar reached 200,000 followers, and the something special turned out to have absolutely nothing to do with Buffy. Instead, she posted a selfie with Prinze, her husband of 11 years. It was adorable and we're glad to see the couple going strong, but after the tease of "something special," it was a bit of a letdown.

Maybe if Gellar had posted the photo back in 2002, when she and Prinze were the Ashton and Mila of their time, this photo would've been more exciting.

See? It's sweet right? But just a little blah. The photo was successful, however, in reminding us of those early 2000s glory days, when the pair was co-starring in Scooby-Doo and Prinze was all over teen magazines. It's great that Gellar and Prinze, who have two children, can be just as cute as they were in their heyday, but now that it's Thursday, I think it's time for a throwback.

Oh early aughts fashion, how we've missed you. Maybe next time Gellar has a Twitter-occasion to celebrate, she'll honor us with a classic #tbt.