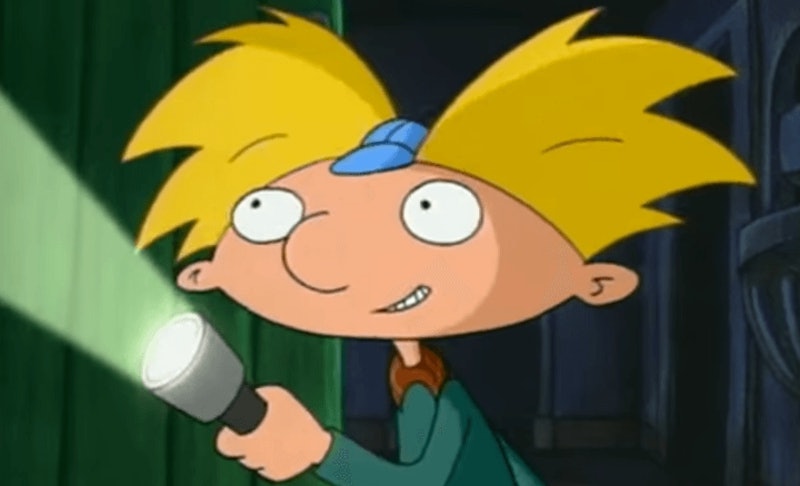 The cartoons of the '90s were an important part of our childhoods — even if you weren't born in the '90s. Let's be real: it was a baller decade for cartoons. That's why it probably goes without saying that there are a whole bunch of '90s cartoons that adults can also enjoy, whether that meant your parents could watch them with you or you still get enjoyment out of them today even without the help of your dear friend nostalgia. These cartoons, like fine wine, get better with age. The goofy humor never gets old, and the sometimes more adult humor they snuck in on us finally gets understood.

Instead of marathoning whatever the future Stranger Things is, it might be a good idea to just get nostalgic with some classics and really take in their awesomeness. It also helps that now many of us have babysitting jobs, or kids, or nieces and nephews, maybe even young brothers and sisters. What better way to enjoy the old classics if not with an impressionable youngster? The cartoons of the '10s are all well and good for these babies, but would it be a terrible world to live in if generation after generation benefited from the greatness of Rocko's Modern Life or The Wild Thornberrys? Yeah, I didn't think so.

The following are some '90s cartoons kids and adults can watch together.

I would follow Arnold and crew to the ends of the world and back, because, for a kid, their adventures are just fun. And, for the adult, you really get to take in the extensiveness of the world Arnold lived in and it's wonderful.

If you're a kid, all you see of Rocko's Modern Life is a wallaby, a cow, and a turtle getting into slapstick adventures. If you're an adult, you learn Rocko has gone through a lot of similar struggles to you — he's a post-grad just trying to make his way in the world with little to no common sense. I feel that.

This late '90s early '00s show is fun for both children and adults simply because the representation of jungle life is visually stunning. I don't care how old I am. I will always get excited about penguins. Oh, and Tim Curry is Nigel, which is a totally cool bonus for adults.

This show had such great girl power. Three little girls saving the day, every day? I could totally use a pick-me-up like that (especially after paying the rent). It's fun and colorful for children, but also full of adult humor and inspiration for adults who need a smile.

The characters in Doug are so fun. A kid will enjoy them, and an adult can really appreciate them for the goofy exaggeration of real people that they are.

7. Pinky And The Brain

The Brain is just as salty about the world as you are. His exploits alongside his idiotic sidekick are perfect for the mad-as-hell-and-not-going-to-take-it-anymore adult. Kids will be upset that he was being so mean to Pinky — or take notes on his takeover schemes, I don't know — but adults will get it.

For kids, the fact that the Beaver brothers were grouchy will be really funny. For adults, the wit behind their dialogue really peeps through. That appreciation becomes even stronger when one sees how meta the show got. In the final episode created, for example, the characters were aware they were in a cartoon that was about to end.

For adults who have probably now seen a zillion superhero movies, Freakazoid!, with its casual parodies of a lot of superhero tropes, is so funny. Freakazoid/Dexter Douglas's goofy behavior is also really entertaining to children.

This show is great for kids, because it makes monsters seem less intimidating. And it's great for adults, because the monsters are so goofy that it's really hard not to be impressed by them.

Taz-mania follows the silly exploits of Taz, the Tasmanian devil from Looney Tunes, in his own adventures at home. It follows the age-old trick of slapstick for the kids and darker underlying jokes for adults.

If you like superhero movies and TV shows, then whether or not the show is animated really shouldn't make much of a difference. This version of Spider-Man is arguably better than a lot of the movies out there, so adults can definitely get down with it alongside the kids.

Children come for all the butt humor, and adults stay for the surreal and completely hilarious high-brow jokes. (OK, and low-brow ones. Whatever.)

Arthur is simply a sweet show. In a time where we watch a lot of really depressing or dark stuff, sometimes it's nice to go back to basics with a little sweet talk and adorable characters that you and your niece or nephew can watch together.

Next time you're babysitting or whatever, boot up one of these TV shows. They're an animated wonderland with something for both children and adults.

More like this
The 'Hocus Pocus' Sequel Finally Has A Release Date & It Makes Total Sense
By Shannon Barbour and Radhika Menon
David Schwimmer Doesn't Remember This Classic 'Friends' Episode
By Sam Ramsden
Hayden Panettiere Will Return For 'Scream 6': "We F*cking Won, Scream Fam"
By Jack Irvin and Jake Viswanath
'Derry Girls' Sister Michael Isn’t As Fictional As You Might Think
By Olivia-Anne Cleary
Get Even More From Bustle — Sign Up For The Newsletter