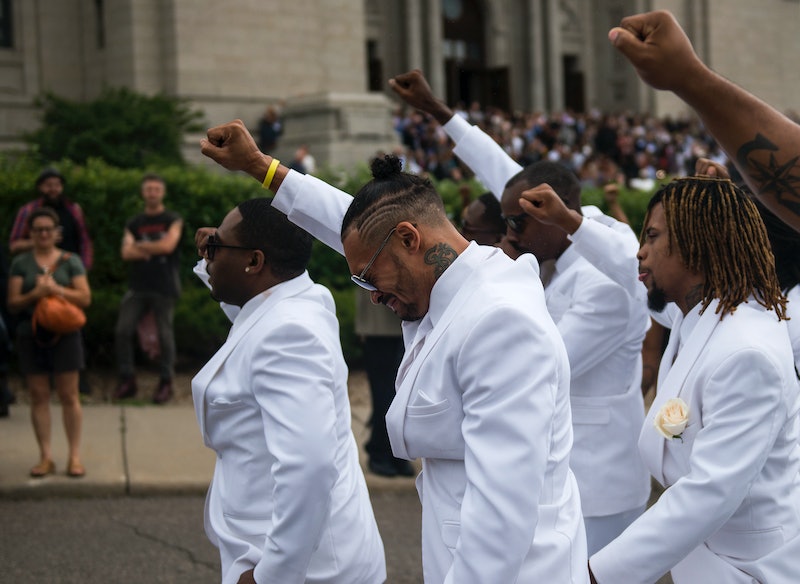 July 16, 2016 would have been Philando Castile's 33rd birthday. His friends and family thought they would be celebrating with him. But after St. Anthony Police Officer Jeronimo Yanez fatally shot Castile in a suburb of St. Paul, Minnesota, they were instead grappling with loss. What two filmmakers wanted to show, less than two weeks after Castile was shot, was that after most reporters had left, Castile's community was still grieving, and the short film "Happy Birthday Philando Castile" focuses on Castile's loved ones as they commemorated what should have been a day of celebration.

Film director Mohammad Gorjestani and producer Malcolm Pullinger created this eight-minute-long film through their film company, Even/Odd. They also partnered with the Campaign for Black Male Achievement in the process. Gorjestani told Mic that in the film, they intentionally create a contrast between the "high production" treatment a documentary typically receives and the smartphone camera footage that has helped expose incidents of police brutality.

"Happy Birthday Philando Castile" opens with St. Paul community members standing together in honor of Castile's life. They pray together, and they march together to celebrate Castile on his birthday and to demand justice. The rest of the film, however, doesn't focus on the protests that erupted in the days following Castile's death. It instead takes place in a room where some of the people closest to Castile are gathered.

They lit candles on a cake bearing Castile's name, as well as a picture of him. They then talked about Castile — or Cheddar Phil, as they knew him — in a series of clips that alternate between high-definition video footage and grainy smartphone camera images. In doing this, Gorjestani and Pullinger paid tribute to the fact that Castile's girlfriend livestreamed his death so that people would know what happened. Moreover, Castile's friends and family were given a chance to talk about Castile as they knew him, about how he knew the names of all the kids at the school where he worked, and about how his community had learned so much from him.

In a phone interview with Mic, Gorjestani explained why this story was so important for him to tell, and why the birthday theme was intentional.

These are very thoughtful people that this has happened to. For me, the root of all this is these families, these communities and the victims. ... A birthday is supposed to represent an advancement in life. In this case, it's the exact opposite.

This isn't the first time Even/Odd has made birthday-themed short films: in 2015, Even/Odd released a video of the Rev. Wanda Johnson celebrating her son's birthday. Her son, Oscar Grant, was fatally shot in 2009 by a Bay Area Rapid Transit police officer in Oakland, California. Similarly, Even/Odd has also wrapped up a birthday-themed video of Mario Woods' mother, Gwendolyn. Woods was killed by San Francisco police officers back in December, and according to The Guardian, Even/Odd expects to release this film soon.

These "Happy Birthday" films have become something of a series, in order to celebrate the lives of the black men who have been shot dead by police officers while simultaneously humanizing and amplifying the voices of those who are still grieving their loss. Gorjestani explained to The Guardian that he and Pullinger wanted to provide Castile's loved ones with "comfortable environments where they could speak from an unguarded space a little." He said that in the immediate aftermath of Castile's death, his loved ones were only able to speak through lawyers and with "microphones shoved in their faces." Rather than perpetuate that trend, Gorjestani told the New York Daily News that he wants this film's viewers to "step back" from viral videos and the 24-hour news cycle to really listen to what Castile's friends and family have to say, even and especially after the media spotlight isn't trained on them.

"We wanted to send the camera past the headlines and that initial time when the loved ones are so angry and shocked," Gorjestani told the Daily News. "I was more interested in the quiet emotion, the one that sticks to your bones."

These films are so important precisely because the voices of those left behind desperately need to be heard in the fight for justice. "You know we talk about next steps," said one friend of Castile's in the film, identified only as "Wax." "Everybody always asks, 'what's the next steps? What're you guys going to do next?' You know what we're going to do? We're going to grieve." And that's exactly what the film portrays.