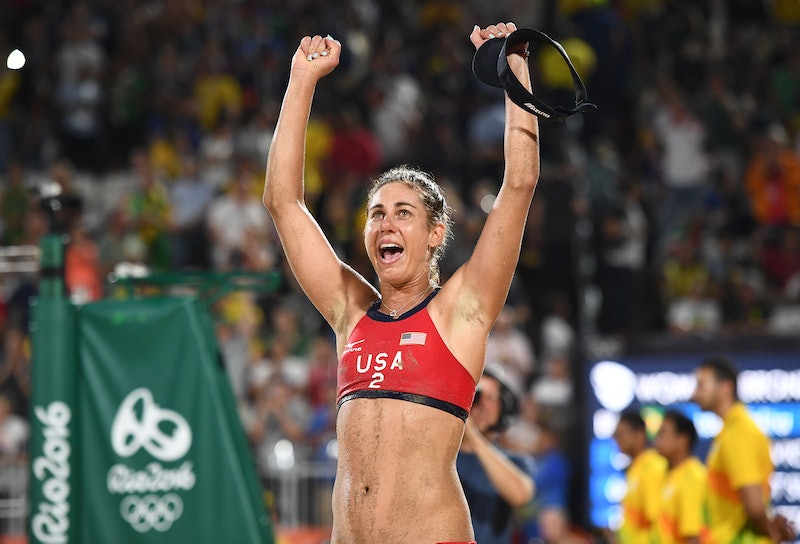 The Rio Olympics concluded with a spectacular Closing Ceremony last Sunday, but for American volleyball player April Ross, it's finally time to take a breather. "I am really looking forward to playing the last couple of tournaments [partner Kerri Walsh Jennings and I] have because I feel like the pressure is off," Ross tells Bustle over email. "We definitely still want to go in to win, but it will also be fun — kind of like our victory tour."

Ross has had many victories over the course of her career as one of the world's foremost volleyball players, but her most recent is also one of the most notable. In the last week of the Rio Olympics, she and Walsh Jennings took the bronze in women's beach volleyball after an initial set loss against Brazil's Larissa Franca and Talita Antunes. Between the two of them, the pair has now earned six Olympic medals: Walsh Jennings won three consecutive golds in prior Olympic Games, while Ross won silver in the 2012 Summer Olympics. In fact, the partners used to be competitors — Ross's silver medal came after she and then-partner Jennifer Kessy were defeated by Walsh Jennings and Misty May Treanor in London. When asked about any lingering rivalry, however, Ross says their partnership was the natural next step after the London Olympics.

"It was definitely sad to end my partnership with Jen [Kessy] because we had such an amazing run and she’s one of my favorite people on the planet, but to partner with Kerri was the obvious choice for me," Ross writes. "It’s a dream come true — she's recognized as one [of], if not the best, beach volley ball player[s] to have ever played, so I’ve learned a lot and have grown so much being around her over the past few years. It’s been nothing short of amazing."

Although Ross may be one of the most well-known volleyball players today, it wasn't always her sport of choice. "I loved soccer growing up — I was pretty good at it and I thought it was going to be my road to success in sports," she tells Bustle. After her club team folded, however, she turned her attention to the sport many of her friends were playing: Volleyball. "My dad saw that I was taller and might be good at it and pushed me to try out," she explains. "I ended up loving it from the very first moment! It felt so surreal to eventually qualify for my first Olympics [in 2012]."

Now that she has a second Olympics under her belt, Ross plans on taking a well-deserved vacation after finishing up a few more tournaments. "I want to take a vacation — possibly to Italy — and then I’m going home and to my husband in Arizona and we’ll try to start a family," she writes. In the meantime, her newest Olympic medal will join her silver from 2012 in an unconventional display. "My Olympic medals hang on a ceramic moose that is above my fireplace!" she says.

So what does a typical day look like when she isn't out winning Olympic medals and world championships? "I get up around 6:30 a.m., grab breakfast and a coffee and then drive an hour and a half to practice," Ross says. After two hours of practice, she gets lunch and heads to Anaheim for two hours of weight training. "Physical therapy is my last stop before heading home to grab dinner, watch some TV, read a little bit or try to meditate and go to bed," she says.

Needless to say, all that time spent training in the sun takes a toll on her skin, so Ross makes sure to use sunscreen before practice and moisturizes afterward. She has a partnership with Aussie Hair Products as well, which she credits for keeping her hair healthy. "With all the time I spend on the court, my hair goes through quite a beating between the sun, sand and sweat and I don’t usually have the energy or time to put a lot of effort into making my hair look great again, so Aussie was the perfect partnership for me," Ross says. "Their products — like my favorite, Aussie 3 Minute Miracle Moist — are essential in making my hair look shiny, healthy and moisturized in a breeze both on and off the court."

On her days off, Ross keeps her schedule far more relaxed. "On my days off I like to pamper myself — I get a ton of rest, go shopping, hang out at home and do a face mask, or get a mani-pedi," Ross says. It probably comes as no surprise to hear that she follows indoor volleyball, but she also watches football. "I keep up with the NFL, specifically the Seahawks," she adds. "I love them and will go somewhere and [root] for them every Sunday."

Finally, Ross has advice for those who dream of competing in the next Summer Olympics. "The biggest piece of advice I have for aspiring Olympians is to demand the best from yourself every day," she writes. "It doesn’t mean you have to play your best every day, you just have to try as best as you can and play with integrity and character."

More like this
Here's Your Horoscope For Memorial Day Weekend
By Mecca Woods
Your June 2022 Monthly Tarot Reading
By Jezmina Von Thiele
Are We Drinking Rosé All Wrong?
By Sheila Yasmin Marikar
TikTok's Favorite Bartender Thinks Mimosas & Bloody Marys Are Out For Brunch
By Alexis Morillo
Get Even More From Bustle — Sign Up For The Newsletter