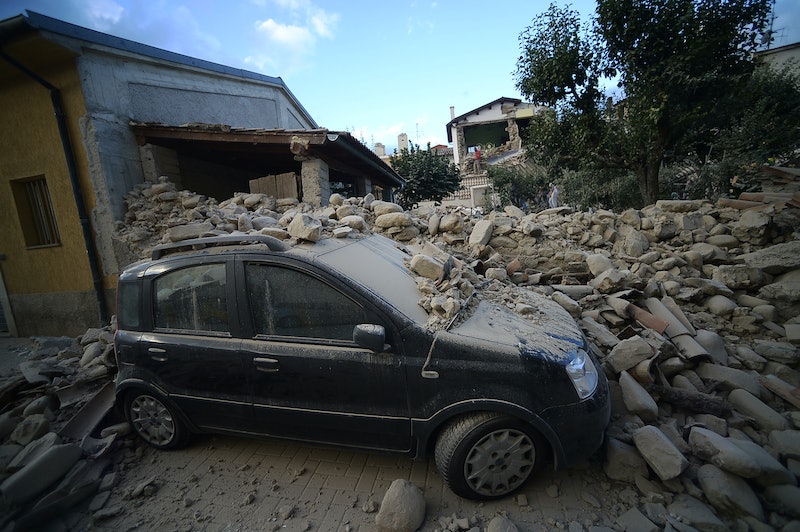 As the devastating 6.2 magnitude earthquake in central Italy ended, photos revealed the extent of the damage in cities including Amatrice, Accumoli, and Norcia, among others early Wednesday morning. Rome, which is located over 100 miles away from the region, even felt the violent tremors. Sergio Pirozzi, the mayor of Amatrice, was one of the first to make a statement regarding the physical state of one of the areas majorly affected by the natural disaster. Update: The death toll has continued to rise throughout Wednesday and is expected to continue doing so. You can research ways you can help here.

Earlier: According to The New York Times, he said, "Half the town no longer exists," adding, "There are people stuck in the rubble. ... Houses are no longer there." During a live broadcast, he explained that roads and the bridge had seen too much damage to allow anyone into or out of the city for the time being and issued a call for help to clear the roads.

Search and rescue teams, as well as volunteers, led efforts to dig through rubble for survivors and according to the mayor of Accumoli, at least several of those found under the collapsed buildings and homes tragically haven't shown signs of life.

Not all of the damage was done by the initial tremor, however. Certain towns, such as Norcia, experienced devastating aftershocks that amounted to a 5.5 magnitude, CNN reported.

The photos and videos of the event, taken by both reporters and bystanders on the ground, show why international assistance during these tragic times is absolutely vital to the recovery of this region.

Though some photos suggest search and rescue missions are being carried out successfully, others depict victims mourning the tragic loss of their loved ones.

One family reported that their bathroom ceiling fell through. Some homes crumbled completely.

This aerial shot and video of the damage are particularly terrifying, giving new immediacy to Mayor Pirozzi's statement that half of the town has collapsed.

Though updates on the aftermath of the disaster are still flowing in, one thing is for certain: Italy needs assistance from the international community. If you would like to help, you can donate funds to organizations such as the Italian Red Cross, help search for survivors if you're in the area, or show your support and raise awareness via social media.

More like this
How To See The Lunar Eclipse On May 15-16, 2022
By Kaitlyn Wylde
Michigan’s Governor Is “Going To Fight Like Hell” To Protect Abortion Access
By Andrea Zelinski
How To Fight For Reproductive Rights, Based On How Much Time You Have
By Courtney Young
The Music Industry Continues To Fail Black Women
By Precious Adesina
Get Even More From Bustle — Sign Up For The Newsletter