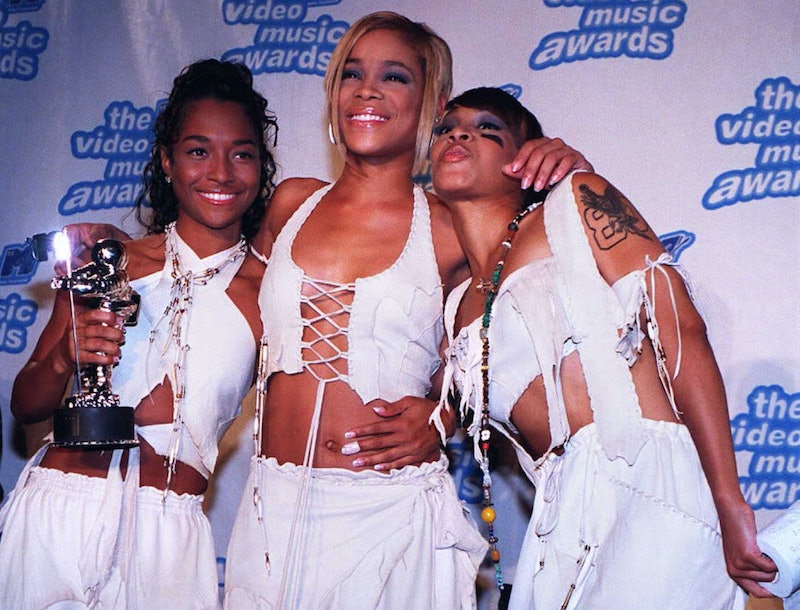 It seems that no matter what new trends surface over the years, '90s looks will still be seen time and time again on runways, red carpets, and in candid snaps of celebrities out and about. Hopefully this year will be no exception and we'll see '90s looks at the VMAs in 2016.

I doubt that anyone will be bringing back the oh-so-iconic purple mermaid look that Lil'Kim served us in 1999 — especially after Miley Cyrus copied her for Halloween in 2013. But there are sure to be at least some influences from the 1990s reflected in this year's MTV Video Music Awards red carpet.

In fact, quintessential '90s looks have been seen on many red carpets already this year. But for whatever reason, the VMAs always bring out the wilder sides of celebrity style. I mean, remember that Rose McGowan dress that was, coincidentally, inspiration to Amber Rose's 2014 VMAs look?

Another great example of how '90s red carpets looks are recycled and renewed for these occasions comes via Katy Perry, who rocked her own version of the infamous Britney Spears and Justin Timberlake all-denim VMAs look with rapper Riff Raff in 2014. Hopefully this year will see more major '90s looks on the VMAs red carpets, and these are amongst those I'm dying to catch a glimpse of.

If any group has ever owned coordinated outfits, it was TLC. But fingers crossed that a 2016 band will feel brave enough to try to recreate this '90s trend.

Be it Pharrell or Pamela Anderson, a giant hat is always a certified look, IMO. Especially if it's entirely made of pink fur.

If celebs opt to dress down on red carpets this year, I'm hoping that translates to the low-rise fit that was definitely a '90s staple first.

In 1998, Mariah Carey rocked an outfit to the VMAs that wouldn't be out of place in 2016: A low-cut dress paired with a chunky heel.

D'arcy Wretzky of Smashing Pumpkins looked like she could've walked straight off the set off Clueless in this simple slip dress, a glossy blonde up-do, and a plain silver necklace. After all, minimalism was oh-so-chic in the '90s and we are definitely seeing this low-key trend coming back as of late.

Before there was Taylor Swift's girl squad, there was Drew Barrymore in literally the best red carpet look of all time, with the equally gorgeous Courtney Love. I know which group I'd prefer to party with.

I don't know which trend we're more likely to see from this VMAs look: All-white-everything or lace-up tops. But I'm putting my money on the latter. Bonus points if people pull it off as well as TLC did here.

If Ariana Grande is attending, there's no doubt we're going to see this look.

OK, OK: I just really wanted to include this ensemble because it's the definition of iconic. That said, celebrities like Miley Cyrus have been seen wearing pasties recently anyway, so it wouldn't be too much of a stretch to peak this trend on the 2016 VMAs red carpet.

I am far from the first person to advocate for keeping the '90s alive in current fashion. But when it comes to reviving major moments in pop culture history, I'm here for it.

Out of everyone, however, I'm excited to see what Amber Rose brings to the VMAs red carpet, especially after her 2014 Rose McGowan revival and her 2015 anti-slut shaming bodysuit look. Fingers crossed that the businesswoman and talk show host will recreate a '90s aesthetic next.