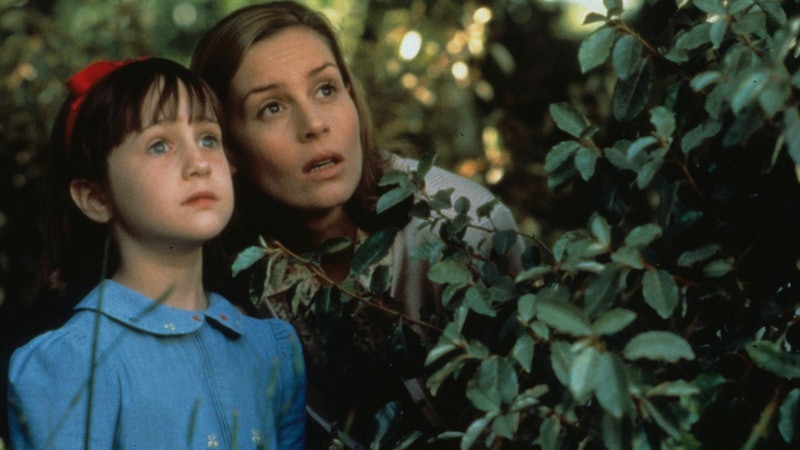 If Roald Dahl was alive today, he would just have turned a whopping 100 years old. It's been a full century since the man was born who would give us Oompa Loompas and Friendly Giants, golden tickets and giant peaches. We got some feminist lessons from Roald Dahl; we got a life-long fear of witches; and of course, we got our never-ending passion for library books. Without Roald Dahl, we never would have had Matilda Wormwood — and (I shudder to even think it) without Matilda Wormwood, would we ever have had Hermione Granger? Yikes.

Growing up with Roald Dahl's books inspired young girls across the world to dream bigger, to read more, and to fight back against a system that tries to push them down. And of course, Roald Dahl learned all that from a woman in the first place: in Dahl's autobiography, he made it clear that it was his mother who had the primary influence on his life as well. So it should come as no great surprise that from The Witches to The BFG to Matilda, there are a ton of feminist lessons to be learned from reading Roald Dahl's back catalogue.

Here are six that inspired me as a child — and still today.

1. Women can be heroes

Matilda Wormwood was a feminist inspiration to so many young girls growing up — and it's easy to see why. Matilda didn't have much going for her: she was neglected by her parents; she was terrorized by her headteacher; she was discouraged from following her true passion for reading. But none of that stopped her from becoming the hero of her own story: she was crazy smart, super brave — oh yeah, and she had magical powers. I would spend hours in my bedroom trying to make cereal move on its own, and while it sadly never worked, something even more magical was happening without my even knowing it: I was learning to believe in myself.

2. Women can be action heroes

In the rare instances that we came across female heroes in our childhood books, they tended to be bookish, intellectual, dignified heroes like Matilda or Hermione Granger — who use more traditionally feminine qualities to be powerful. There's nothing wrong with this — in fact, it's awesome — but Roald Dahl showed us that there is more than one way of being a strong woman. Enter Sophie from The BFG: she plays the part of the typical male action hero with gusto — and even stops for a good fart joke.

3. Women can be heroes and villains

The Witches is one of my all-time favorites — partly because the book is absolutely terrifying, and partly because women take the roles of both heroes and villains, and they do it damn well. While Luke is technically the main character, he spends a lot of the novel as a mouse, so he doesn't inspire much awe. The real forces to be reckoned with are Grandmamma and the Grand High Witch: two equally powerful women, despite not having any of the qualities (like youth or beauty) that are usually demanded of women before society can respect them.

4. Women can have more than one role

A lot of female characters in fiction are forced into strict boxes: they can be the loving mother or they can be the career woman, but never both. Miss Honey from Matilda , however, breaks through this. She has a career, but she is never caricatured as man-repellent, selfish, or any of the other offensive stereotypes often assigned to women with jobs. At the end of the novel, she adopts Matilda and becomes a mother — but she's not reduced to the doting housewife. Oh, and she never needs a man in either of those roles.

5. Women don't deserve to be overlooked

The way Mr. Wormwood treats his children is a pretty good metaphor for society as a whole: he overlooks a quite clearly brilliant girl in favor of his totally mediocre son — just because he's a boy. And oh man, did he make a mistake. Matilda should never have been overlooked by her father — and it comes back to bite him in the ass when he ends up with bleached hair, superglue in his hat, and eventually, being forced to flee the country when his criminal car dealings are exposed.

6. Gender roles are just a product of society

Some people try to justify the dismal statistics of women in management positions by claiming that men and women naturally fill different roles. This is ridiculous — and Roald Dahl knew it. In his collection of morbid short stories, Tales of the Unexpected , Dahl parodies gender roles by having bored housewives rise up and enact morbid revenge on those who oppressed them. It's pretty clear they didn't choose to be stuck at home — and they weren't going to stand for it.