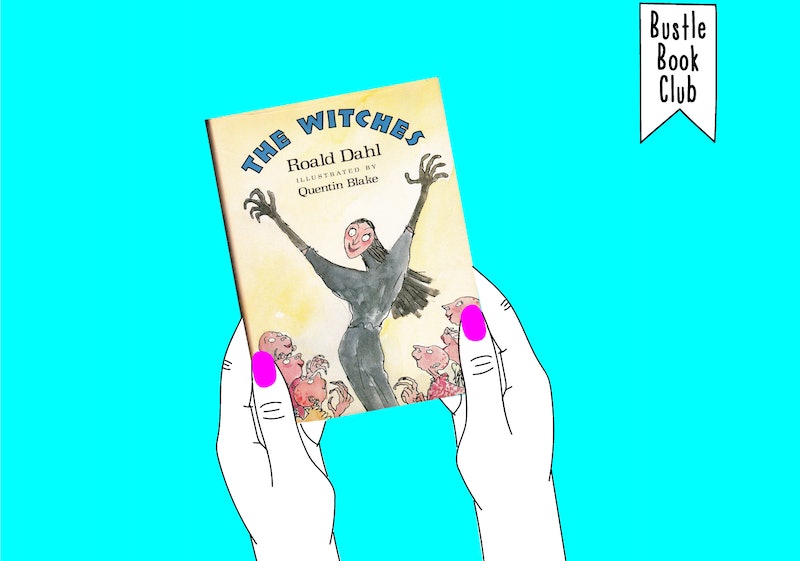 The Bustle Book Club with Alloy Entertainment discusses nostalgic books that are meaningful to us. This month's pick is "The Witches" by Roald Dahl, a discussion with "You" and "Hidden Bodies" author Caroline Kepnes.

As a child, I would have told you that my favorite Roald Dahl books were The Twits and The Witches. I loved The Twits for its suggestion that ugly thoughts will make you into a physically ugly person. I used to go around the neighborhood with my brother, wondering if any of our neighbors were twits, if they had pet monkeys. As an adult, I still search for Mr. and Mrs. Twit. (Most recently I found the twits in Gone Baby Gone. They’re the agoraphobic cocaine addicts harboring a pedophile. Grim, yes.)

And then my beloved The Witches, a book that taught me to beware of women wearing gloves. You read that book and realize that all mice might, in fact, be children, children just like you. And of course The Witches capitalized on that most primal fear: Your parents die and your world is turned upside down.

You pick it up as an adult and whoa. There’s a whole other book in there — a hilarious, feminist commentary on women, work and family. Here are seven feminist lessons I learned from The Witches:

It brings me back to those Compare/Contrast essays of high school, so let’s do it.

Both women are indeed “grand." Grandmamma is the sole matriarch, the decision maker. The Grand High Witch is the leader. Both women travel extensively (relatively) to fulfill their duties. Grandmamma carries a giant purse (all the better to transport mouse-boys) whereas The Grand High Witch hides her precious belongings in a mattress (forgetting that mouse-boys can access said belongings).

But Grandmamma is the true star of the book. She is bright, enchanting, a master storyteller. She is the centerpiece of this book, the teacher. She smokes cigars. She keeps her secrets. She isn’t afraid to carry a couple of mice in her purse. She is our leader, our storyteller. Sure, the boy (who is unnamed) owns the narrative. He’s the one doing the legwork, but Grandmamma is the wise one, the leader. Time and again, Dahl reminds us of her overall strength. She is the guardian of her orphaned grandson. She overcomes illness and is able to take her boy on vacation. She is reasonable at every turn — the opposite of hysterical.

The Grand High Witch, on the other hand, is a brilliant scientist and marketing whiz. She uses Machiavellian tactics to keep her minions in line. She does have a few stereotypically female tricks up her long sleeve; she shares her recipe with her followers. But she prioritizes her power over all else. She’s impatient. Perhaps if she’d taken the time to focus on mentoring one individual instead of ruling many...

Well, in Dahl’s story, the woman who simultaneously nurtures and educates prevails while the power hungry witch loses.

2. The existential whoa moment about gender and power.

It’s right there in the first chapter. There’s a kind of riddle about witches. We think of them as women. After all, they look like women. According to the boy — who learned from Grandmamma, “A witch is always a woman" — you can’t be a witch unless you’re a woman. Similarly, ghouls are all male. But no ghoul is “half as dangerous as a REAL WITCH." So in other words, witches rule.

But then a few pages later, Grandmamma reminds us that witches are demons. They are neither women nor men. They’re “demons dressed like women." So in other words, these demons came to earth and decided they would have more power to destroy children if they dressed up as women instead of men.

And then you start to realize this story is unique because the men in this book are invisible or ineffective. The boy’s father is dead. The witches openly mock the peevish hotel manager. The boy, our hero, he never even becomes a man. He becomes a mouse.

3. Witches accessorize and wear lots of makeup, but they don’t do it to attract men.

In order to pass as a kind, sweet woman, a witch must accessorize. She covers up her toe-less feet with pointy shoes. Walking is, thus, difficult and painful. And witches are extremely sensitive; to them, children smell like “dog droppings." She has to wear gloves. She has to wear a wig…

It’s a science-fiction version of an Allure spread on contour and illusion. Looking feminine is portrayed as something that is physically exhausting. And then you wonder, which came first: the desire to mutilate all children or the societal pressure to have dainty phalanges and shiny hair?

4. Not wanting children is not the same as wanting to destroy children.

And you thought you were bad for trying to get out of attending a baby shower. In a culture that judges women so harshly for either dedicating themselves wholly to motherhood or choosing to balance children and work, it’s exciting to see a book with female villains who are actually, you know, evil. There’s a big difference between not wanting to produce children and setting out to exterminate children. You got that, world?

5. The male gaze will endanger the male. But the female gaze can kill all of us.

Dahl is so exquisite in bringing us into the scene. We are with the boy, hiding, peering at all the women as they gather and peel off their accessories. A nefarious strip tease, the opposite of strip poker where the more naked these women become, the more repugnant they are. The boy cannot escape and he is, in fact, an enemy because he witnessed this secret ritual. Meanwhile, yes. A witch can look at you and kill you.

It’s 2016, and the idea that women deserve equal pay is still, sadly, a hot button issue. There’s something about the idea of women prospering that brings up anxiety in our culture, which is why the witch conference is probably my favorite part of this book. What a brilliant, assembly of “business women."

The Grand High Witch invented the powder to transform children into mice (science!) and she will control distribution (business!) and she will teach the witches to make the powder in bulk (feminism!). And the witches are supposed to return to their hometowns and open their own candy stores (franchise!). The Grand High Witch is also respectful of her diverse audience. She brought a stash of the powder for the witches who are too old to handle the rigorous process of creating it (no ageism here!).

So basically, the success of a “woman” as a scientist and a leader leads directly to the mass murder of little children. Ha. And then the inherent twist, the get-out-of-sexism free card: Technically, a witch isn’t a woman.

7. “What’s so wonderful about being a little boy, anyway?”

Throughout The Witches, the child is painted as a burden. The unnamed boy narrator is orphaned. Because of him, Grandmamma must leave her beloved Norway. She has to sacrifice her vacation plans. Then there is bratty, hungry Bruno. He’s nasty to other children and his own parents want nothing to do with him. The hotel manager does not have patience for the boy wanting to let mice run around the hotel. The most universal message of this book is about shape shifting.

Dahl seems to be telling us that if your heart is in the right place, anything is possible. The witches are doomed because they turn the boy into a mouse. They look at him and see a mere boy. They don’t realize that a woman has educated him and protected him.

Ultimately, Grandmamma and her grandson (and several cats) are capable to kill off demons. Men and women, when they work together, really can accomplish great feats and make the world a safer place. But that’s the key: we have to recognize that we need each other. We thrive as equal partners. Otherwise, the Witches will destroy all the children and there will be no human race. (#AlternateEnding)