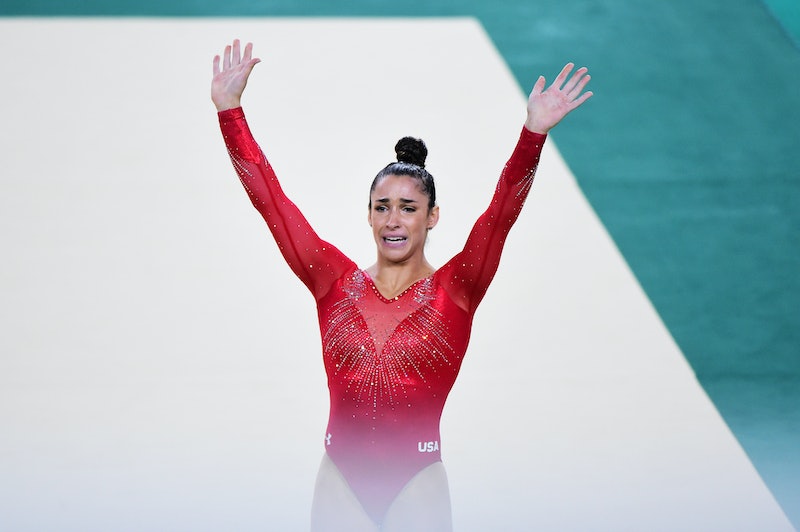 Hot off their success at the Rio Olympics, the Final Five has some free time stretching out ahead of them, so what I'm wondering is, will Aly Raisman be at the VMAs? Obviously, the 22-year old gymnast isn't up for any awards. However, she earned enough hardware at the Games to last her for quite a while — she added a gold and two silvers from Rio to her two golds and one bronze from London — so this would be a great opportunity for her to relax. Anyone who works as hard as Raisman does should be able to play hard too, once in a while. And, to be honest, an appearance at the Video Music Awards would be a great opportunity for us to soak up more of Raisman before she disappears back into the world of training; even though she hasn't yet decided whether she'll be in Tokyo in 2020 yet, we shouldn't count the veteran team captain out.

But a little party on a Sunday night in late August is far from the commitment of the Summer Games, so should we expect to see Raisman in attendance? I'm betting that she's a big enough name to at least pull an invite, considering her recent athletic achievements — not to mention her parents' reactions to her all-around performance going viral — but would she show up? I'd consider it likely, given that Raisman and the rest of her team were guests on The Tonight Show, proving they're comfortable on television even when it means exchanging the vault for the talkshow couch.

But the main reason that I'm guessing Raisman would snap up an invite if one was extended can be found in the video below.

Um hello, Zac Efron shirtless? If there's even a slight chance that history could repeat itself, and that torso could be bared onstage again, I'm betting Raisman would want to be front and center for it. She and the rest of her Team USA teammates were swooning over Efron their entire time at Rio — in between demolishing the competition, of course — so the possibility of running into him at the biggest part of the year will likely be tough to pass up. At least, this is what I'm hoping, because I'm not ready to go another four years without Aly Raisman in my life; gotta enjoy every last moment.

More like this
What Is Jeanie Buss' Net Worth? The Lakers President Is Uber Rich
By Hugh McIntyre
Lisa Marie Presley Reviewed Baz Luhrmann’s ‘Elvis’ Movie On Twitter
By Grace Wehniainen
Is Megan Fox Pregnant? MGK Gave A Shout-Out To Their “Unborn Child” Onstage
By Hugh McIntyre
Stormi Just Walked A Red Carpet With Mommy Kylie Jenner & Daddy Travis Scott
By Hugh McIntyre
Get Even More From Bustle — Sign Up For The Newsletter