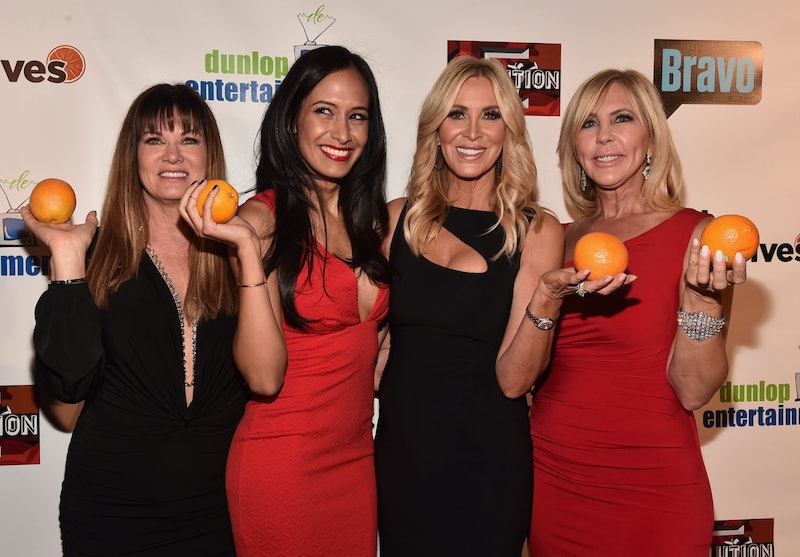 Almost every time a friend texts me to ask what I'm doing or what my plans are for the night my answer is "Watching Real Housewives lol." If it seems like Real Housewives is always on TV that's because it pretty much is. And I'm happy about that because there is no way I will ever stop watching Real Housewives. No matter how many franchises they add or how many times I watch the same episodes over and over, I will never tire of the show.

There a lot of people who understand and share my obsession, but there also plenty of people who question my devotion to the series. For the most part, I try to avoid that kind of negativity and other times I just try to persuade people to join in on my lifestyle.

The franchise just has so much to offer. It provides stability since I know that there will always be a Real Housewives of some city airing new episodes soon. On the other hand, there is always something new and exciting happening. Real Housewives will never ever get stale.

These are some of the reasons why I will never get over watching Real Housewives.

These women really do say the darnedest things. You never know what's going to come out of their mouths, but it's almost always quotable and instant meme material.

At this point, the big moments on Real Housewives have become iconic. For instance, I'm pretty sure that everyone on the planet has seen the infamous Teresa Giudice table flip.

The Real Housewives cast lets the fans into many aspects of their lives, including problems with their spouses and children. As the title of the franchise suggests, these women keep it "real." Plus, Real Housewives of Beverly Hills and Real Housewives of New Jersey actually have cast members who are related, which is compelling to watch.

When it comes down to it, we are all human, but these ladies have problems that I could never imagine. I'll never forget Vicki Gunvalson flipping out when a car service sent a family van to pick her up on Real Housewives of Orange County. These ladies are all about living luxurious lives, so it's interesting to see them coping when their stylish demands don't go their way.

There are so many different Real Housewives shows and each one has its own unique vibe based on the city it's in. They may all have the words "Real Housewives" in the title, but every one of the shows is unique enough to stand on its own.

Although it can be kind of annoying to watch the women constantly talking up their businesses and bringing up their products that they want to sell during completely unrelated conversations, I personally find it hilarious. A shameless plug never fails to amuse me.

I've always thought that the Real Housewives children could have their own spinoff show. They are just so entertaining and quotable all the time.

Real Housewives never runs out of drama. Truth really is stranger than fiction. From the feuds between cast members to mysterious illnesses to jail time, there is always something shocking going down.

These ladies have the most extravagant parties pretty much once a week and always for the most random reasons. Kyle Richards has a white party every year on Real Housewives of Beverly Hills. Shannon Beador had a party to celebrate being an Aries on Real Housewives of Orange County. Heather Dubrow even threw an event to celebrate changing her last name from her maiden name to her married name.

12. The Attempts At Singing Careers

There is nothing I love more than a Real Housewife trying to launch a singing career. From Luann de Lesseps' "Money Can't Buy You Class" to Kim Zolciak's "Tardy for the Party," I really live for these songs. They are such guilty pleasures.

The women on Real Housewives are always turning up and dancing it out. It gives me life and makes me want to live vicariously through them.

So, if you aren't already addicted like me, now you know there are way too many reasons to watch this gem of a show.