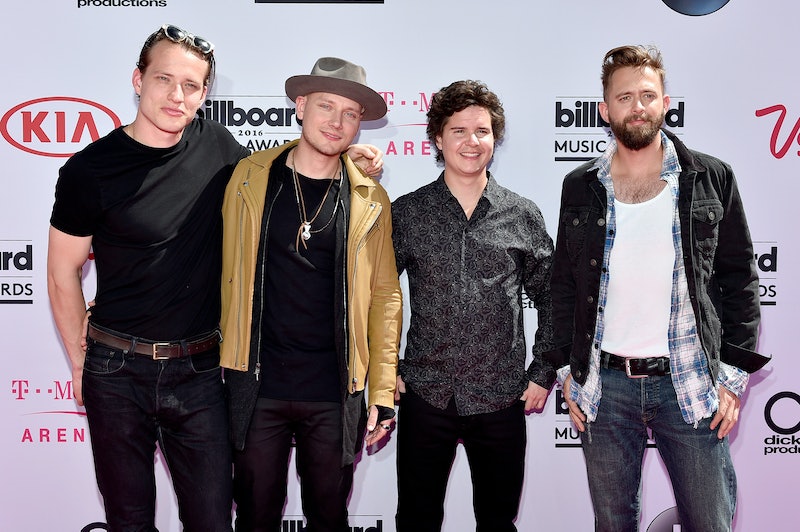 It might seem kind of confusing, but Lukas Graham is actually the name of the Danish band who sings "7 Years," aka their super-catchy single that probably made you google "once I was seven years old song" after you heard it on the radio (it is all over the radio). Lukas Graham is also the name of the lead singer in the group (real name: Lukas Forchhammer, but he's referred to as Lukas Graham), so yeah, it's easy to see how people get mixed up.

The Danish band is up for their first-ever MTV Video Music Award, and it's a big one: Best New Artist. They'll be battling it out against other newcomers like DNCE, Desiigner, Bryson Tiller, and Zara Larsson. So while the competition is stiff (I can see DNCE taking this one TBH), Lukas Graham's "7 Years" really did blow TF up over this past year: It went 3x platinum in the U.S. and hit No. 1 on the Billboard Top 40 chart. And speaking of the VMAs, the band is also set to perform their other single "Mama Said," at the VMAs pre-show on Sunday. Which means that for Lukas Graham fans, even if the band doesn't go home with the VMA, they're still in for a treat at the MTV award show this year.

As for the confusing name thing, Graham (the singer) told Billboard that Lukas Graham (the band) operates under his name (the "Graham" comes from his late father's middle name) because "I write the songs," he explained. "No ­matter how much I've tried, the other lads just aren't lyricists." The other members of the quartet — all in their late 20s and early 30s: Mark Falgren, Magnus Larsson, Kasper Daugaard were all childhood friends of Graham's while growing up near Copenhagen.

As for "7 Things," their smash hit single, Graham told the Huffington Post that "the song just flew out of me. ... [It] took two years to produce it and write the string arrangement and give it the life it has now."

“By the time we weeded out all the bad verses and the lines that weren’t good enough, we had that 7, 11, 20, 30, 60 stepping-stone evolution to it, which I found fascinating because it’s this age progression that captivates people," he revealed. "It's not necessarily a lot of beautiful lines and quotes in the song. It’s the age that captures people first because everyone is getting older. You can't stop that."

As for living in the moment, Graham — who will become a first-time dad in September — certainly has the VMAs to look forward to on Sunday.

More like this
Graham Norton’s 10 Best Eurovision Zingers Will Leave You Howling
By El Hunt
Selena Gomez Joked About Her Relationship Status In Her ‘SNL’ Monologue
By Grace Wehniainen
'Dirty Dancing's Jennifer Grey Wants Harry Styles To Be The Sequel’s Love Interest
By Grace Wehniainen
Becky G Once Had A Fear Of Speaking Spanish. Now She's Topping The Latin Charts
By Tess Garcia
Get Even More From Bustle — Sign Up For The Newsletter