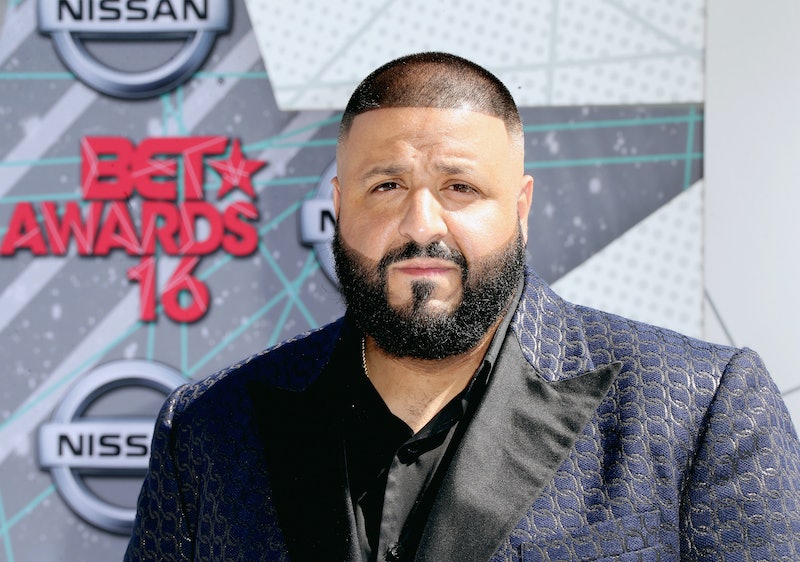 All DJ Khaled does is win, win, win no matter what, so it should come as no surprise that this music producer just scored a big gig. On Wednesday, MTV took to Instagram to announce that DJ Khaled will be hosting the MTV Video Music Awards pre-show, and while he won't be the host of the actual VMAs (MTV has yet to announce who will be taking the VMAs stage as the show's official host) he will be preparing us for the big event. It's the perfect job for SnapChat superstar Khaled, whom Billboard announced will also be a correspondent for the official show alongside Charlamagne Tha God and Lizzo from MTV’s Wonderland. With a show as long as the 2016 VMAs, we need someone particularly fun to kick us into the award show mood.

It's not just DJ Khaled fans who are stoked that the star will be hosting the pre-show. Khaled is just as hyped about being the show's hype man — and not at all modest about it. He told Billboard:

The VMAs is a show I've always wanted to be a part of and I'm a big fan of it ... For me to be involved in the pre-show as well as the main show, I'm excited. Put it this way — expect nothing but greatness and also expect the unexpected because when you got Khaled on the bill, ratings go extra high

Khaled isn't wrong — just look at this dude's SnapChat! Khaled's account, which you can follow under the name djkhaled305, is pretty much the reason you should open up the app. Whether he's recommending McDonald's oatmeal,

hanging out with the cast of Empire , or giving an impassioned speech on the treadmill, I could watch Khaled's Snap story for the length of a full TV episode. Naturally, I'm thrilled to be spending some pre-show time with the DJ... and you know that Khaled hosting the pre-show will mean he's going to make one seriously sweet SnapChat story.

Good call, MTV. Now give us someone equally as awesome for the host of the whole shebang.

More like this
Stormi Just Walked A Red Carpet With Mommy Kylie Jenner & Daddy Travis Scott
By Hugh McIntyre
Is Megan Fox Pregnant? MGK Gave A Shout-Out To Their “Unborn Child” Onstage
By Hugh McIntyre
Twitter Is Upset About The 'American Idol' Top 3 Results: "Who TF Is Voting?"
By Jake Viswanath
How 2 'American Idol' Singers Performed With COVID-19 & Made It Into The Top 5
By Jake Viswanath
Get Even More From Bustle — Sign Up For The Newsletter