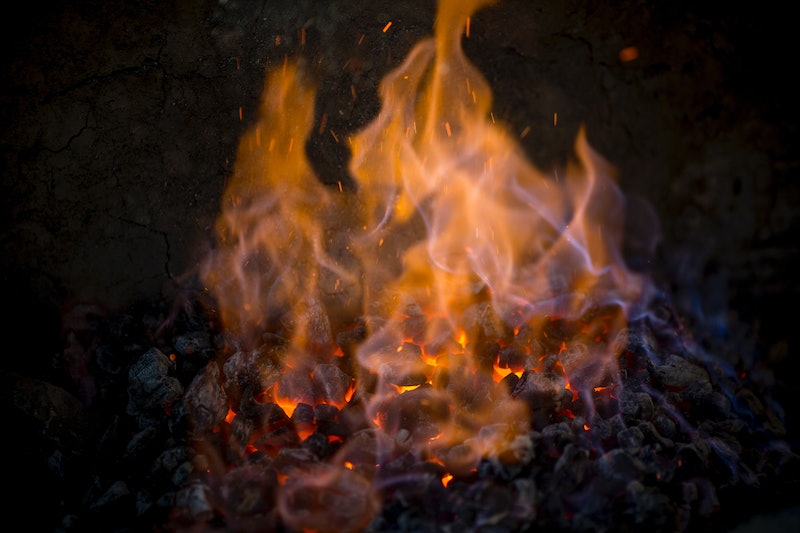 Halloween for me is like Christmas for most people. I love the creepy, scary, gory, macabre. But in my book, it's always a good time for a chilling ghost story or adrenaline-pumping horror flick, whether or not it's anywhere close to Halloween season — which is exactly why I love the stories of these badass female ghosts. There's something about the afterlife that is utterly fascinating; add to that the fact that these lady ghosts are unforgettable — sometimes for really cool reasons, and sometimes for really terrifying ones — and, well... 10 bucks says these ghost stories make the hairs on your neck stand up.

Many of these tales are enveloped in mystery, confusion, and unanswered questions, which just makes them even creepier. How did these women die? Why didn't they fully cross over? Why have they stuck around to scare the buhjeezies out of the living? We may never know.

But what I love most about these stories is that many of the women came from a time when ladies were supposed to be soft-spoken, subservient, and inconspicuous. (Or at least, from a time when the culture was a little more overt about these expectations; they're unfortunately things that we still struggle with today, just in subtler ways.) The rules of the dead are different, however; and after they left this dimension, they started playing by a different game. Mwaha!

Since we only have 66 days until Halloween (ahhhh! So excited!), we better get started now with the spooky stories, starting with these six ladies.

Madame Marie Delphine LaLaurie is extra special, because according to some, she's America's first female serial killer. She was considered a social elite back in the 1830s; but when an 1834 fire burned down her New Orleans home, people discovered some dark truths. When neighbors came in to help during the fire, sounds of screaming led them to a locked door. Inside, they found chained up slaves, tortured beyond belief. Later on, corpses were found under the floorboards of the house.

Madame LaLaurie was chased out of town and died in 1849 in Paris. In death, she seems to despise children specifically: Her ghost has reportedly been seen walking the property of her old home, and frequently lingering around kids while holding a whip.

The story of the Bell Witch tells the tale of a sinister entity that haunted the Bell family from 1817 to around 1821 in Adams, Tennessee. John Bell, Sr. worked as a farmer to take care of his family. The poltergeist, reportedly named Kate, would play all kinds of terrifying tricks on the family, frequently targeting the youngest Bell daughter, Betsy. Kate would curse the Bell family out loud; and there are several reports of strange scratching noises coming from outside, rats gnawing at the bedposts, objects being thrown around, and an encounter with a strange creature that was half dog and half rabbit.

No one knows for sure why the Bells were targeted. Some say Bell had cheated Kate in the past. Others say it was actually a slave whom Bell had killed. No one knows what happened to Bell, either. Rumor says he was mysteriously poisoned.

3. The Woman With The Slit Mouth

A Japanese urban legend shares the story of a ghost known as Kuchisake-onna who reportedly first made herself known in the late 1970s. Her mouth is cut from ear to ear, and she only goes after children. She approaches them hidden behind a surgical mask; upon removing it, she asks the child if they think she's beautiful. If they say no, she attacks them with scissors. If they say yes, however, she slits their mouths so that they could look like her. So basically... it's a lose-lose situation.

This story comes from West Virginia, telling the sad tale of a woman named Jenny who lived in a shack near the train tracks. One night, she was trying to keep warm by the fire when her skirt caught ablaze. In a frenzy, she started running down the tracks in the direction of the station, hollering for help. Unfortunately, she didn't see the train coming; and, well, you know how this ends.

Legend has it that on the anniversary of her death, she returns and can be seen running down the tracks once again, caught in a ball of fire, screaming for help.

Dolley Madison was a beautiful flower indeed — a social butterfly known for her charm and grace. However, things changed when she passed away in October of 1807. Rumor has it that another First Lady tried to dig up Madison's rose gardens, and she returned from the grave to scare all of the gardeners away. Never touch a woman's garden, people.

That's enough to scar anyone for a lifetime. The roses, on the other hand, are said to still be happily blooming.

Mary Tudor was confirmed to have been a real person — the daughter of the vicious King Henry VIII. King Henry was known for killing his wives whenever he tired of them. As the daughter of his first wife, Tudor saw many gruesome things growing up. Her father made her miserable; but when she later became the Queen of England, she started doing things her way.

Sadly, her way was no better than her father's. She was responsible for such horrible acts as burning people at the stake. Tudor earned herself quite the reputation and soon became known as Bloody Mary. You probably remember this from slumber parties during your youth — friends daring you to go into a dark bathroom and chant her name three times (or, in some versions of the game, 13). Supposedly, Bloody Mary reveals herself to you. I can't confirm this personally; but y'all can give it a shot and let me know.

More like this
Starbucks’ Chocolate Cream Cold Brew Tastes Like This Retro Candy
By Emma Garza
Jennifer Lopez Found The Perfect Ben Affleck Throwback Video For Mother’s Day
By Stephanie Topacio Long
Here’s What Sarah Jessica Parker’s Canned Cosmo *Actually* Tastes Like
By Emma Garza
What Is “Night Luxe?” Breaking Down TikTok’s New Aesthetic
By Courtney Young
Get Even More From Bustle — Sign Up For The Newsletter