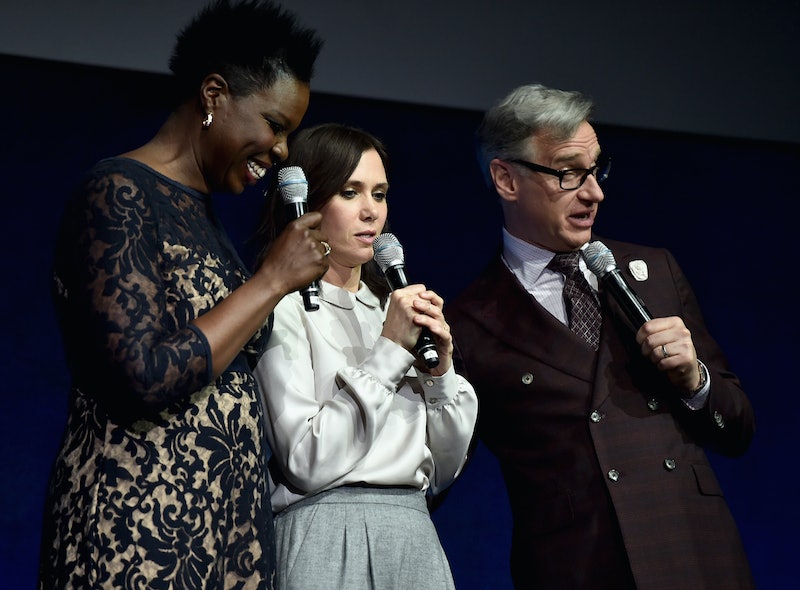 It's a sad day whenever a woman's privacy is invaded via the internet by trolls. Sadly, Ghostbusters star Leslie Jones knows about trolls all too well. Earlier this summer, Jones was attacked online with racist, sexist, and overall hateful memes and messages on her Twitter account, attacks which eventually caused Jones to leave Twitter altogether in July with "a very sad heart." Though Jones has since re-instated her Twitter — and stood up to the haters — that hasn't stopped certain hackers from attacking her in vicious ways. According to The Wrap, on Wednesday Jones' personal website was attacked by hackers, whom posted naked photos of the actress on her site in addition to personal information. Though Jones' site has since been taken offline, director Paul Feig refuses to stay silent about the attacks on this comedian, and it's a reminder that we need people to stand up for those who are attacked online.

Feig worked with Jones when he directed the actress in Ghostbusters , a movie that received plenty of unnecessary flack simply for featuring a female cast. Considering how awful people were in regards to that, it's not surprising that trolls would also attack Jones' personal site. (While both Jones' Twitter attacks and the hack on her site are both hateful, the attacks are not necessarily related in terms of who orchestrated them.) Here's what Feig said when he saw the most recent attack on Jones' page:

Ironically, the people who posted on Jones' Twitter, or were participants in the site hack, likely think that they're defending comedy in some way by dissing Jones, whom they clearly have no respect for as a comedian or human being. That's pretty laughable, considering Jones has already proven herself in the comedy department by scoring gigs on Saturday Night Live, starring in her own comedy special, and earning a place on the new Ghostbusters team. Feig's comment proves that while they can laugh at themselves all they want, these people aren't true comedians — they're bullies and trolls.

Previously, supporters of Jones used the #LoveForLeslieJ tag to show they had the comedian's back, which was when Feig tweeted this caring message:

Jones' Ghostbusters co-stars Melissa McCarthy, Kristen Wiig, and Kate McKinnon have not yet spoken out about the attacks, though many other celebrities have shown their support of Jones via Twitter.

It seems that Feig always has Jones' back, and while that's a great thing, it's just a reminder that we need to support Jones, and anyone in the world like her. No one deserves this level of hatred, nor do they deserve their personal information compromised. Feig and the rest of Jones' supporters remind us that we all need to be better.