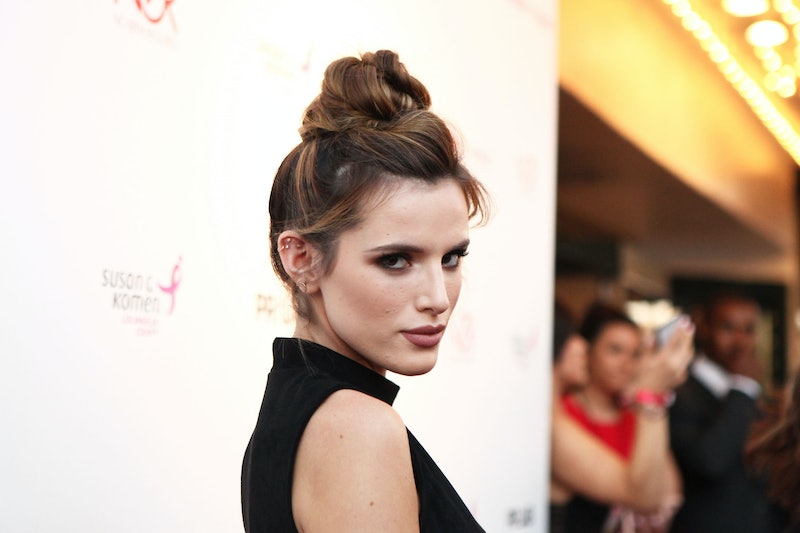 Vampire movies may have taken a back seat at the box office since 50 Shades Of Grey became our sexy movie du jour, but let's not forget that there was a time when the Twilight franchise was breaking box office records and making everyone secretly wish that they could have a Cullen as a boyfriend. Of course, not everyone was as in love with Twilight as Bella was in love with Edward: some people weren't too keen on seeing yet another movie about a woman giving up everything, including her humanity, to be with her boyfriend. Now, Lifetime is doing something a bit different with the vampire romance genre, and people who rolled their eyes at the traditional gender roles in Twilight might love the change. According to Entertainment Weekly, Bella Thorne is producing a vampire movie for Lifetime, one in which a woman gets to play the Edward Cullen character. Color me intrigued.

Thorne, who is best known for her Disney Channel sitcom Shake It Up and her upcoming role on Freeform's new series Famous In Love, has decided to be behind-the-scenes for this movie, titled Drink, Slay, Love — seemingly a play on Eat, Pray, Love — which is based on the 2011 young adult novel of the same name by Sarah Beth Durst. The premise is totally intriguing: Cierra Ramirez of The Fosters will play teenage vampire Pearl, whom, upon discovering she can walk in sunlight, is tasked by her vampire family to search for human blood at her local high school. Unfortunately, the plan goes wrong when Pearl falls head-over-fangs for her classmate Evan (Zach Peladeau), whose blood she should be snacking on.

Personally, I'm loving this role change-up. It's pretty common in the vampire genre for a male vampire to fall for a human woman, only to then have to tip-toe around his own feelings of lust lest he accidentally consume her — like, literally. Sure, Twilight is an easy example, but think True Blood, The Vampire Diaries, heck, even Buffy, The Vampire Slayer — even well-developed female characters can fall into this "purity trap." That extends outside of vampires, too: plenty of movies and TV shows portray women as pure objects of desire whom their male suitors must be careful not to "ruin." (Remember the plot of Cruel Intentions ? Ruining the pure female character is Sebastian and Kathryn's ultimate goal.) Throwing a female vampire into a movie knocks these gender roles out of balance — suddenly it's the woman who is protecting the man from the dangers that come with her love.

I'm super excited to see how Thorne's new movie frames this vampire love story, and it sounds like exactly the kind of role-reversal we need on TV right now.