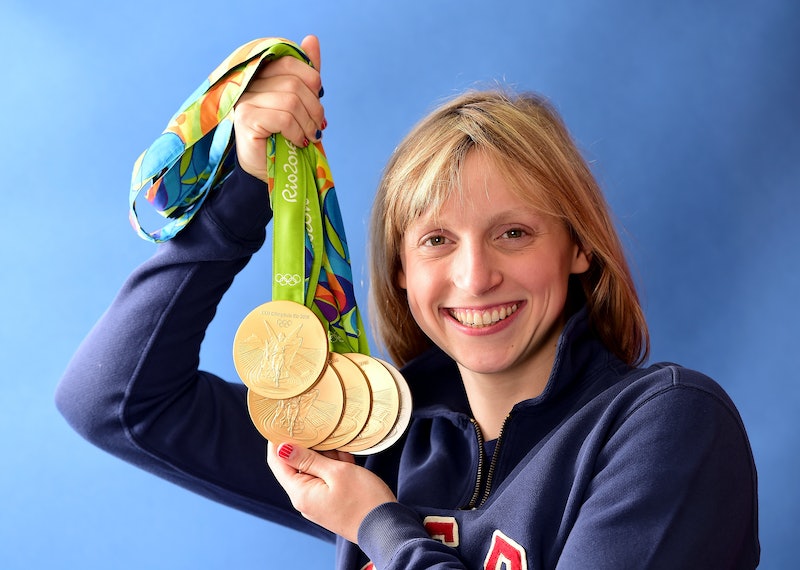 The Video Music Awards may not be the biggest event in pop music every year, but it's certainly the most entertaining. With promises of an epic acceptance speech from Rihanna for the Video Vanguard Award, a massive sweeping of awards by Beyoncé, and the return of Britney Spears to the VMAs stage, this Sunday night's show might somehow manage to top the wild 2015 ceremonies. The VMAs are notable for bringing the biggest stars in the world on stage, and while there are plenty of pop music sensations for the awards show to choose from, there may not be a bigger star on Earth right now than Olympic gold medalist and world record-holding swimmer Katie Ledecky, who is fresh off of a career-making Olympic visit to Rio. Will Katie Ledecky be at the VMAs so that MTV can boast a roster of the biggest stars in America from music and sports?

So far, MTV has not announced any plans to include Ledecky in the VMA ceremonies, though the network did reveal that the Final Five women's gymnastics team and Michael Phelps will be presenters. Past ceremonies have featured Olympic stars too. Team USA's Fierce Five attended the VMAs in 2012 and gold medalist Gabby Douglas even performed onstage during Alicia Key's performance of "Girl On Fire." While it's unlikely that any of this years musicians will feature Ledecky showing off her swimming skills, her star power could still get her into the building as surprise guest. Here are a few of the reasons I think Ledecky should be added to the the 2016 VMAs guest list.

Ledecky Would Make A Great Presenter

The narrative of the 2016 VMAs seems to be all about honoring powerful women. Between paying special attention to Rihanna, Britney Spears, and Beyoncé's feminist masterpiece Lemonade, they are reminding everyone that at this moment in time, pop music is a woman's game. While MTV is showcasing popular female icons in pop culture, it would be nice to see them include someone like Ledecky as a presenter to remind everyone that powerful women don't just come in the form of pop stars.

Ledecky Has A Love Of Music

While Ledecky hasn't spoken in-depth about her musical tastes, she gives her all in the viral video of Team USA's pre-Olympic carpool karaoke session. Belting out "In The Street," the theme song to That 70's Show, it's hard to imagine that Ledecky would turn down the opportunity to belt her heart out at the VMAs while watching the live performances.

Ledecky Can Do Pretty Much Anything She Wants

Who is going to be the person to tell a woman who won four Olympic gold medals in the past month they can't be at the VMAs? While she may not be onstage, if Ledecky wants to see the ceremony, chances are she'll get a spot.

While the VMAs are celebrating amazing forces in pop music, none of them would be able to accomplish what Ledecky has. Beyoncé may have the second-most Moonman award wins behind Madonna, but she's also five medals behind Katie Ledecky. Granted, comparing those is like comparing apples and oranges but there is no better place to celebrate Ledecky, the Beyoncé of swimming, than the same ceremony where fans will be celebrating Beyoncé, who happens to be the Katie Ledecky of music videos.

More like this
What Is Jeanie Buss' Net Worth? The Lakers President Is Uber Rich
By Hugh McIntyre
Kourtney & Travis Crashed His Daughter’s TikTok Live In Their 2nd Wedding Outfits
By Grace Wehniainen
Twitter Is Upset About The 'American Idol' Top 3 Results: "Who TF Is Voting?"
By Jake Viswanath
Selena Gomez Joked About Her Relationship Status In Her ‘SNL’ Monologue
By Grace Wehniainen
Get Even More From Bustle — Sign Up For The Newsletter