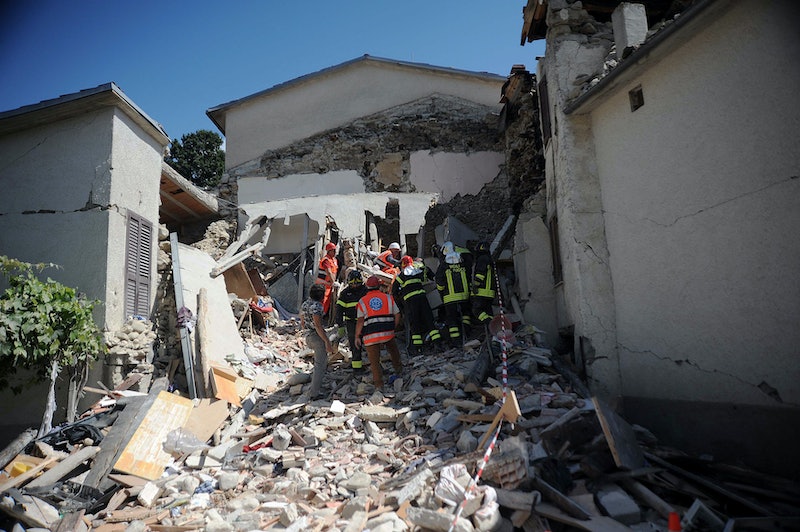 More than 150 people are dead in the aftermath of a terrible earthquake that hit Italy's central Abruzzo region in the early hours of Wednesday morning, and that number might continue to rise as rescue workers continue their search efforts. The death toll of the Italy earthquake is one of the worst the country has seen in recent years, and the process of recovery and reconstruction could be very long.

Media outlets began reporting the death toll at 159 at around 5:45 p.m. ET. According to the BBC, 86 of the deceased lived in the town of Amatrice, which has a population of around 2,000. The two other severely affected towns, Accumoli and Arquata del Tronto, are also conducting searches for those still missing. "We're digging, digging ... hoping to find someone alive," Accumoli Mayor Stefano Petrucci told CNN affiliate RAI. In addition to the 120 dead, nearly 400 people were injured in the quake.

The toll is believed to be high because the region was filled with people taking their last vacations of the summer. According to the Associated Press, the Abruzzo region is a popular area for Romans to own vacation homes, and many were there at the time. Health Minister Beatrice Lorenzin announced that because of this seasonal migration to the region, many of the victims are children.

Almost all of Amatrice was destroyed, according to the town's mayor, Sergio Pirozzi. Amatrice was settled in prehistoric times, and had buildings dating back to the 14th Century, many of which fell to rubble when the 6.2-magnitude quake hit. The town's historic clock tower was left standing, despite fallen buildings on all sides, and the clock is stopped at exactly the time when the earthquake hit.

The death toll has yet to surpass that of the 2009 earthquake which hit the city of L'Aquila, located about 30 miles away from the epicenter of Wednesday's quake. Over 300 people died in the quake, largely due to building collapses, which lead to criticism of Italy's lax construction laws and regulations. According to The Guardian, the town is still rebuilding from the quake seven years later.

The death toll from Wednesday's earthquake is likely to rise in the coming days. The people of Italy will be in mourning for a long time to come, and they're going to need a lot of support and help to get back on their feet.