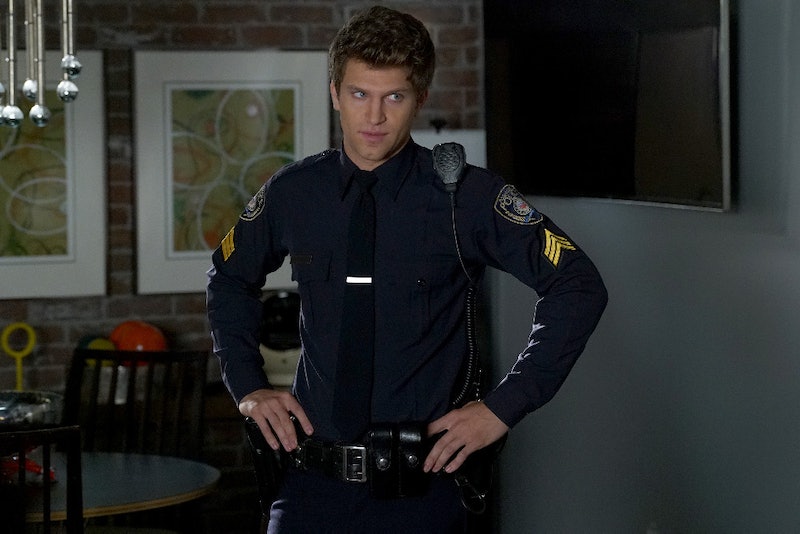 In a town with as much murder as Rosewood, you can imagine that a Pretty Little Liars finale rarely by without at least one death. Unfortunately for one resident of the anything-but-sleepy Pennsylvania town, Freeform's official synopsis suggests death is on the agenda for the Pretty Little Liars Season 7A finale "The DArkest Knight." According to Freeform's synopsis, "the Liars face off with their enemies in a chaotic fight that ends fatally," and though "fatally" could very well mean something different in a world where people tend to come back from the dead as often as they die, it seems like one character really is meeting his or her maker on PLL. One theory? The person who dies in the PLL Season 7A finale will be Toby, and it's a theory guaranteed to make Spoby shippers super sad.

If you thought that Toby was off Pretty Little Liars for good after his heartfelt goodbye with Spencer, so did I. However, the new promo for "The DArknest Knight" is making me wonder if maybe we spoke too soon in regards to Toby leaving Rosewood forever. Check out this scene from the new Pretty Little Liars promo, which definitely features a major Toby moment:

For fans who are thinking that this moment could be a flashback, it's definitely possible — however, Spencer's bangs say a different story. Spencer doesn't have the bangs in her pregnancy scare flashback, which was the beginning of the the end of the Spoby relationship. This moment should be great for Spoby shippers, but there's something about it that makes me feel a bit uneasy. For one thing, Toby just admitted to Spencer that while he did build the house for her, he was in love with Yvonne — that doesn't sound like the kind of thing you'd say to someone if you planned on rekindling the flame. On Spencer's side of things, the show seems to be setting her up with new cop in town Marco — why do that if a Spoby reunion was imminent? Could that kiss be merely giving Spoby shippers what they want, right before they kill off poor Toby?!? Say it ain't so, show.

There's one more major clue from the promo that suggests that Toby could be killed: the person holding the gun. Jenna is holding the gun in the Season 7A finale, and to say that her history with Toby is complicated would be an understatement. Could Jenna shoot Toby as revenge for not succumbing to her advances all those years ago? It's possible, and it's not the only explanation of how Toby could die at Jenna's hands. We hear Spencer say "What did you do?!" to a person after the shot rings out, which could mean that Jenna shoots Toby instead of her intended target — Spencer.

The promo might not necessarily confirm that Toby's a goner, but it's just one in a series of clues. Actor Keegan Allen may have been dropping hints that Toby won't be around in Season 7B when he posted this tweet back in July:

The tweet could be Allen referring to the fact that PLL as we know it is coming to a close, or it could suggest that he won't get another 10 episodes to spend with his co-stars because Toby is dying in the Season 7A finale.

We have just under a week to find out who is really dying in the Season 7A finale, but knowing PLL, they're going to pull out all the stops for what could be their second to last final showdown.