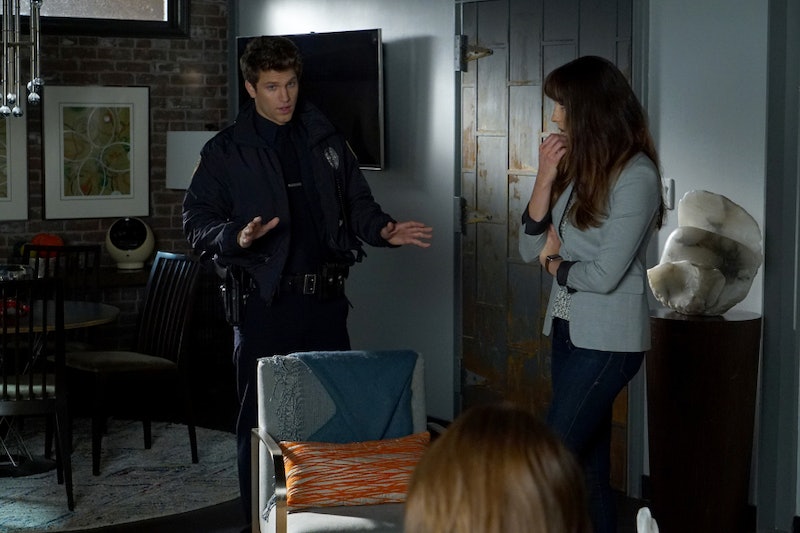 Considering that relationships are mostly based on trust, it's no wonder why our beloved Pretty Little Liars couples have so many problems. They're lives are all full of secrets and considering the Liars just ran over and killed Elliott Rollins with their car, the lies are just going to keep piling up. However, they aren't the only ones hiding things lately. Despite the fact that Toby is now happily engaged to Yvonne, he can't help but come to Spencer's aid when she needs it the most. So when Emily asked him to do some research on Rollins, he couldn't help but oblige, even though he assured Yvonne that he wouldn't help Spencer out with any other secret projects. Could this mean that Spencer and Toby will get back together on Pretty Little Liars ? I'd like to think Team Spoby still has a fighting chance to reunite.

Even now, Toby can't help but put Spencer's needs ahead of Yvonne's. When he was researching stuff about Rollins late at night during last Tuesday's episode, Yvonne came out and asked what he was doing. He lied and said it was just some stuff for work. Call me crazy, but that's not the best way to kick off an engagement, let alone an eventual marriage. He may not be having an affair with Spencer, but the fact that he's making it a priority over being honest with the woman he supposedly wants to spend the rest of his life with, shows that he's not as over Spencer as he may think.

When Toby was with Spencer, they got to a point where they were able to tell each other everything. He was just as immersed in the whole A game as she was, and even though it was stressful, they were still able to complete rely on each other during those trying times. He doesn't seem to have that same kind of connection with Yvonne. He doesn't feel like he can tell her what he's been doing for Spencer, which means either a.) he's still fiercely loyal to his ex-girlfriend or b.) he doesn't trust Yvonne to keep the secret. Either way, it's not a great indicator that this will be a lasting relationship, no matter how much he may want it to work.

Would Toby's life be easier if he were to just go off, marry Yvonne and never look back? Probably. She doesn't seem to constant have stalkers threatening her on a daily basis and I don't think she's even been kidnapped and placed in a dollhouse before. But the heart wants what it wants and given the way Toby still looks at Spencer, I'd say that spark between them is just as prominent as ever. And if he ends up helping them cover up Rollins' death, spending all this extra time together could help to reignite that flame, especially now that her relationship with Caleb has officially lost its momentum. Rollins may be dead, but Team Spoby is alive and well, mark my words.