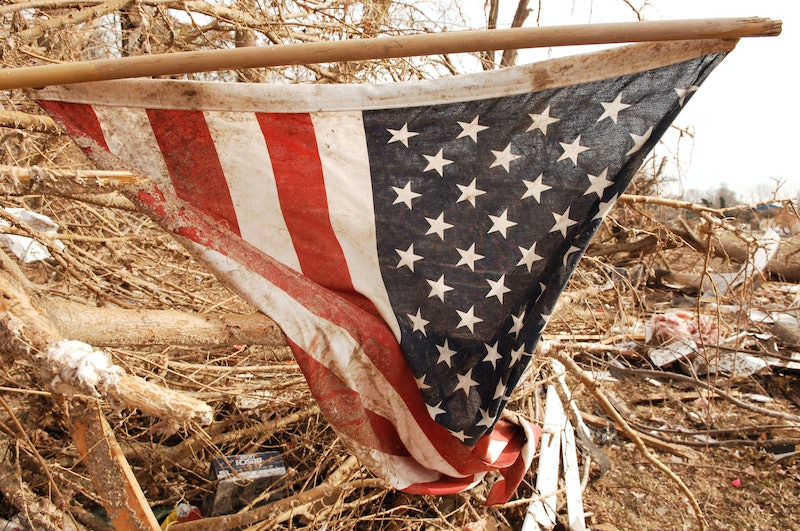 Multiple tornadoes ravaged towns in Indiana and Ohio on Wednesday, prompting officials to declare states of emergency. One area hit particularly hard was Kokomo, Indiana, a small city about 50 miles north of Indianapolis. The damage there may be best explained by a video of a tornado in Kokomo, Indiana, taken at the exact right moment.

The Weather Channel reported on Wednesday evening that in response to the damage in Kokomo, a state of emergency was declared for its county. All in all, dozens of homes and businesses were damaged after an EF3 tornado touched down in the afternoon. The tornado sped through Kokomo at about 30 miles per hour. The National Weather Service called the tornado "large and extremely dangerous."

Along with the property damage, nearly 37,000 power outages were reported in Kokomo, according to CNN. Fortunately, no life-threatening injuries have been reported to the people in the area. Still, residents of the town will certainly have a long process of clean-up ahead of them. As the video from Kokomo shows, entire buildings were instantly flattened when the powerful tornado swept through them. The video was originally obtained by NBC News, and it's unclear who shot the disastrous footage, but the individual at the camera appeared to have a front-row seat for the devastating path of the twister.

Others in the area had similarly intimidating views of the tornadoes. From the photos and videos shared online, it appeared that much of central Indiana was blanketed by grim clouds and darkness long before the sun had set.

The tornadoes that touched down in the Midwest on Wednesday had been largely unexpected, given the time of year. Typically, tornado season occurs much earlier in the spring and summer throughout the region, particularly for Indiana. Still, treacherous weather seems to have been in no short supply this month throughout the U.S. Serious flooding has affected most of Louisiana for more than a week, as more than 40,000 homes have been damaged and 13 people have been killed, according to CNN. The Red Cross called the flooding the worst natural disaster to hit the U.S. since Hurricane Sandy hit the eastern seaboard in 2012.

Back in Indiana, the storm damage called Indiana Gov. Mike Pence away from the campaign trail and back to his gubernatorial duties. Pence had been campaigning as Republican vice presidential nominee in North Carolina until he returned to Indiana on Wednesday. With tornado damage consuming much of his state, Pence spent Wednesday evening working with emergency responders in his state.

Beyond Indiana, tornadoes were also reported in western Ohio on Wednesday. Those tornadoes also caused damage to homes and other structures in the areas where they touched down. As emergency responders and residents have a chance to assess the damage, the true toll of the tornadoes in both Ohio and Indiana will become clearer.

More like this
Michigan’s Governor Is “Going To Fight Like Hell” To Protect Abortion Access
By Andrea Zelinski
The 6 Best Balaclavas To Keep Your Face, Head & Neck Comfortably Warm
By Jenny White
How To See The Lunar Eclipse On May 15-16, 2022
By Kaitlyn Wylde
The Staircase Explores The Murder Trial That Ripped A Family Apart
By Gretchen Smail
Get Even More From Bustle — Sign Up For The Newsletter