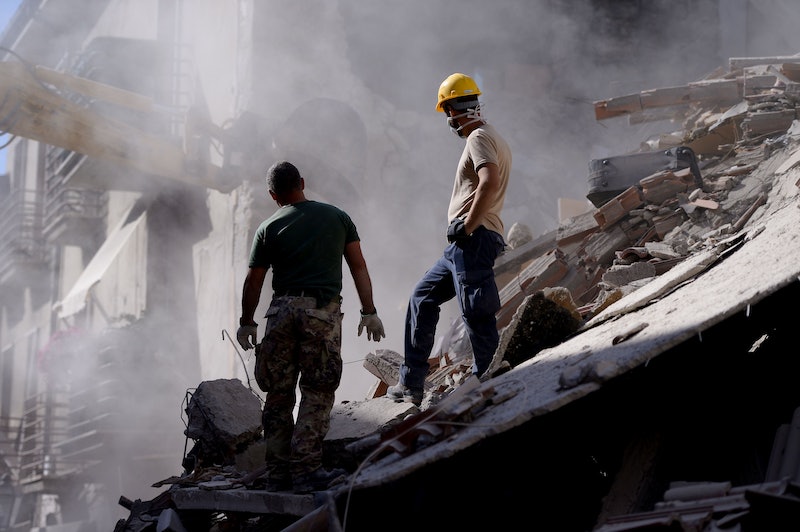 People are searching for answers after an earthquake in Italy left hundreds dead, and naturally people are looking to the Internet for guidance. So, did climate change cause the Italy earthquake? While mainstream science is starting to link climate change with earthquakes, the geophysical feedback mechanisms that are in play in a warming climate aren't well-understood yet.

Back to those studies linking earthquakes to climate change: most of them focus on how earthquakes can add to the greenhouse gas effect feeding into global warming. For example, methane release can occur if the earthquake takes place in an area with a large amount of methane gas pockets, or in areas where fracking is occurring-

Other scientists are taking that a step further. Bill McGuire wrote in 2012 that he believes that climate change has more of an impact on the movement of the Earth's plate tectonic system than most modeling accounts for.

During this extraordinarily dynamic episode, as the immense ice sheets melted and colossal volumes of water were decanted back into the oceans, the pressures acting on the solid Earth also underwent massive change. In response, the crust bounced and bent, rocking our planet with a resurgence in volcanic activity, a proliferation of seismic shocks and burgeoning giant landslides.

McGuire went on to say that the changes occurring right now may have unexpected consequences for the plates which make up the top layers of the Earth's crust and lithosphere.

In an email reported by the CarbonBrief.com staff, McGuire stated, "We are currently on a high-end emissions scenario track and prospects for getting off this any time soon look pretty bleak," before saying that regardless, there will be a pretty dire set of consequences for human beings and our shared environment even without any large scale tectonic events triggered by rapidly disappearing glaciers.

However, experts won't be able to know for certain whether or not climate change had a role in unleashing or exacerbating this particular tragic tectonic event that has claimed at least 247 lives as of press time, at least, not without a significant amount of research. The 6.2 magnitude earthquake devastated Amatrice, a small town tucked into the hills to the northeast of Rome, reducing historic structures to rubble and trapping people, and pets, underneath heavy stones. The town was hosting a pasta festival celebrating the traditional pasta preparation from the area, leaving rescue workers fearful that the body count could continue to grow. As scientists receive more updates on the situation, they will be better able to determine just what caused the earthquake to do such terrible damage.