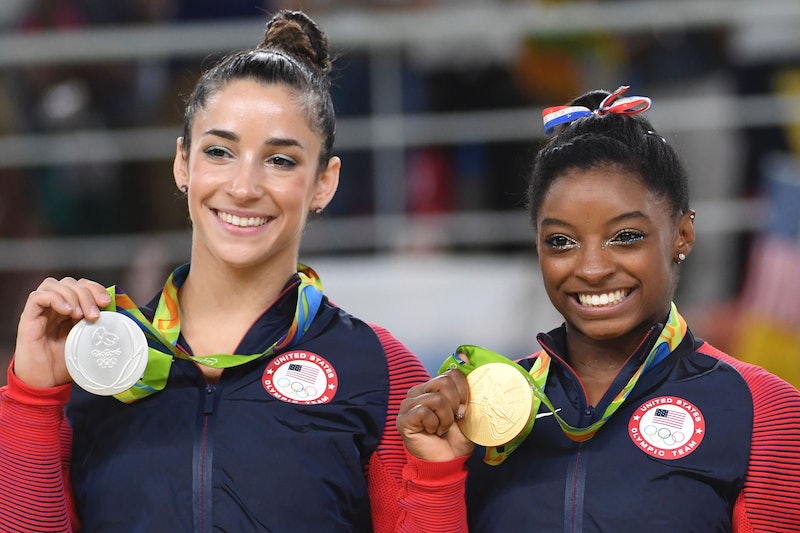 Let this be a lesson to anyone who can't resist body shaming U.S. Olympic gymnasts: If you proceed with your unasked-for criticism, it's best to be prepared for the collective ire of Twitter to come crashing down upon your head. Earlier this week, famed Olympic athlete and possible superhuman Simone Biles posted a photo of teammates Aly Raisman, Madison Kocian, and herself on a beach in Rio, and everyone promptly lost their minds over the sheer amount of muscles revealed by their bathing suits. Although Biles captioned the photo "Rio beach day" on Instagram, an equally informative description would have been "abs on abs on magnificent abs."

After the reminder that gymnasts have more muscle packed on their tiny frames than a room full of Dwayne "The Rock" Johnsons, many fans complimented the athletes on the dedication it takes to have such rock-hard bodies. However, a few enterprising Twitter users decided to distinguish themselves from the pack with a round of "Opinions Nobody Cares To Hear."

"Y'all find this attractive? lmaaoo," tweeted one user along with a screenshot of Biles' original Snapchat. (The tweet has since been deleted, but both BuzzFeed and the Huffington Post UK have posted screenshots.) For reference, here's Biles' Instagram post in all its ab-tacular glory.

But after the trolls began to surface, something pretty terrific happened: People quickly leaped to the gymnasts' defense. Responses ranged from the earnest to the snarkiest of snarky, exemplified by the following tweet from a University of Florida student.

"They're the best gymnasts in the world. I promise you, they didn't get those abs to impress your dusty ass," Crystal McDuffy wrote in a tweet that has been retweeted more than 51,000 times since Tuesday. Later, she told BuzzFeed, "Be it in sports, politics, business and more, women continually seem to be evaluated based upon whether they’re attractive in a man’s eyes." (Bustle has reached out to McDuffy for comment and will update if/when we hear back.)

McDuffy's response was the most concise, but it was just one of many tweets pointing out how supremely unimportant the Final Five's appearances are in comparison to their physical ability — you know, the reason they traveled to Rio in the first place.

And then there's the fact that any one of the U.S. women's gymnastics team could bench press the average American without pause, probably while maintaining a smile and giving yet another adorable interview.

Meanwhile, unless Biles has created a series of fake Twitter accounts to drag herself anonymously (a scenario that seems unlikely, to say the least), the users who insult the Final Five's bodies aren't capable of half the feats the gymnasts perform on a regular basis. After all, they're quite literally the best in the world at what they do.

Unfortunately, each Olympics seems to highlight (in new and exciting ways!) the peculiar way society treats female athletes. No matter how many gold medals they rack up and world records they smash, their accomplishments are undercut by an obsession with factors outside the sport in ways that men simply don't have to deal with. Would a male athlete's accomplishments be attributed to their wife's support, like swimmer Katinka Hosszu and her husband? Of course not, but that's the kind of coverage that research has shown women in sports routinely receive. When female athletes happen to fit arbitrary beauty standards, their bodies are sexualized; when they don't, they're criticized for being "unattractive."

Fortunately, that's where the fans come in. Despite the occasional troll, the Rio Olympics were progressive in many ways, especially when it came to pointing out the problems with the way we discuss female athletes. There are still many ways to improve sexism in sports, but if the response to Biles' Instagram is anything to go by, we're at least getting started. In the meantime, I get the feeling the Final Five have more important things to focus on than what random people on the Internet say about their bodies.

More like this
American Girl Doll Memes Are Going Viral On Instagram & Tiktok
By Emma Carey
How To Take A .5 Selfie On An iPhone
By Emma Carey
YouTuber Runs Into Margaret Sanger’s Grandson While Filming
By Alexis Morillo
Side Character Energy Has Arrived — Here’s What That Means
By Sophie McEvoy
Get Even More From Bustle — Sign Up For The Newsletter