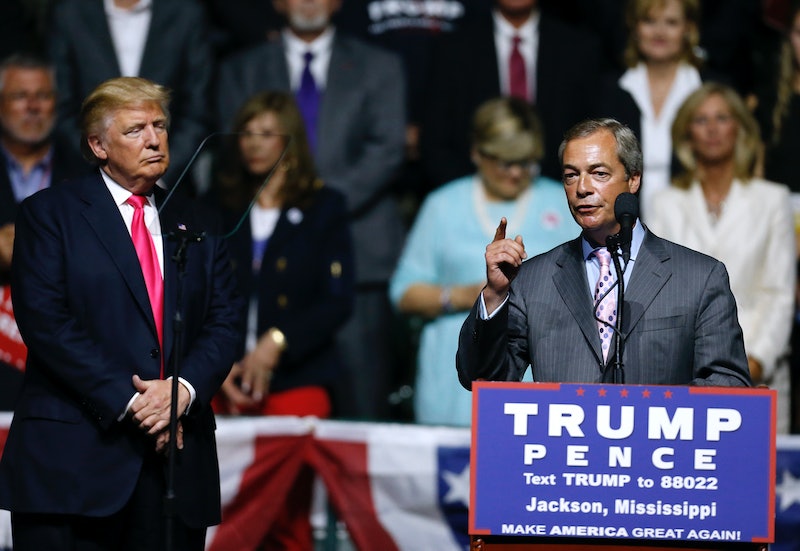 In what turned out to be a jam-packed event, Nigel Farage spoke at a Donald Trump rally in Mississippi on Wednesday night to express his deep disapproval of Hillary Clinton and urge voters to campaign harder for the Republican presidential nominee. Trump introduced Farage to the audience as the man who spearheaded Brexit, in the hopes to inspire morale in the face of the current array of polls showing him losing to Hillary Clinton. Trump made a speech that drew parallels between the British bid to leave the European Union and his own campaign's dedication to "American Independence."

Over the past few weeks, the pressure has increased for Trump to rally supporters together as Clinton has run away with the lead and Trump's significantly lower rating among nonwhite voters has come to the forefront as a campaign issue. However, his suddenly pronounced effort to please voters across demographic lines has proved itself as a difficult balancing act between the contradicting interests of his white NRA-loving supporters and the minority voters he hopes to court.

Trump's scattered attempts at pleasing all the voter demographics was made apparent in the stacked lineup at his rally in Jacksonville, Mississippi on Wednesday, which included, along with Farage, the pro-Trump black pastor Mark Burns and former New York Mayor Rudy Giuliani.

The night relied heavily on Farage's speech indicting Clinton, in which he at one point said, "I wouldn't vote for Clinton if you paid me to," before encouraging Trump-lovers to strengthen their campaign so they could achieve the same "independence" as Brexit voters. But according to Matthew Teague's report for The Guardian, when he took an informal survey before the rally, it "showed that eight in 10 people had never heard of Farage or Brexit."

Besides the fact that Trump attempted to excite voters through the appearance of a British political leader they were barely familiar with, he also attempted to cater to minority voters by having Burns make an impassioned speech in which he cited Clinton's pro-choice stance as an anti-black policy, equating it with black genocide. While this could have possibly courted conservative black voters in another context, the rally on Wednesday was nearly all-white — which makes Trump's lineup of the New York politician Giuliani, British politician Farage, and black preacher Burns feel a bit discombobulated.

The incentive for Trump to appeal to wider demographics will only intensify in the next two months leading up to the election, which means his efforts will either find a more focused footing or become increasingly scattered. Maybe Trump should listen to the old adage: Attempting to please everyone generally means you end up pleasing no one. And the polls are proving just that in his campaign.