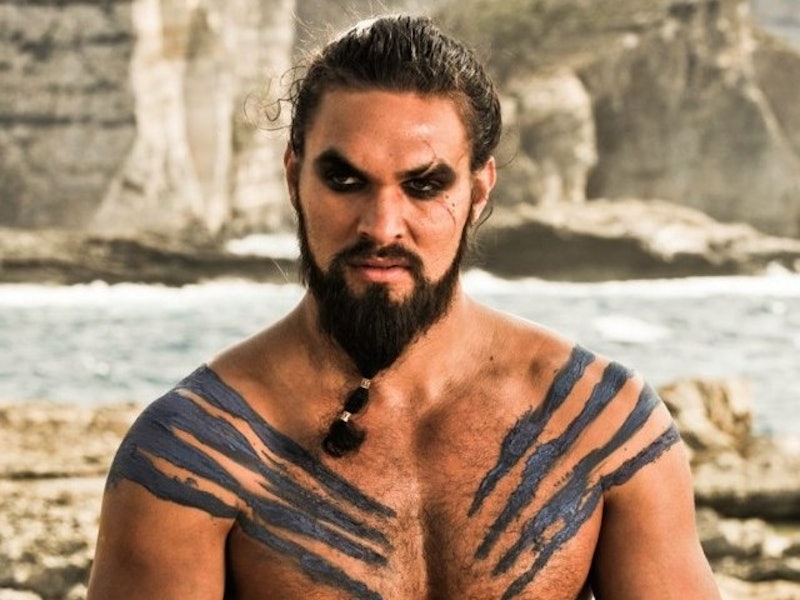 With one Instagram photo, Jason Momoa managed to excite a whole lot of fans into thinking there's a chance Khal Drogo may be returning to Game of Thrones. At least, if you take this specific photo, which shows Momoa drinking Guinness in Ireland with Game Of Thrones creators Dan Weiss and David Benioff, as a sign. Khal Drogo died a while ago, so it's unlikely he's simply returning as himself. But perhaps he'll return someone more epic? Some are already wondering if Khal Drogo is returning as Azor Ahai. And, honestly, that would be a much more interesting twist than finding out Azor Ahai is actually Jon Snow.

The identity of the Prince Who Was Promised has yet to be revealed — despite some believing that it's either Jon Snow or Daenerys Targaryen. But a Reddit user named MrMasochist believes Drogo is the one who will be resurrected to lead the armies of men against the White Walkers. Momoa's teased Khal Drogo's return to Game Of Thrones before, but there are definitely clues that could confirm the Khal Drogo is Azor Ahai theory stemming from not only Melisandre's prophecy of Azor Ahai, but also from what Mirri Maz Duur tells Daenerys back in Season 1.

Back then it seemed like she was taunting the Khaleesi by saying Khal Drogo was never coming back, but, reading it back now, it hints at Khal Drogo's return, which Mirri Maz says will happen "when mountains blow in the wind like leaves, when the sun rises in the West and sets in the East, when the sea goes dry and mountains blow in the wind like leaves, when your womb quickens and you bear a living child." In George R.R. Martin's books, the mountains could be the great pyramids of Mereen falling, but, on the show, it could also be the Mountain, Cersei's zombie henchman, falling. Maybe even at the hands of his brother, the Hound. (Yes, I'm still rooting for a Cleganebowl.)

But, the reason I'd like to see Khal Drogo come back as Azor Ahai rather than Jon Snow is because it's an unexpected choice. For years, it's been hinted at that the bastard son of Ned Stark is the chosen one to fulfill the prophecy of the mythical warrior. That he will be the one who will forge the Lightbringer sword and save the Seven Kingdoms from White Walkers. It feels like something fans have been waiting for, and, at this point, the big reveal needs to pay off. It needs to feel like it was worth the wait, seven seasons worth of waiting. Being that Jon has already been resurrected, there's something less satisfying about him being Azor Ahai at this point in the show. Even if there are signs that point to Jon Snow still being Azor Ahai, it feels like it would be a cop out, the easy way to explain this huge mystery fans have been wrapping their head around. If it's Jon Snow, it feels like, why did I have to wait so long to realize this?

Khal Drogo may have died in the first season, and only appeared in the next season as one of Daenerys' visions, but his return seems fulfilling. I mean, there's already a prophecy that he will be resurrected, which already seems very Azor Ahai-esque. Not just because he's a fan favorite who was gone too soon, but because it plays into the idea that on Game Of Thrones, anything can happen. It's something GoT has shown us since the first season's penultimate episode where Ned Stark was decapitated. It threw fans off — how could the hero be dead? — but made it clear that you must keep on your toes when you're watching this show.

The realization that Khal Drogo is Azor Ahai reborn works because it isn't so farfetched that it's unbelievable — yet it's still a satisfying left turn that can be explained by re-thinking his past. Mirri Maz Duur's words about Khal Drogo's return were meant to be taken seriously, because, once you delve in further to them, they don't actually differ that much from Melisandre's prophecy about Azor Ahai. Azor Ahai is set to be the person who wakes dragons out of stone; Khal Drogo's death managed to help the hatching of the Khaleesi's dragon eggs. Thinking of it this way, Drogo's death was what led to Khaleesi becoming the true Mother of Dragons — a turning point in the show.

Drogo has clearly been a powerful force in this world, but it's more exciting to think that perhaps his true power has yet to even be seen. Ned Stark's death may have sparked the race for the Iron Throne, but Drogo's death could be the answer to finishing it. All along, he, not Jon Snow, was the true warrior the world's been waiting for. And isn't there something just so very exciting about that notion? That after all these years, Game Of Thrones still has some tricks up its sleeves?