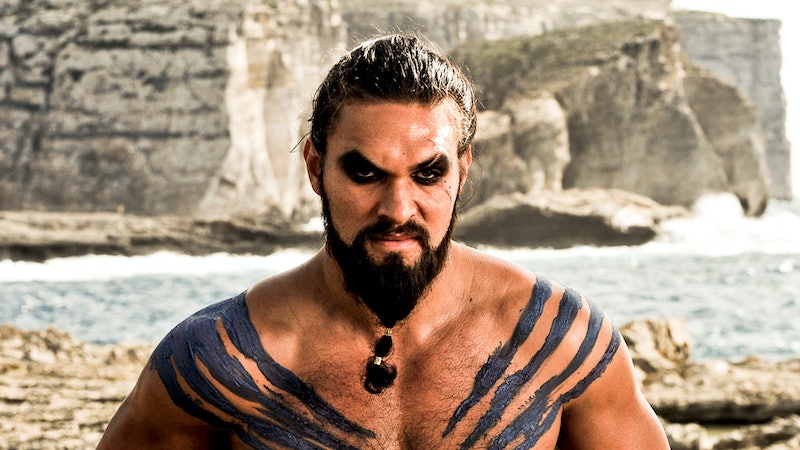 Death has always been ingrained into the fabric of HBO's Game Of Thrones from its very first episode. Ned Stark's beheading is the go-to example for the show's ruthlessness, but Season 1 had plenty of other shocking deaths as well, including Robert Baratheon, Viserys Targaryen, and fan-favorite character Khal Drogo. (Not to mention poor innocent direwolf Lady.) But death started to seem a lot less certain in Season 6, with Jon Snow resurrected by Melisandre and Sandor Clegane seemingly returned from the dead. Does that mean that our favorite Dothraki horse lord could also come back? Could Khal Drogo be Azor Ahai?

The identity of the Prince That Was Promised is something that GoT fans have speculated about since Melisandre first introduced us to the prophecy in Season 2. Since the long-awaited confirmation of R+L=J, it has become probably the single most pressing mystery left to be solved on the show. Most theories revolve around Azor Ahai being either Jon Snow or Daenerys Targaryen — or both, hence the "song of ice and fire" — but Reddit user MrMasochist has a different idea: that Khal Drogo will be resurrected and be the one to lead the armies of men against the White Walkers.

There is actually a surprising amount of evidence supporting this bizarre theory; not only from Melisandre's prophecy of Azor Ahai, but also from the prophecy that Mirri Maz Duur delivered to Daenerys back in Season 1 about Drogo's return. Let's start there:

1. "When The Sun Rises In The West And Sets In The East…"

Although he was cut from the show, the books feature a storyline where Dornish prince Quentyn Martell travels to Meereen to woo and marry Daenerys as part of a pact against the Lannisters. It doesn't work out well for him — he arrives the same day Dany is set to marry Hizdahr zo Loraq, and he ends up getting roasted by Viserion and Rhaegal in a foolhardy attempt to prove himself to the Mother of Dragons. In other words, the "sun" (the sigil of House Martell is a sun) was born in Westeros and died in Essos. Check!

After Daenerys is carried away from Meereen by Drogon and deposited in the Dothraki great grass sea, she notes that it appears the area has been hit by a terrible drought; all the plant life has dried up and withered in the hot summer sun. Check!

After Quentyn's ill-fated attempt to tame the dragons, Viserion and Rhaegal escape their tomb and wreak havoc upon Meereen, destroying several of the Great Pyramids in the process, as the smoke from their "smoldering ruins" blows throughout the city. Check!

(Other possibilities about this particular point include the impending collapse of the Wall or the death of Gregory "The Mountain" Clegane.)

While Dany wanders lost through the Dothraki sea, she awakes one morning to find that her thighs are "slick with blood." For someone who was never supposed to be able to bear children after Mirri Maz Duur's blood magic, the fact that she is menstruating again is as big a sign as any that the witch's prophecy is coming true. Check!

This is the only part of the prophecy that hasn't come true yet. But when Dany set sail for Westeros, she left her paramour Daario Naharis behind, announcing her intention to marry a Westerosi suitor. Most people believe her she will marry her nephew, Jon Snow; if the two bore a child together, it would be the literal embodiment of "ice and fire."

Of course, how ironic would it be if Dany marrying and having a baby with another man is the final condition that's needed to bring Khal Drogo back to life? Just as Dany has finally moved on is the exact moment when her dead husband will return. Sounds like precisely the kind of painful twist that George R.R. Martin would love.

It's notable that the Red Priestess specified that the Prince would arrive "after" a long summer. As has been mentioned several times throughout the show, the summer our characters have been experiencing is one of the longest on record. But it didn't end until the Season 6 finale — appropriately titled "The Winds Of Winter" — when the Citadel sent out the white ravens that officially signify the change of season. That means that Jon was resurrected during the summer. On the other hand, if Khal Drogo returns, it will be during the winter, after that summer has ended.

9. "…And The Cold Breath Of Darkness Falls Heavy On The World…"

Obviously this is referencing the impending invasion of Westeros by the Night King and his army of wights — which is certainly about to fall heavy upon the Seven Kingdoms any minute now.

It remains to be see how Khal Drogo will be resurrected, so I don't know whether smoke and salt will be nearby when it happens. But if you consider his death to technically be the start of his rebirth — like a phoenix — then there was certainly smoke (from the fire) and salt (from her tears) present when Dany laid him to rest on that pyre.

Yep, he already did this — and not metaphorically, either. The blood magic of Khal Drogo's sacrifice is what allowed Drogo, Viserion, and Rhaegal to hatch from their petrified eggs.

12. "…And He Shall Draw From The Fire A Burning Sword, Lightbringer."

One of the most common things we hear about the Prince That Was Promised is that he will be carrying a mythical flaming weapon that will be able to kill the White Walkers. I'm not sure where Drogo will procure such a sword, but that's a bridge that can be crossed once he's resurrected. Many people think Jon Snow's Valyrian steel blade is Lightbringer — it can kill White Walkers, after all — but there's one key part of Lightbringer's backstory that's missing from Longclaw. Legend has it that the forging of Lightbringer required Azor Ahai to plunge it into the heart of his lover, Nissa Nissa, sacrificing her so he could defeat the armies of darkness.

Many people assume that Daenerys is Azor Ahai; but what if she's really Nissa Nissa? If Khal Drogo is the Prince That Was Promised, then he may need to kill his own wife in order to save the world. Now doesn't that sound like an ending George R.R. Martin would love?