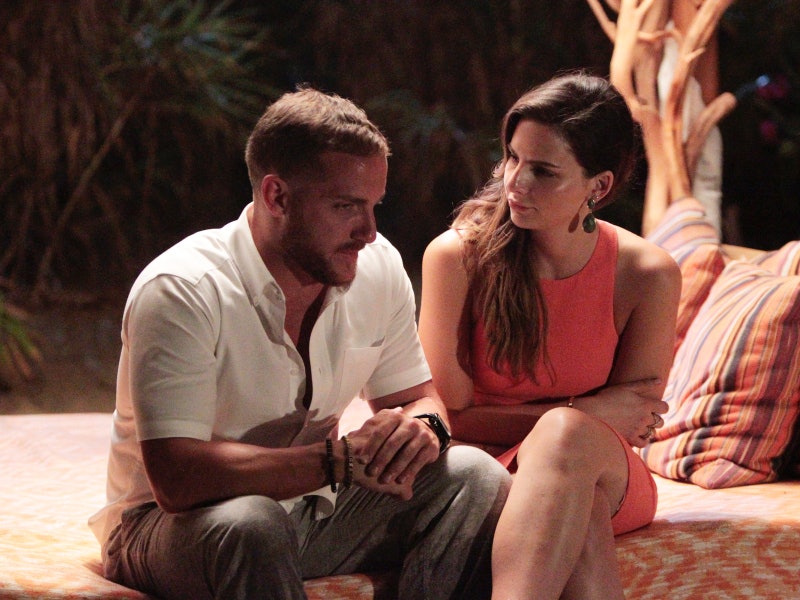 I was as stunned as the rest of Bachelor Nation when Vinny voluntarily left Paradise during the Aug. 23 episode after Izzy's confession that she was interested in Brett. But what really shocked me was the way that Izzy was treated on Bachelor in Paradise and After Paradise following Vinny's departure. While I felt bad for Vinny since he was clearly heartbroken, I thought his response on the dating reality show was pretty extreme. Yeah, he has every right to be upset that someone else tempted Izzy, but when you're on a show where new people are literally brought in every week to shake up the couples, you can't really be surprised, can you? Considering Izzy told Vinny the day she felt an attraction to Brett, I thought she should have been commended for her honesty. Instead, contestants like Evan and the panel on After Paradise seemed unreasonably disappointed in Izzy's actions and I'm here to say I'm proud of Izzy on Bachelor in Paradise.

I know that the advertised point of being on Bachelor in Paradise is to find true love — and Izzy echoed that on After Paradise. However, I beg to differ. Each episode at least partially revolves around new singles being unleashed into Paradise whenever a couple is getting particularly cozy. That's to create drama and to strain — or, if you're an optimist, reinforce — the relationships. Izzy and Vinny were in Paradise together from the very first episode and they had an initial connection that wasn't interrupted — that is, until Brett came. It was great that both Vinny and Izzy found someone they wanted to be with from the get-go, but why does Izzy (or Vinny, for that matter) have to feel trapped in that relationship? If you could potentially like someone else, isn't letting the other person you are seeing know as soon as possible the right thing to do? That way, he or she knows where your commitment level stands. That's exactly what Izzy did and it seems mature and reasonable to me, especially considering the ridiculousness that is Bachelor in Paradise.

Now, I don't know what Vinny and Izzy said to each other off camera, but dating for a couple of weeks in Paradise does not necessarily mean you are in a completely monogamous relationship. And while I'm sure Vinny would have loved for Izzy to only be into him throughout the run of the series, that wasn't the case and she handled it pretty well by telling Vinny the very same day that she saw Brett. It wouldn't have been fair to either member of the couple formerly known as Vizzy for Izzy to keep those feelings to herself since Paradise is all about seeing who you really connect to.

If you want the flexibility to date a lot of people to see who you are interested in, Paradise is the place to do it. All of the Bachelor show's force the participants to be OK with one person dating multiple people. Fascinatingly, Paradise is actually the most healthy way to be polyamorous within Bachelor Nation since each individual has the power to choose who they want to date, unlike The Bachelor and The Bachelorette. Izzy was open with Vinny that she was attracted to someone else and instead of allowing her to pursue that and taking the opportunity to see if there was anyone else he could be attracted to, Vinny just left.

Of course, Vinny should do whatever he is comfortable with and his feelings for Izzy must have been significant for him to leave. I'm not a monster, so I'm not completely insensitive to what Vinny was going through, but I don't think it was fair — from what was shown on TV — to say that Izzy blindsided Vinny. She did the exact opposite. Yes, she spoke with Brett before telling Vinny of her potential interest, but isn't she allowed to see if the attraction is more than physical before making that admission? His response to her truthfulness was immature (like when he let her feel like a terrible person) and it was over-the-top to just walk out of Paradise. (Not to mention, can we talk about how weird Brett must be feeling right now? Eeeee.)

I'm not saying that Izzy was infallible in her handling of the situation, but the only thing that I saw that Izzy might possibly need to feel bad about is if she knew there was no future with Vinny before Brett arrived. In her commentary on Bachelor in Paradise and After Paradise, she said there were issues in her romance with Vinny even before seeing Brett. As long as she wasn't actively stringing along Vinny to ensure she got a rose on Paradise though, I'm still Team Izzy. Just because she was intrigued by Brett doesn't mean she still can't care about Vinny and the sad truth is sometimes someone else helps you realize your true feelings — especially when you're on a truly absurd reality dating show.

While I was bummed to the see the destruction of one of the best couples on Bachelor in Paradise Season 3, Izzy made the right call to be honest with Vinny and shouldn't be criticized for it. Their relationship would have been superficial if she wasn't up front with Vinny and I look forward to watching how Izzy does in Paradise without being a part of a couple. Although I severely doubt she'll be leaving Bachelor in Paradise with Brett, I'm happy that she is doing what's best for her — even if that means breaking a heart or two along the way.