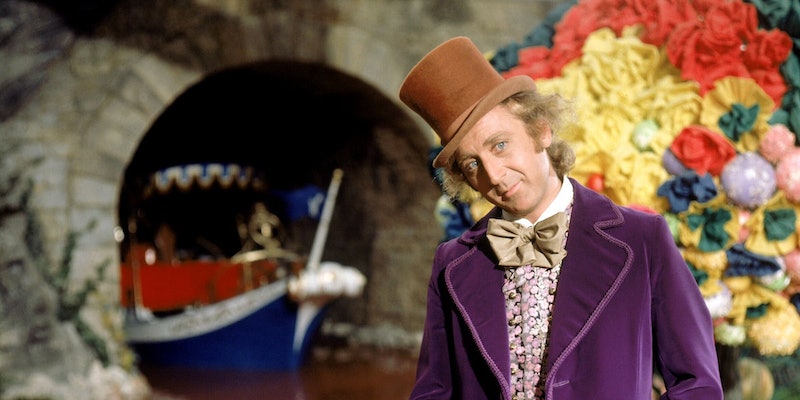 Roald Dahl was the author of 19 beloved novels and multiple short story collections, but his legacy is so much larger even than that. There are so many fantastic Roald Dahl movie adaptations that we should be giving him thanks for — especially today on his 100th birthday. Not only did Roald Dahl give us the wonderful children's book Charlie and the Chocolate Factory, he also inspired Gene Wilder's unforgettable performance as Willy Wonka. Without Roald Dahl we never would have read about Matilda Wormwood — but we also never would have seen Mara Wilson bring her gloriously to life. Yeah, the man deserves a lot of our gratitude.

There have been twelve film adaptations of Roald Dahl's work, and I'm just going to put it out there and say that they're all brilliant. According to the IMDb ratings, even the least popular film is a 6.5 out of 10 — which is the same as super-popular films like Pitch Perfect 2 and the original Footloose. Basically, everything Roald Dahl touches turns to gold.

But which is the best of the best — and which films just aren't quite up to scratch? Even amongst such a great selection, there's got to be a pecking order, and I've taken it upon myself to figure it out. So, by the power vested in me by the gods of the cinema, I now declare this the official ranking of Roald Dahl movies — from worst to best.

OK, so I haven't actually seen this one — but as I've seriously struggled to find anybody who has, I'm going to assume it's not the cream of the crop. It didn't do particularly well with critics either, so while it does look pretty funny, I'm going to have to let it linger at the bottom of this list.

Sorry not sorry Johnny Depp, your strange and creepy Willy Wonka could never hold a torch to Gene Wilder's charismatic and terrifying portrayal. Freddie Highmore was adorable as Charlie Bucket, though.

This year's live action remake of The BFG was pretty great. It was exciting, scary, and magical... but sometimes, there's just no improving on a classic.

The 1989 cartoon version of The BFG may not have been as visually stunning as the recent remake, but its charm more than made up for its clunky graphics. This film was utterly weird and very silly — just like Roald Dahl would have wanted.

This made-for-TV movie has pretty much slipped under the radar for the last 27 years, but considering it stars Jeremy and Sam Irons and Robbie Coltrane, I'm surprised it hasn't developed more of a following.

Who can forget the time Roald Dahl got the Wes Anderson treatment? This might not be my favorite Roald Dahl adaptation of all time — but it's certainly the prettiest (and the most symmetrical).

The Witches haunted me when I watched it as a child, and when I rewatched it for the purposes of this article, I found it was every bit as terrifying as I remembered. (Anjelica Huston peeling off her face pretty much scarred me for life.) But as scary as this film is, it's got nothing on Roald Dahl's sinister novel — in which many of the main characters meet a much grizzlier end.

Judi Dench and Dustin Hoffman make the most adorable couple in this BBC Christmas special. Warning: you may cry tears of happiness.

I can't even think about this film without getting shivers down my spine. From the moment the giant rhinoceros emerges from the cloud in the opening scene, this film is the creepiest thing you have ever seen — even in the happy moments. And isn't that just classic Roald Dahl?!

I know, putting this film so high on the list is a little controversial: you probably haven't seen it — and even if you have, it's unlikely you knew that the story, in which a German doctor tries to obtain information from an American officer by tricking him into thinking it's 1950 and the war is over, was based on a Roald Dahl short story called "Beware of the Dog." But you know what? This World War II suspense film is really very good.

This childhood classic is pure magic. I love the soundtrack; I love the special effects; I adore Mara Wilson's adorable little face. This was the film that made so many lonely little bookworms across the world feel special and powerful. (Um, it's also the film that had us wasting hours trying and failing to make cereal move across a table.)

Was there any doubt this film was going to end up at top of the list? Gene Wilder's Willy Wonka is iconic; the chocolate factory manages to simultaneously fulfill our wildest dreams and our worst nightmares; and the songs have been stuck in our heads since before we were born. As movies go, you don't get much better than this.

More like this
The 20 Best Audiobooks To Fall Asleep To
By Aoife Hanna and K.W. Colyard
Shocked Fans & Former Co-Stars React To Ray Liotta’s Death At 67
By Grace Wehniainen
'Stranger Things' Star Joe Keery Is Dating An "Indie Scream Queen"
By S. Atkinson and Grace Wehniainen
Stop Everything – A Take That Film Is In The Works
By Sabah Hussain
Get Even More From Bustle — Sign Up For The Newsletter