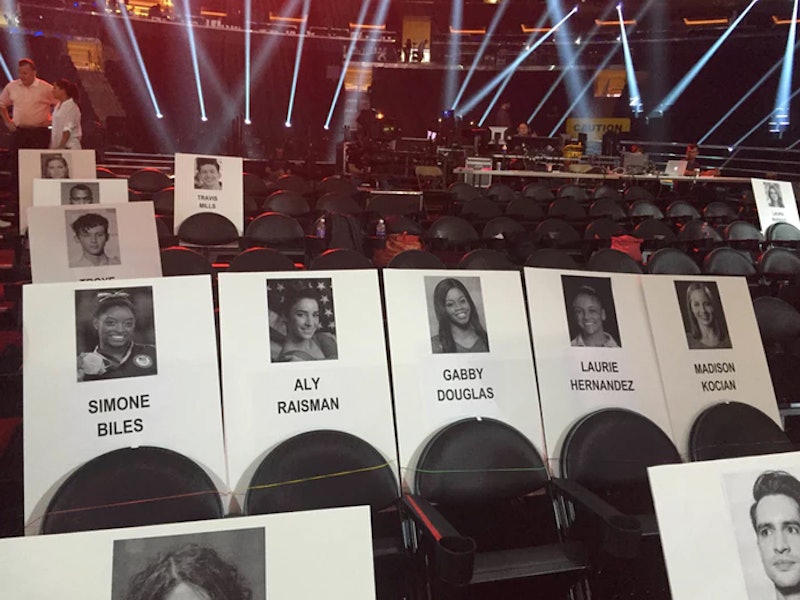 I typically prepare for the VMAs by putting on my jammies, getting a bunch of my pals together, parking my behind on the comfiest corner of my sectional sofa, and double fisting (several) slices of pizza and a glass of cabernet sauvignon. Not this year, though. No, 2016 is the year I took the VMAs preparations a bit more seriously by going to the very venue where the award show takes place: a little place called Madison Square Garden. While there, I was able to sneak a peek of all of the behind-the-scenes VMAs happenings and chat with one of the executive producers of the show mere days before it premieres. Which is great news for those of you who are keeping up the MTV, PJs, and chill tradition in my stead.

If you've ever wondered what it's like to be in the room where it happens (*winks at fellow Hamilton fans*), I've got you covered. I'm about to take you into the magical world of the Video Music Awards to give you an inside look on what it'll be like for the fans, celebs, presenters, performers, and famed athletes alike who will be in attendance come Sunday, Aug. 28.

But enough preamble. Let's take the tour, shall we?

Though this is typically seen as the hard earned parting gift after a wild night, I thought I'd switch it up and highlight the goods first, because we're all adults here and we can have dessert before dinner if we want to. Also because it happened to be the first VMAs ~inside look~ I was given upon arriving, so why not?

What do you see when you walk into the VMAs auditorium? Nothing — at first. It takes your eyes a second or two to adjust to the beaming lights coming at you from every direction, but once you've regained your eyesight. It is definitely a sight worth seeing. Or risking your ability to see. Whatever.

This is where the magic happens, guys. In reality, the stage is much smaller than you'd think and the Jumbotron is a lot more, well, jumbo. The lack of space on the stage gave me a newfound appreciation for these artists and the wild, stunt-like performances they put on.

That's right, I know what you came for. You can't fool me. You want to know who is sitting next to one another and who is sitting as far away from each other as humanly possible. Although it was hinted at that this seating chart isn't final and that there will be additional stars sitting their regal behinds in these chairs, I did learn a whole bunch from seeing who's already confirmed to attend and where they're instructed to kick back.

But the thing is, even though you can tell a celebrity something, doesn't necessarily mean that they'll listen. Senior Vice President, MTV Programming, Events, and Live Production, Garrett English, let me in on a few seating secrets, even though he says that he "tries to stay as far away from that as humanly possible."

"The process that goes on there is nutty," he says of the process of making the seating charts. "Whether it's the nuances of politics between artists... to the complexities that our director has to deal with there, to our team who actually administers how everybody gets to those seats, is so crazy... But suffice it to say, at 9 o'clock, all the best planning in the world, out the window."

"So people will just sit where they want to?" I ask. English replies, "Generally speaking, top of show, people sit where they're supposed to. But then, by the time the first performance is over and you're in the first commercial break, then we're just trying to find everybody. Everybody starts moving."

You heard it here, first. Keep your eyes peeled for who's sitting next to who by the end of the first commercial break if you want to know who's hanging with who voluntarily.

Finally, What Should You Look Forward To?

English is pumped about the 2016 VMAs partially because this year there will be a "variety" of hosts, rather than singular host. But more so than that, the producer talks up this year's Video Vanguard Award recipient, Rihanna, and her sure-to-be classic performance. "[It] has become such a big moment within the show and has evolved into this little Super Bowl half-time show in the middle of the show," he says of the Video Vanguard performance. "And I think what Rihanna's interpretation of that, going into Sunday night and all of our conversations, is going to be huge. So I think [I'm] really excited about the spin she's putting on the Video Vanguard."

Have you seen a Rihanna performance before? Well then, you know that this news can only be summed up by this sort of reaction:

Thanks for manning the couch for me, guys. Being on the inside, dressed up, and pizza-less was quite a venture, but one I'm glad to have made. I can say, from firsthand behind-the-scenes experience, that the 2016 VMAs are going to be wildly entertaining in the way that only the VMAs know how. Consider this insider-for-a-day dazzled.

More like this
Twitter Is Upset About The 'American Idol' Top 3 Results: "Who TF Is Voting?"
By Jake Viswanath
Kourtney & Travis Crashed His Daughter’s TikTok Live In Their 2nd Wedding Outfits
By Grace Wehniainen
Stormi Just Walked A Red Carpet With Mommy Kylie Jenner & Daddy Travis Scott
By Hugh McIntyre
Sam Ryder Is Ignoring The Eurovision Hype, Too
By El Hunt
Get Even More From Bustle — Sign Up For The Newsletter