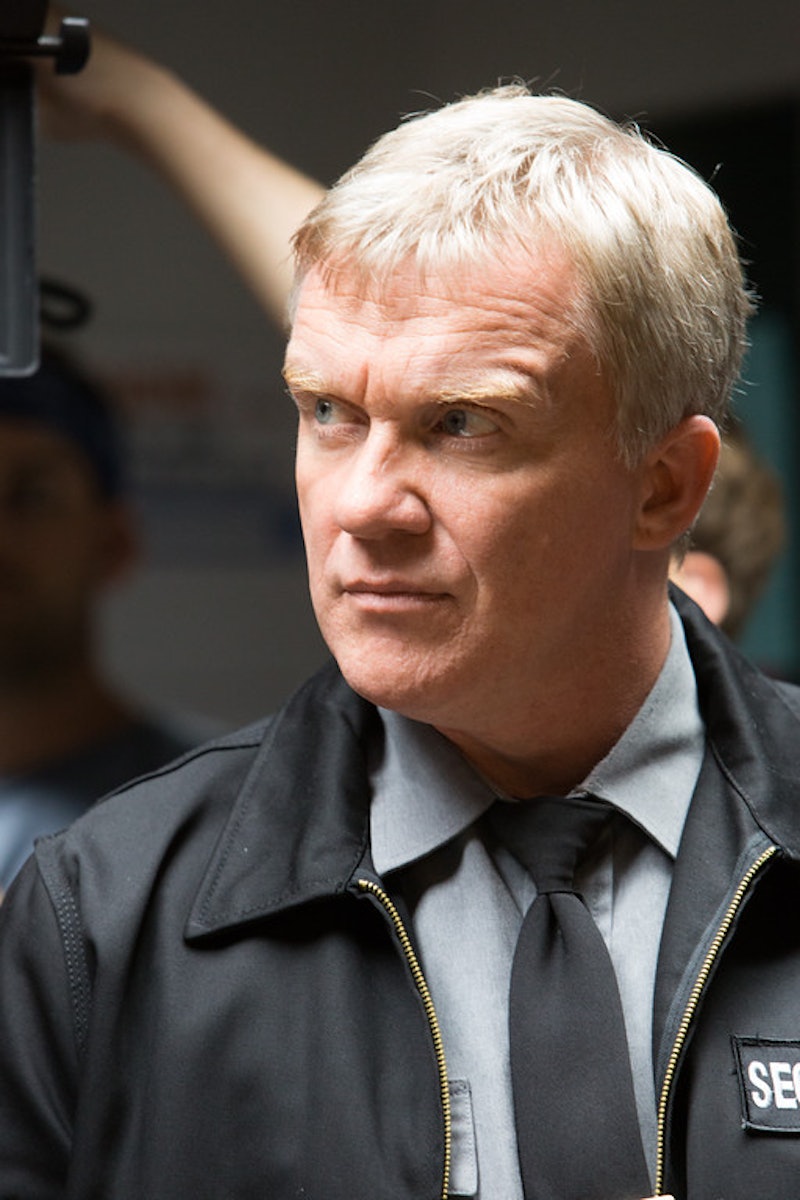 It's been awhile since Anthony Michael Hall was in high school, but that's where he finds himself in the teen thriller Natural Selection. The former Brat Packer, known for his nerdy turns in classic John Hughes films like The Breakfast Club and Sixteen Candles, plays Ray Stevenson, a policeman turned high school security guard, who is looking for forgiveness after a recent tragedy shakes his confidence. Like so many others in the movie, Stevenson is trying to deal with the aftermath of gun violence. Speaking via phone about his new film, directed by Chad L. Scheifele, Hall says that more movies need to start tackling serious topics like gun violence, bullying, mental illness, and the transition into adulthood in a way that doesn't belittle the younger generation's concerns with these issues. "I think it’s important to give younger audiences more intelligent stuff than they wouldn’t have been served up years ago by Hollywood," he says.

This is not actually the first time Hall has played a character in a teen movie dealing with guns. In 1985's The Breakfast Club, Hall's character Brian Johnson gets detention for bringing a flare gun to school. In tears, Brian talks about the pressures of being the high-achieving smart kid, and how he planned to use the gun to take his own life before it unexpectedly went off in his locker. Back then, the idea of bringing a gun to school seemed almost silly; the others in detention actually laugh at Brian for thinking he could end his life with a flare gun of all things. In Natural Selection, the guns, and the violence they cause, is real and certainly no laughing matter. It's a seriously updated take on what The Breakfast Club addressed over 30 years ago.

In Hall's opinion, millennials are "so much more tolerant, so much more loving, compassionate and smarter in so many ways" that it's up to this generation to teach those older than them to learn to accept those that are different and think differently than them. "We all have to look at ourselves and make sure we’re positively contributing to this world," Hall says. "Because there’s enough darkness."

The conversation surrounding gun control has become increasingly timely since the movie finished shooting over three years ago. Hall says that the challenge of talking about guns in America, though, is that is that it's a nuanced discussion, not one where you can be right or wrong. The interpretation of what the Second Amendment of the Constitution — which states that the "right of the people to keep and bear Arms, shall not be infringed" — means in 2016 varies widely depending on who you ask. "The right to bear arms is something that’s so ingrained in people’s heads," Hall says. "But people forget we’re supposed to be a United States of America and that’s the most important and more telling thing, you know, to really approach tolerance and really look at it."

Natural Selection doesn't take sides in the gun debate, but instead lets the viewer decide how he or she feels. The 48-year-old Hall doesn't remember the teen films of his generation taking this approach. He says that, in the '80s, they didn't spend too much time on the hard topics; instead, focusing more on teen romance. The biggest teens film of that era were the John Hughes classics like Pretty In Pink and Sixteen Candles; movies that are about finding teen love. They touched on issues like class and feeling like an outsider, but what stands out about these films was that they were fantasies that Hall says "had a lot of heart and compassion and at the end of the film, people ended up much better off than they started."

But Hall knows that the teens of Generation Z — those that have grown up with the internet — are coming of age at a time when mass shootings and terror attacks are part of their everyday lives. It's no surprise that the vast majority of teens, like their parents, may seem more concerned with the serious issues of the world than generations of teens past, and, in Hall's opinion Hollywood needs to start taking notice. Especially since teen films with a strong message continue to affect kids even now.

Hall has seen firsthand how The Breakfast Club continues to resonate with teens any time he goes to a Comic-Con event. "I’ll see little girls with Breakfast Club purses and wallets or whatever, and there’s my goofy face in the middle," Hall says. He thinks the movie still works 30 years later because "it’s all about bullying and the deconstruction of stereotypes." While The Breakfast Club's handling of guns in school may seem dated, the way it debunks long-held stereotypes that high schoolers fall into only one social category — "the brain, the athlete, the basket case, the princess, the criminal" — seems timeless.

"Ultimately," Hall says, "the takeaway of the movie is, you know what, we’re all more alike than we are different. It’s a beautiful message." It's a message of tolerance that Hall hopes more will take to heart. That, in these tumultuous times, more people will try to accept others instead of "seek[ing] to divide and conquer which is the whole message of the Trump campaign." To Hall, that message is "ridiculous. There’s nothing to conquer, America’s already great. It’s about embracing each other and how we all need to help each other, which ironically is the message of The Breakfast Club."

I mention that this message of embracing and helping others in need is also a theme in Natural Selection. Hall laughs, as if, for the first time, he realizes that his career is starting to come full circle. “I wasn’t trying to be so slick,” he says. “But that actually does work because it’s true. It really is.”