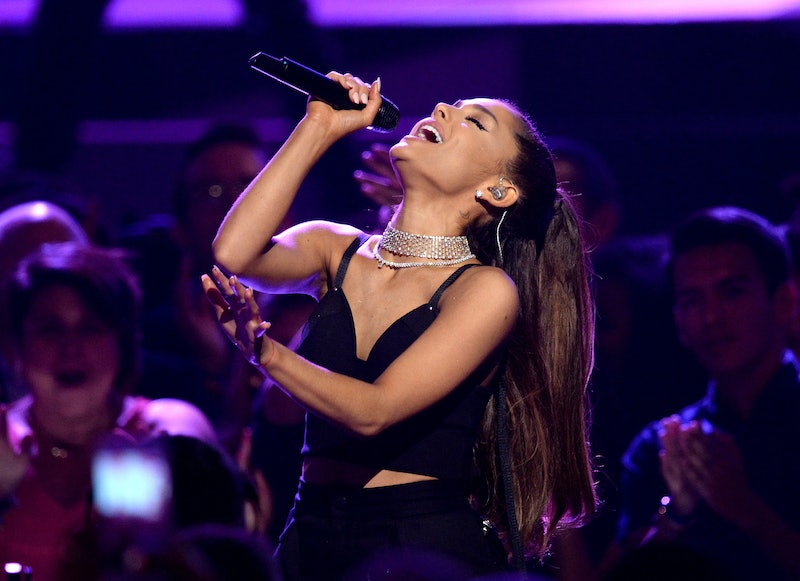 Lip-syncing is a bit controversial in the music industry — while some artists strongly condemn it, others have been known to the take the stance of commonality and practicality for entertainment sake. With the 2016 MTV Video Music Awards fast approaching, and a long list of musicians set to take the stage Sunday, viewers may be curious to know if the performances on stage will be authentic deliveries — including the performance that a certain four-octave pop princess is set to give during the show. Now, that she is performing at this year's show — which is being held at Madison Square Gardens on Sunday — it's worth asking: will Ariana Grande lip sync on stage during the VMAs?

It looks like this question is, surprisingly, a pretty easy one to answer. Though the 23-year-old light and sweet musician has been known for her share of headline-producing antics, she has never been brought up in any conversations about lip-syncing — except comedically, that is: Grande did lip-sync with Jimmy Fallon in a Tonight Show segment involving them speaking in popular songs for a whole conversation. But the searches for any hint of whether or not Grande has ever lip-synced stop there — so I'm doubtful that, with Grande set to go on in just a matter of days, that's not going to change any time soon. Aka, it's safe to say she likely since live during her performance of "Side-By-Side" (which is set to feature Nicki Minaj).

More like this
Pete Davidson Mentioned Kanye West & Ariana Grande In His Last 'SNL' Sketch
By Grace Wehniainen
Britney Spears Met The Weeknd & Sam Levinson, So She May Actually Be On 'The Idol'
By Jake Viswanath
Taylor Swift Knew Hayley Kiyoko & Becca Tilley Were Dating 4 Years Ago
By Grace Wehniainen
Mick Jagger Calls Harry Styles A "Superficial Resemblance" To His Younger Self
By Jake Viswanath
Get Even More From Bustle — Sign Up For The Newsletter