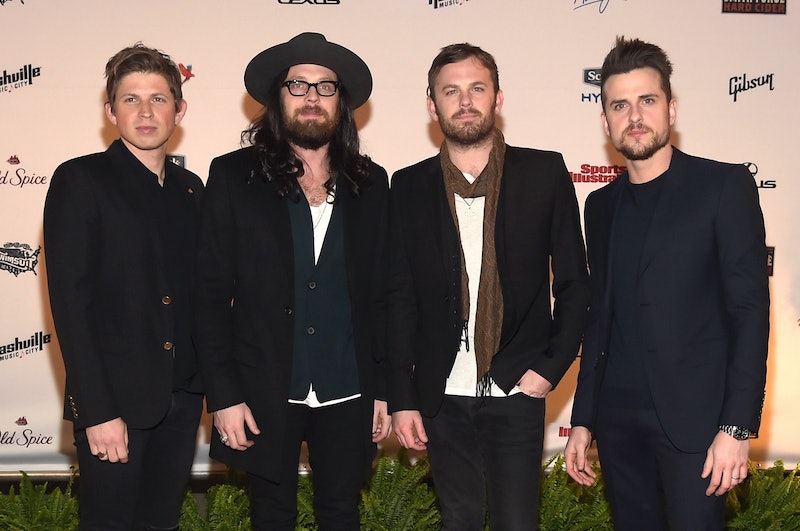 A question that I've been asking myself — and sometimes random people on the street (so fun!) — since 2013 is this: Do Kings of Leon still make music? Despite the fact that they were, arguably, the hottest band of 2008, no one's been able to answer this for me, until two days ago, when I saw that the band teased their upcoming seventh studio album on Instagram. Oh yes, Kings of Leon — arguably the hottest band of 2008 — is still making music. What's more, they are about to release an album for the first time in over three years. That's correct my friends, Kings of Leon has a new album coming out.

The band has spent 16 whole years in "the biz" (as some people like to call "the business of making music" or "the business of being in the biz"), and as we speak right now, they're putting putting the final touches on Walls, the album in question. It (Walls) will be released on October 14 of this year. According to a recent interview with Billboard, there's a reason the band members have kept quiet about the project. Caleb Followill, lead singer of the band and Mr. Lily Aldridge (felt like that was important to note), told Billboard, "We're not going the full Drake, day-of kind of thing, but we are definitely doing things differently."

Walls is the follow up to 2013's Mechanical Bull, but it's 2008's Only by the Night that most people think about when they think about Kings. Mainly the mega hit "Use Somebody," which became a Billboard Hot 100 song, and "Sex on Fire," another hugely popular jam from the album. Only by the Night sold 2.5 million copies and launched Kings of Leon into the spotlight. They've released two albums since Only by the Night, but neither have received as much attention.

To switch things up, the band has sought out a new producer. Markus Dravs (who has worked with bands like Arcade Fire, Coldplay, Mumford & Sons, and Florence and the Machine) was the man for the job and, according to Jared Followill, was hugely influential to the creative process of Walls. "He just said things that nobody had ever said to us. Like, 'I don't like that song, that's not good, we can move on from that.'" Jared explained that Dravs would make the band change styles at the drop of the hat. "He'd be like, 'OK, now play it like the Sex Pistols.' And then you've turned a slow song into a fast one." Dravs, you genius.

As you await the debut of Walls, peep the track list below.

If it's not already evident, I could use somebody like Kings of Leon in 2016. Welcome back.