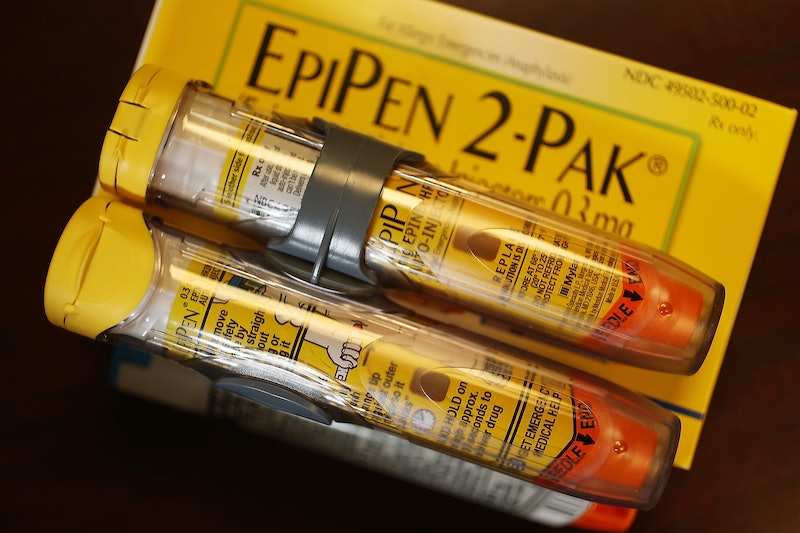 Mylan CEO Heather Bresch found herself in the hot seat Thursday as she tried to deflect national outrage over repeated price hikes of the lifesaving EpiPen devices. With public criticism mounting of Mylan's move to increase EpiPen prices more than 400 percent over the span of eight years, Bresch attempted to put the blame on what she called a broken health care insurance industry, driven by President Barack Obama's implementation of the Affordable Care Act. In an effort to ease the cost burden, Mylan has offered savings cards to eligible customers, but many aren't buying Bresch's defense, and claim the only solution is for the company to slash the lifesaving allergy treatment's price.

For many with anaphylaxis, an EpiPen can mean the difference between life or death. Which is exactly why continued price increases of Mylan's EpiPen have sparked such national outrage. In 2007, when Mylan purchased the EpiPen from Merck, one pack of two auto-injectors (currently, the only way the treatment is sold) cost roughly $100. According to The New York Times, the company steadily increased the price of the auto-injectors by 10 percent, before moving on to 15-percent increases. Now, the same EpiPen pack reportedly costs roughly $600.

That's a hefty price tag for a device with a low manufacturing cost. Each EpiPen delivers about $1 worth of epinephrine, according to Bloomberg, which claims that continued price hikes and effective marketing have helped Mylan make a billion-dollar profit off the device. Further fueling consumers' outrage are reports Bresch's salary rose from $2.5 million in 2007 to $18.9 million in 2015. Bresch claimed that the EpiPen price hike and her compensation were unrelated when asked about it by CNBC's Brian Sullivan. "I understand better than anyone that facts are inconvenient to headlines," she said.

Bustle was unable to reach Bresch for comment, but in an interview with CNBC on Thursday, she defended Mylan's steady EpiPen price hike as a required means of covering the company's marketing and distribution costs. "We’re manufacturing the product, distributing the product, enhancing the product, investing," she said.

According to Bresch, slashing the current price would reduce access to the EpiPen, as the company would be unable to continue campaigns aimed at providing the device at no cost. "When we took over this product eight years ago, there was very, very little awareness. We have doubled the lives of patients who are carrying an EpiPen. We have passed legislation in 48 states to allow undesignated EpiPens to be in schools."

Bresch said that consumers shouldn't be angry with Mylan, and that they should be angry with the insurance industry, claiming that a lack of transparency and the rise of high-deductible plans increasingly puts the burden of cost on the patient. "No one is more frustrated than me," Bresch said. "I am hoping that this is an inflection point for this country. Our health care is in a crisis."

It was a message Bresch echoed in a statement put out by Mylan on Thursday, as the issue continued to trend on social media. "We recognize the significant burden on patients from continued, rising insurance premiums and being forced increasingly to pay the full list price for medicines at the pharmacy counter." Bresch claimed that the higher cost EpiPen is a result of the Affordable Care Act forcing the insurance industry to evolve.

To help patients cover the cost, Mylan is offering eligible patients a savings card covering up to $300 off the EpiPen two-pack price while also doubling eligibility for its patient assistance program.

However, many critics weren't sold on Bresch's argument that Obamacare is really to blame. The American Medical Association urged Mylan to "rein in these exorbitant costs," and contradicted her claim that Mylan has enhanced the EpiPen, saying that the product is "unchanged" since 2009, Forbes reported. Leading insurance lobby group America's Health Insurance Plans criticized Mylan for failing to offer a solution that gets at the root of the issue. "Rather than actually taking steps to address the real problem of soaring drug prices, pharma companies try and cover their price hikes through patient assistance programs and co-pay support," said AHIP spokeswoman Clare Krusing.

While it is true that more Americans have high-deductible plans than ever before, (about 25 percent compared to 4 percent in 2006, according to Health Affairs), and that such plans often have a higher out-of-pocket cost for consumers, it seems Obamacare is more responsible for consumers finally feeling the pinch of rising prescription drug prices, rather than for the price hikes themselves.