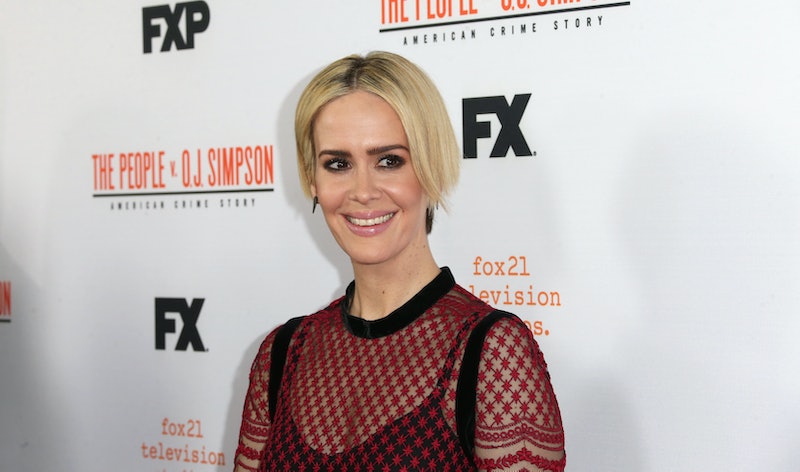 If there's one actress that I am never disappointed to see listed on an IMDb page, it's Sarah Paulson. Fortunately, this star has been listed on quite a few in recent years, and anyone who has caught her as the tough, whip-smart prosecutor Marcia Clark on American Crime Story can see why: The actress is a force to be reckoned with, and though she's been working steadily since 1994, she's finally getting the opportunity to do whatever the heck she wants in Hollywood. And what is it that she wants to do? Well, apparently the answer is everything. According to The Hollywood Reporter, Paulson is in talks for a role in Ocean's Eight , aka Ocean's Ocho, the long-awaited spinoff in the Ocean's Eleven franchise, and it's further proof that she's the right call for so many Hollywood projects.

Paulson has been a working actress for years, appearing on shows like Deadwood, Studio 60 On The Sunset Strip, and Cupid, but it wasn't until recently that the world stood up and realized that we had a Meryl Streep-level star in the making. You can thank Ryan Murphy-produced American Horror Story for showing viewers the light: after appearing as psychic Billie Dean Howard in a short arc in the anthology series' first season, she went on to co-star alongside Jessica Lange in its second as a reporter who winds up wrongly admitted to a mental asylum. The dramatic character jump was awe-inspiring: she melted into both roles so well that it was hard to imagine that Paulson was the same actress from the first season.

Paulson has received notable roles in each season of American Horror Story since then (even reprising her role as Billie Dean in the show's fifth season) and in 2015 got the role of her career with American Crime Story, re-telling the O.J. Simpson case and reminding the world that her character Clark was much more than the tabloid headlines about her hair. She's become a force in film as well, scoring roles in not one but two Oscar contenders — 2013's 12 Years A Slave and 2015's Carol.

Now that Paulson has received the clout from appearing in Oscar and Emmy favorites, it's impressive that she's interested in stepping out for something totally different. Should she accept a role in Ocean's Ocho, the film likely won't score her any accolades or receive any film festival laurels, but it will give Paulson a brand-new title on her resume: action movie star. Given her ability to transform herself into so many different characters, from conjoined twins on American Horror Story to one of the most famous lawyers in American history, I have no doubt that she'll be able to take on whatever role the heist film throws her way.

If she kills a role in Ocean's Ocho (and it's Paulson; she will if she accepts one) it would absolutely lead to a slew of other blockbuster offers for her to take her pick from — and there's no one more deserving of that than Paulson.