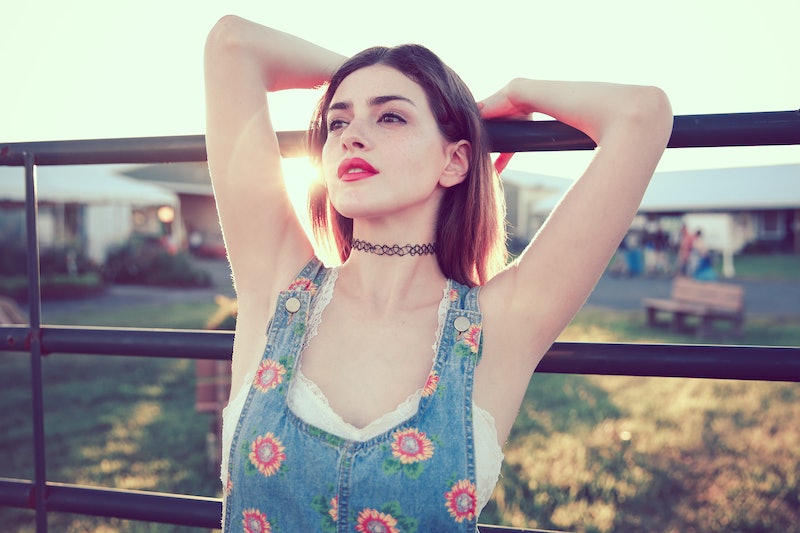 As a kid in the '90s, I looked to my older sister as my compass of cool. But by the time she got into high school and got really into peak of '90s fashion and culture, I no longer trusted that she was a reliable guide or source. When I'd see her leave for school in the morning wearing a velvet choker that made her look like a house pet on the loose, a flannel jacket that seemed better suited for a logger, and gym sneakers (with no intention of making it to gym class), I thought she had totally lost it. "Cool" was the last thing I'd think of her. If anything, it seemed like she was actively trying to rebel against such standards.

When she went off to college and I was finally able to sneak around her room — an activity I waited my whole childhood for— I realized I didn't really want to anymore. I didn't want to borrow her clothes. I didn't think her whiny, emotional rock music was worth stealing. And her brown lipstick was laughable. Little did I know these things would not only stick around for the remainder of her college stay, but through the end of the decade and into the new millennium.

Over 20 years later, the things I made fun of my sister for wearing are cool as ever. Supermodels love flannel. Radiohead sold out the Rose Bowl two nights ago and Kylie Jenner makes a living off selling rusty-toned lipsticks. Which is why I was totally fascinated to hear what Reddit user yfridi was able to garner when he asked what things that were cool in the '90s and are still totally cool today. Here are 11 of my favorites:

Who would have thought that the silly game kids played during recess in the '90s might end up being one of the biggest fads in 2016? It was definitely ahead of its time.

When I saw my older sister wearing a choker to school in the '90s, I thought she looked like she was wearing a dog collar. The last thing I thought was that it was a fad that would pick up and flourish in 2016. Alas, chokers are thriving in today's fashion.

When they first started to become popular among teens in the '90s, they were almost mythological. Their lyrics spoke of the things we didn't know we were feeling, they gave us the words to our own lives. All these years later, they're still doing the same thing — and selling out stadium concerts.

I remember my sister offering me her old flannel shirts from high school and being like "um, no thanks, donate them to a lumberjack society". If I could have gone back in time, I would have taken the bag of flannels and saved my twentysomething-year-old self a lot of money.

While South Park was the show of choice for '90s teens, Bob's Burger's and Bojack Horseman are certainly today's shows. We can't get enough of animated colorful faces saying bad words and making us laugh. And more and more it's becoming a vehicle for great comedy writing.

These were definitely the cool gym shoes to have, but now they've far exceeded the athletic sphere. They're so cool that they now fall into an "athleisure" category of fashion where people with no athletic intensions wear them. Because they look cool and feel great.

I wouldn't say she's having a comeback in Stranger Things and on the cover of Nylon Magazine, because she never really went away. But I would say that we, as viewers, are having a revival celebration of her. There's a similar buzz around her now as there was in the '90s. Talent never runs out of style.

Usually our lingo changes from year to year, but for some reason "cool" is still an appropriate and standard way of expressing approval or admiration. It even suffices conversationally in place of "OK."

This show was ahead of its own time. It became a cult sensation after it aired, had a revival when it became available on Netflix, and is now so popular it's getting a reboot with some of today's biggest stars. Like Pokemon, this show might have been brewed in the '90s but it was destined for today's audience.

In the '90s we would have never thought that there was a possibility the Clintons would be in the White House again. Now, with Hillary running for office, we're seeing more of them on the news then we did when Bill was in office. Hip then, hip now.