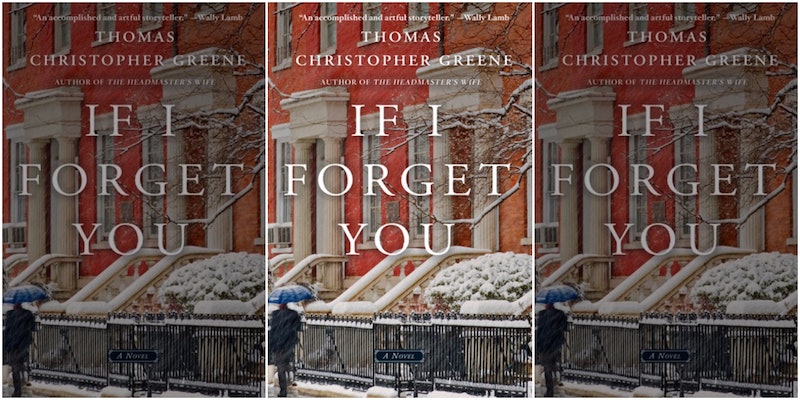 A few years ago, I was hosting a dinner party when one of my guests, an old college buddy, pulled me aside in the kitchen and asked me a question. He said, “Could I go up to your office for a moment and look at your Facebook account?” What happened next would lead to the inspiration for my most recent novel, If I Forget You.

When he explained why, I quickly agreed, and upstairs I logged him in and a moment later he had pulled up a photo of a Facebook friend of mine, and not of his, an old girlfriend of his from college and someone he had not seen in probably 25 years. As I watched, he stared in wonder at her visage, what she looked like now, and while he didn’t say anything in my presence, I saw how he gazed at her, how the years fell away, and in his eyes I saw the sorrow. He was so entranced, he didn’t notice when I slowly backed out of the room and left him alone with the photo on the screen.

I knew the vague details of their story. They were a couple for almost three years and then her father, for reasons it seemed related to class and the fact that my friend was Jewish, somehow persuaded his daughter to break it off and never see him again. What I didn’t know was that all those years later, now happily married and with children, he still pined for what he had lost.

One of my writing teachers once told me that all fiction starts with the simplest of questions: What if? When I thought of my friend that night looking at her photo and how it affected him, I began to wonder, what if they ran into each other again? Would there still be a spark? What would ensue?

If I Forget You by Thomas Christopher Green, $13.74, Amazon

That was the germ that led to my novel If I Forget You. It is, I should be clear, not his story, as he is not Henry, and she is not Margot. They are fictional characters. And the events that occur between them and that drive them apart and bring them together again, are also fictitious. This story is also not my story, though I do borrow liberally from my own life in all my novels, and this one is no exception.

I began this novel on a midsummer afternoon sitting on the deck of the small, seasonal lake house I own in northern Vermont. The resident loons had come in close to the deck and under the clear, cool water I could see the pair of them diving deep and then surfacing and then diving deep again. I thought about how loons mate for life and in that moment I decided to give Henry this house and it appears in the book almost identically to how it actually exists.

Unlike Henry, I am not Jewish and did not grow up poor in Providence, Rhode Island. I grew up Irish Catholic and middle-class in Worcester, Massachusetts, a similar-sized industrial city. I was not an only child, but the sixth of seven children. My baseball career ended in little league, though I did play basketball through high school and into college. And, like Henry, I went to a wealthy liberal arts college in western New York and often felt like I was on the outside looking in, and there, too, I experienced the first pangs of literary ambition and decided I would be a writer.

While I was in school, I also worked at a local winery, both as a farmhand and a salesperson. For years I’ve been trying to put that experience into a book, and so I also gave it to Henry. And the worst job I’ve ever had—at least the most dangerous—was in a staple factory, and I decided to give Henry this work as well.

In the end, though, what I set out to do with this book was write a great love story. A novelist friend once told me that all of us who are practicing what Mailer called “the spooky art” are essentially writing the same book over and over, trying to perfect what it is we want to say. I will leave it to others to decide whether or not If I Forget You accomplishes that. But I do know that a book, for me, has never been more fun to write, has never poured out of me quite so easily, and that when I finished it, part of me was sad that Henry and Margot would not be with me every day in quite the same way. That I would miss them. For I realized that I didn’t entirely know where this novel was headed when I was working on it, but that I had been rooting for them all along.

I hope readers will as well.

More like this
16 Novels That Paint A Realistic Portrait Of Abortion
By K.W. Colyard
5 Gripping Books To Read From Women’s Prize For Fiction Winner Ruth Ozeki
By El Hunt
'The Summer I Turned Pretty' Book Ending Is An Emotional Rollercoaster
By K.W. Colyard
Ottessa Moshfegh Is Happy To Be Your “It” Girl
By Arya Roshanian
Get Even More From Bustle — Sign Up For The Newsletter