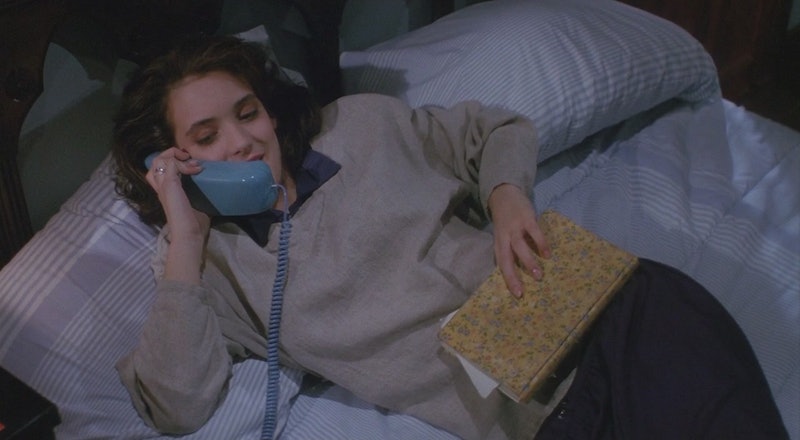 After you've binge-watched Stranger Things and marathon'd every John Hughes film, what more can you do to relive the 1980s? Read books to cure your '80s nostalgia, of course! I've got 11 great suggestions for you below, so grab yourself a Crystal Pepsi, fix a bowl of sugar-packed cereal, and settle in.

Although the 1980s will forever be burned into our memories as the neon-colored, pre-Internet heydey of the Teenager. High schoolers were having sex, doing drugs — sorry, Nancy Reagan — and getting themselves killed in deliciously gory horror movies. Films like The Breakfast Club and Pretty in Pink centered as important high school politics and the people they impacted. Outside of Midwestern high schools, however, events in the 1980s were changing the world forever.

In the entertainment world, John Lennon died. The first Pac-Man cabinets appeared in arcades. MTV and CNN began to broadcast. The Motion Picture Association of America created the PG-13 rating. Dozens of musicians came together to record "We Are the World" for the non-profit USA for Africa.

Technology made significant advancements. The first PCs — and the first PC virus — were born. Prosecutors convicted criminals using DNA for the first time. Scientists discovered the hole in the ozone layer.

Not everything was great. AIDS was named, identified, and largely ignored for a decade, as gay men, women, and people of color suffered and died without effective treatments. Mount St. Helens erupted. The Union Carbide gas leak in Bhopal, India killed thousands of people. Space Shuttle Challenger exploded just after takeoff. A disaster at the nuclear power plant in Chernobyl, Ukraine released more than 100 times more radiation than was dropped on Japan in 1944, killing 37 and wounding countless others.

As the decade closed out in 1989, the Exxon-Valdez leaked millions of gallons of oil on the Alaskan coastline. The Chinese government massacred thousands of student demonstrators in Beijing's Tiananmen Square. Reunification of East and West Germany began after the Berlin Wall fell. The World Wide Web was invented.

Today, our nostalgia for the Eighties lives on in TV shows like Stranger Things, The Goldbergs, and Halt and Catch Fire. Through them, we relive the Satanic Panic, blue eye-shadow, Just Say No, shopping malls, the Rubik's Cube, acid-wash jeans, the Smurfs, new wave music, Trapper Keepers, stirrup pants, and Aqua Net.

If all this is making you want to dust off your NES and play a few rounds of Punch-Out!!, check out the 11 books below to cure your '80s nostalgia.

After he's disfigured in an accident, Sean Phillips creates a snail-mail role-playing game called Trace Italian. When tragedy strikes two Trace Italian players, Sean must sort out the darkness in his own past.

Read Wolf in White Van if you miss everyone talking about — and being terrified of — occult-obsessed teenagers.

Romance blooms between two geeky misfits in Omaha, Nebraska, but midwestern racism and an abusive stepfather threaten to drive them apart.

Read Eleanor and Park if you miss having to share the family phone.

Read the Arkady Renko series if you miss Soviet communism being the biggest evil in the world.

Set in 1980s Westchester, Tell the Wolves I'm Home centers on June: a 14-year-old artist, hopelessly in love with another artist — her uncle, Finn — who is dying of AIDS. After Finn's death, June meets his boyfriend, Toby, and the two begin to add details to Finn's last painting.

Read Tell the Wolves I'm Home if you miss the abundance of free-range teens.

In an alternate version of Trenton, New Jersey in the 1980s, a young girl named Hope grows up in a dysfunctional family, and an evil corporation called LoboChem threatens the people and environment for the sake of its profit margins.

Read Magic America if you miss neon-colored everything.

Two kids' Christmas wishes take center stage in this short read. All the Doyle siblings want to find under the tree on Christmas morning are a brand-new Nintendo Entertainment System and a red-headed Cabbage Patch Doll. A non-chronological hodgepodge of 1980s kid culture flows throughout Kevin Jakubowski's debut novel.

James Bennett has synesthesia and a job as an art critic for The New York Times. Raul Engales is an Argentinian-American painter on the run from the Dirty War. United by Raul's muse and a mysterious orphan, the two navigate the early-80s art scene and try to figure out their internal lives.

Read Tuesday Nights in 1980 if you miss the idea of NYC as a gritty melting pot of starving artists.

In the early hours of Nov. 1, 1988, four 12-year-old girls discover an alien monster invasion on their Cleveland paper route. There's nothing for them to do but hop on their bikes and get their hands dirty in a coming-of-age investigation.

Read Paper Girls if you miss the days when Freddy Krueger and Jason Voorhees were scary.

9. Signal to Noise by Silvia Moreno-Garcia

In 1988, Meche Vega is 15 years old and living in Mexico City. She's just learned how to practice magic using music, which itself offers both protection and an escape from the abuse of her daily life. Meche's over-reliance on magic puts her on a fast track to heartbreak, however.

Read Signal to Noise if you miss making mixtapes from the radio.

Beijing Coma centers on Dai Wei, who has spent the last 10 years of his life in a waking coma after being shot in the 1989 demonstration at Tiananmen Square. Trapped in his body, Dai Wei provides an account of the then-and-now of his life and others' in late-20th century China.

Read Beijing Coma to remember what newsworthy events were like before the advent of the Internet.

In Northern Ireland during the 1980s, a young man finds his plans for the future complicated by his family's involvement with the IRA and his troubled dreams of the girl whose body he found preserved in a peat bog.

Read Bog Child if you've forgotten the unrest throughout Ireland and the U.K. during The Troubles.