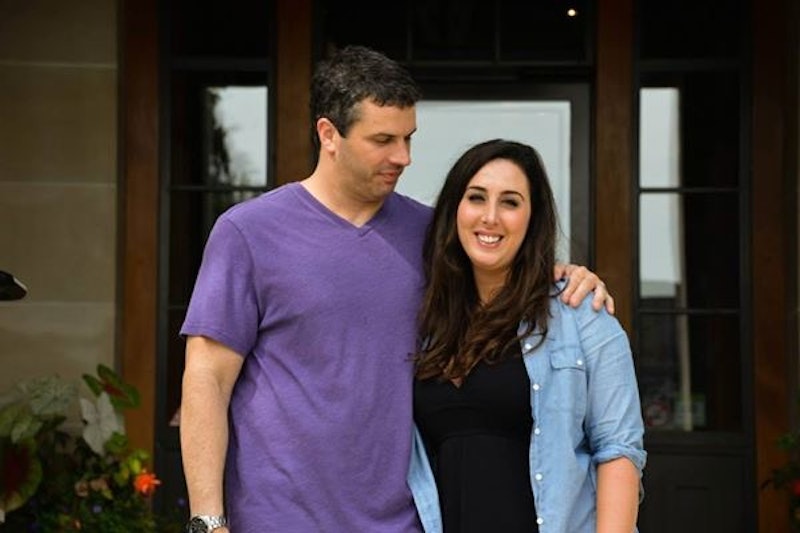 I have been pro-choice for as long as I can remember. But by the time I was married and pregnant with my first child, I didn’t really put much thought into the idea that I would ever need an abortion. I desperately wanted to have my baby. It took my husband and I six months to successfully conceive our daughter, and only a few moments to learn that she would never live. We found out halfway through my pregnancy, at a routine scan at 20 weeks of gestation. The purpose of the scan is to measure the baby, to make sure everything is developing properly, and for some parents, to reveal the gender for the first time.

We already knew we were having a daughter; I had already had plenty of advanced testing done to ensure the health of my growing baby. There are so many prenatal testing options available, and we wanted to take advantage of them for peace of mind — finding out I was going to have a girl was just an added bonus. I had all kinds of testing done; ultrasounds every four weeks and blood work to rule out any chromosomal abnormalities or developmental issues. Every test came back negative, so I thought I had no reason to worry when we walked into our 20-week ultrasound. I was wrong.

Evelyn, the daughter we had already lovingly named, was measuring far behind where she should have been for 20 weeks. A high-risk doctor came in to look, and told us that Evelyn had a lethal form of skeletal dysplasia, which is the medical term for dwarfism. We struggled to understand what this meant and how grave the condition was. The doctor explained that he believed our baby’s condition was not compatible with life. His words hung in the air. We couldn’t understand how this could happen. Everything was fine a few weeks ago. We had just bought a crib for her. This had to be some big mistake.

Devastated, we sought a second opinion at a world-renowned children’s hospital only an hour from our home. After eight hours of advanced testing, a group of specialists sat us down and told us that Evelyn had a condition called Thanatophoric Dysplasia (TD). TD is a very rare, spontaneous genetic mutation that usually presents itself in the crucial fetal developmental weeks around the midway point in pregnancy. Because babies don’t survive TD, it’s not a recessive gene that can be passed down, so it’s considered a complete fluke in the genetic lottery. Only 1 in 50,000 babies are diagnosed with TD, and ours just happened to be one of them.

The condition is characterized by misshapen and shortened limbs and a chest that is too small to develop lung growth. Evelyn had all of the textbook symptoms, and without proper development of her lungs, she would never be able to breathe on her own. We were given our options and sent home to grieve the family we thought we were making.

The options were bleak. I could chose to carry to term and see if Evelyn would even make it that far. If she did, she would likely live for a few hours, maybe even a few days. The other option was to have an abortion and spare Evelyn any possible suffering she might face. Given that her condition was not only lethal, but would be extremely painful for her as she continued to grow inside of me, my husband and I made the gut-wrenching decision to terminate my pregnancy.

Hearing friends say to me, "But what you did isn't really an abortion" undermines the heartbreaking road I have traveled. The choice I made was because I had a pregnancy crisis, which is why any woman chooses to have an abortion.

The days after the diagnosis and my decision to end my pregnancy were blurry and painful. I barely ate or slept, thinking about the gravity of our choice, but it was one I knew we had to make. Selfishly, we wanted to hang on, imagining that maybe the doctors had it all wrong and everything would magically be OK. But every time we started thinking about what could be, we remembered the images we saw firsthand on her ultrasound, and the magnitude of what the specialists told us. There was no denying how sick Evelyn was. As parents, it was our job to plan for our child to have the best quality of life, but we could not continue to plan for her to have no quality of life.

Once our decision was made, we were counseled extensively by doctors and nurses about what an abortion at my stage of pregnancy entailed, from the physical risks (which were lower than with a normal, full-term delivery), to the emotional pain I would experience. I would be allowed to have my abortion in a large hospital, in a safe environment, under excellent medical care. Because of my daughter's malformations, it was too risky for me to go through labor and delivery, so I was under anesthesia for my procedure and never got to hold the baby I spent so long dreaming about. At 21 weeks gestation, I chose to carry a lifetime of pain to spare Evelyn one moment of it.

In my home state of Pennsylvania, House legislators have just passed one of the strictest abortion laws in the country, which would criminalize women for having any second-trimester abortion for any reason (including cases of poor prenatal diagnosis, rape, and incest). Though HB1948 is blatantly unconstitutional, if it is made into law, women like me could be forced to carry their severely sick and dying babies to term while it is challenged in court. The bill's next stop is the State Senate, which returns to session Wednesday. So you must make your voice heard now if you don't agree with it. Anti-choice legislation can only be stopped by staying fully informed on how such bills will impact women and their families, voting for politicians on a local and national level who support the right to choose, and getting involved with organizations like Planned Parenthood, NARAL Pro-Choice America, and the National Abortion Federation, all of which help further women's reproductive rights.

This is an election year in which we still face multiple threats to Roe v. Wade . Targeted Regulation of Abortion Providers (TRAP) laws have been passing through State legislatures at an alarming rate, even though the Supreme Court recently made their strongest ruling in defense of a woman's right to choose in over 20 years. Current TRAP laws impose a huge burden on women’s access to care by shutting down clinics and lengthening the hours between the time you consent to the procedure and when you can legally receive it. They don’t just affect a woman’s ability to have an abortion; TRAP laws often make it nearly impossible for a woman to exercise their right to choose in the first place. While the Supreme Court's ruling should send a very strong message that abortion will remain safe and legal in this country, anti-choice lawmakers are still pressing forward with their personal agendas, and this election will decide the next generation's Supreme Court appointments.

As I adjust to life after saying goodbye to Evelyn, everything feels a little more personal. To watch politicians question my ability to make an educated yet devastating choice for my body and family has been painful and infuriating. The decision that was made for my baby was made after days upon days of difficult research, and after consulting the medical opinions of some of the best specialists in the country. To be scolded by anti-choice protesters and politicians alike about "the value of life" is something I will never get used to. I am Evelyn's mother, and no one valued her life more than I did. No one. Hearing friends say to me, "But what you did isn't really an abortion" undermines the heartbreaking road I have traveled. The choice I made was because I had a pregnancy crisis, which is why any woman chooses to have an abortion.

Despite how hard it is to hear the opinions and judgments about my family's very personal decision, it's much harder to stay silent and let those who don't truly understand what it's like to hear that your unborn child has no chance at life speak — or legislate — on the matter. So I will continue to share what it means to have a second-trimester abortion, because I believe that any woman, mother, or family could face this heartbreaking choice. And if they do, I want to ensure they still have a right to choose what is best for them and their baby, just like I did.

More like this
25 Inspiring Quotes From Black Women To Celebrate Black History Month
By Kyli Rodriguez-Cayro and JR Thorpe
The Cheapest, Most Clever Ways To Look Better With Almost No Effort
By Allison Bolt
'That '90s Show' Is Officially Coming Back For Season 2
By Gretchen Smail and Grace Wehniainen
The 7 Best Entryway Rugs For Every Budget
By Mackenzie Edwards
Get Even More From Bustle — Sign Up For The Newsletter
From hair trends to relationship advice, our daily newsletter has everything you need to sound like a person who’s on TikTok, even if you aren’t.