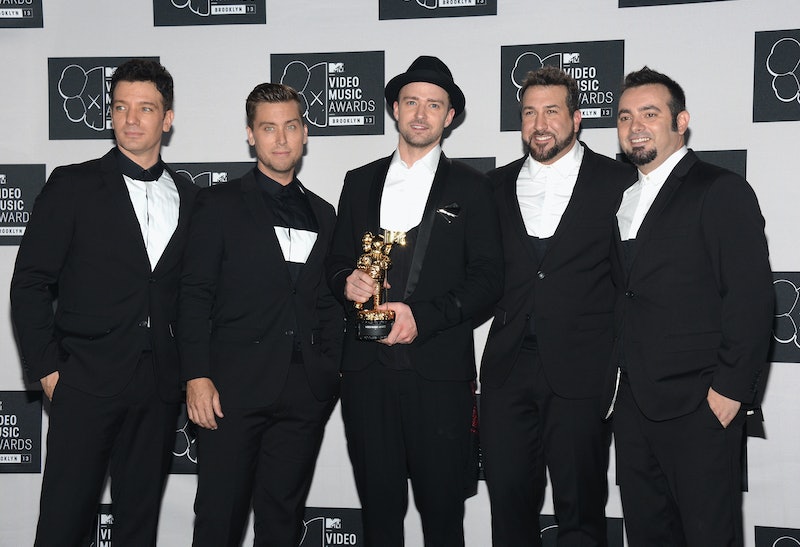 Lou Pearlman was one of the most significant music managers of the '90s. It was he who put together superstar bands and helped legendary artists rise to prominence: boybands like Backstreet Boys and *NSYNC wouldn't be around if not for him. However, Pearlman's career successes are hardly the only thing you'll hear about him: In 2008, he was convicted for a number of fraudulent business schemes, and sentenced to 25 years in federal prison. Most recently, he passed away behind bars at the age of 62. If you're thinking his life sounds pretty close to being a telenovela, then somebody at Condé Nast is so with you, because the media company is bringing the world a limited TV series in tandem with Magnet Management. But what would the Lou Pearlman TV series be about, exactly?

While writing hasn't yet begun on the series, apparently it will include "details of his rise from blimp business owner to the music mogul and then his fall to fraud." Vulture has also stated that the Lou Pearlman series will be based on the recent New Yorker article, "We Live in the Pop-Culture World That Lou Pearlman Created" by John Seabrook, about him — the piece itself is smart, strangely touching and definitely worth a read. This said, in anticipation of a show, I've gone through the article for you to pinpoint possible plot points that the TV series will cover. In short: boybands, blimps, Ponzi schemes, and even Britney Spears.

We discover in the New Yorker article that Pearlman's first cousin was Art Garfunkel, of Simon & Garfunkel fame and that Pearlman himself had nursed a dream of becoming a pop star, "but he wasn’t built for the part, being short and fleshy." By the time he hit college, he'd changed his goal to something he felt he could achieve: becoming an entrepreneur.

By the time Pearlman got into the boy band game, he already had his own blimp company, because why not. The New Yorker article details how Pearlman would advertise auditions in Orlando newspapers and then hold the auditions on his blimps, "keeping the blimps’ fans running to cool the performers." Eccentric audition venue? Check. So far, perfect for television.

If you like boy bands in matching outfits singing in perfect harmony, this is the show for you. Not only did Pearlman put together *NSYNC and Backstreet Boys, but a whole bunch of others too: "Lyte Funky Ones (LFO), Take 5, C-Note, and Innosense, an all-girl group." Also O-Town! Let's not forget O-Town. Ever. In any context.

In an move that seems equivalent to accidentally chucking away a winning lottery ticket, Pearlman came so close to signing the then-unknown 15 year old Britney Spears for his girl group, Innosense — according to the New Yorker, he even drew up a contract for her to sign, "but she slipped through his fingers." Can you even imagine? As a music manager, that wouldn't so much be a lifetime of regret as multiple lifetimes, all stacked up on top of each other. All the tears.

One of the most fascinating parts of the New Yorker article is when it quotes Pearlman on his reasoning behind why he would put together a rival to his own band, Backstreet Boys, when he created *NSYNC. Pearlman told the article's author Seabrook when he was interviewing the music manager for his book, The Song Machine, "My feeling was, where there’s McDonald’s, there’s Burger King, and where there’s Coke there’s Pepsi, and where there’s Backstreet Boys there’s going to be someone else. Someone’s going to have it; why not us?”

According to the New Yorker article, Pearlman was accused of fraud later in his career, and eventually convicted of charges of conspiracy, money laundering, and making false statements during a bankruptcy proceeding. The article stated that Pearlman had run a series of fraudulent business schemes and strung along investors in them, including an airline called Trans Continental (according to the New Yorker, the planes that were photographed in brochures for the company were actually model planes), and an insurance-business scam.

But this and Pearlman's eventual conviction for conspiracy, money laundering and making false statements aren't the only factors tarnishing his legacy. More troubling were the allegations made against him of "sexual impropriety with some band members." No victims have explicitly come forward to accuse Pearlman of wrong-doing, and Pearlman has denied any and all allegations against him, saying in a 2014 Hollywood Reporter article, "You know, the accusations that came out... none of it was substantiated. Nobody who I've made a success has ever accused me of anything negative like that. Quotes from those claiming to have witnessed alleged inappropriate behavior from Pearlman are around. In an article Vanity Fair released in 2007, Steve Mooney "an aspiring singer who served as Lou Pearlman's assistant" said, "I would absolutely say the guy was a sexual predator. All the talent knew what Lou's game was. If they say no, they're lying to you."

There were also allegations against Pearlman in the 2014 Hollywood Reporter piece, this time from a "high-ranking former Trans Continental staffer (who asked to remain anonymous to avoid being drawn into any legal disputes)." He recalls how, in 2000, Pearlman became close to Ikaika Kahoano, a finalist on Pearlman's reality show Making The Band:

The source reported that Kahoano became visibly uncomfortable in Pearlman's presence and allegedly "completely freaked out" when Pearlman tried to touch him. Kahoano "abruptly" quit the show and the band O-Town mid-season, and refused to comment for the Hollywood Reporter piece.

Nick Carter, who worked with Pearlman as part of The Backstreet Boys, backed up Pearlman's denials against the allegations of sexual impropriety against him in an interview with MTV:

"There's a lot of people who maybe were involved in our stuff in the past who want to take an opportunity maybe because they are a little bitter, you know, maybe because of where they are right now...and they tend to, like, throw us under the bus, you know what I mean? Because of where we are right now. I mean, I'm not naming anybody but ... any attack on any one of us in this group is an attack on the whole entire group."

I'm not too sure how a series would begin to handle all of the different facets of Pearlman's career and life, but considering its basis — the fantastic New Yorker article — I'm keeping faith.