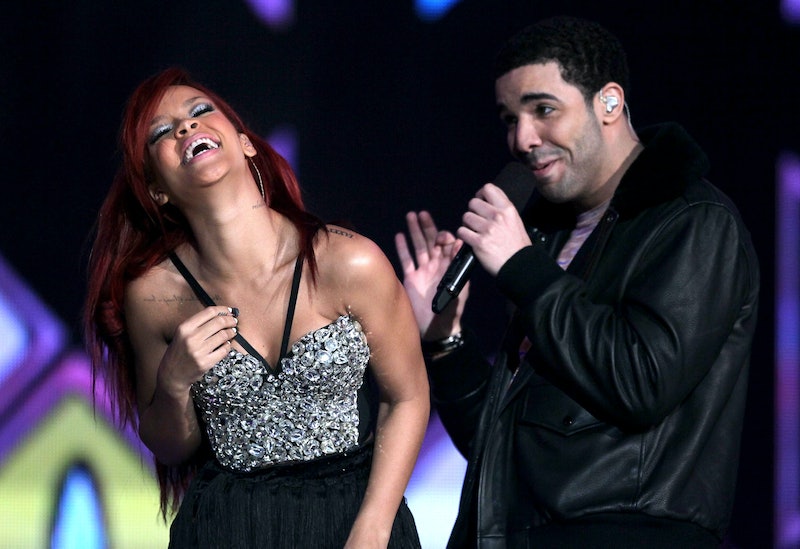 It's the greatest love saga of our time: Drake and Rihanna. Rihanna and Drake. Mom and Dad. Whatever you want to call them — they're legendary, even if they aren't truly together. Case-in-point: During Sunday Night's MTV 2016 VMAs, Rihanna will receive the Video Vanguard award, the highest honor once can receive at the VMAs — so, naturally, Drake had to do something grand to show his support. Enter: a magnanimous congratulatory billboard note. Oh, that's right, Drake gave Rihanna a billboard. (I mean, sort of. He gave her a congratulatory message on a billboard, he didn't like, physically hand her a billboard because that would be both weird and difficult.) So, since this is — I don't know, the sweetest gesture ever — it means they have to be dating right? Right...?

Black-ish actress Yara Shahidi first tweeted a picture of the board, which read: “Congratulations to Rihanna from Drake and Everyone at OVO." Then, Rihanna herself decided to repost the image on her own Instagram, captioning it "When he extra❤🏆!!!" He sure is extra. You know what else is extra? The adorable relationship between these two. Though the pair has never confirmed their romance, when someone introduces you as "the most beautiful, talented woman I've ever seen," at your concert, and then buys you billboard notes, I think it's safe to say that at the very least, they are romantically into you, and at the very most, your soul mate.

Will we ever really know if these longtime musical collaborators and friends are dating? Eh. Hard to say. One things for certain though, the two are getting more and more used to some public displays of affection. Because what's more public than a giant billboard that basically says "Proud of you wifey"? And then an Instagram response of said billboard that basically says "Thank you, you are the light of my life?" I'm extrapolating the wording, sure, but you get what I mean. It's a big deal.

Although it's difficult can't reach any definitive conclusions regarding their relationship at this point in time, we can all look forward to Rihanna's Vanguard Award acceptance on Sunday. Executive producer Jesse Ignjatovic told EW that her performance will be huge. “I can tell you it’s going to be one of those holy crap VMA moments. She’s not playing. She’s bringing it.”

Now, the only question is, will Drake be there to give her flowers? Or will he just go with a whole garden?