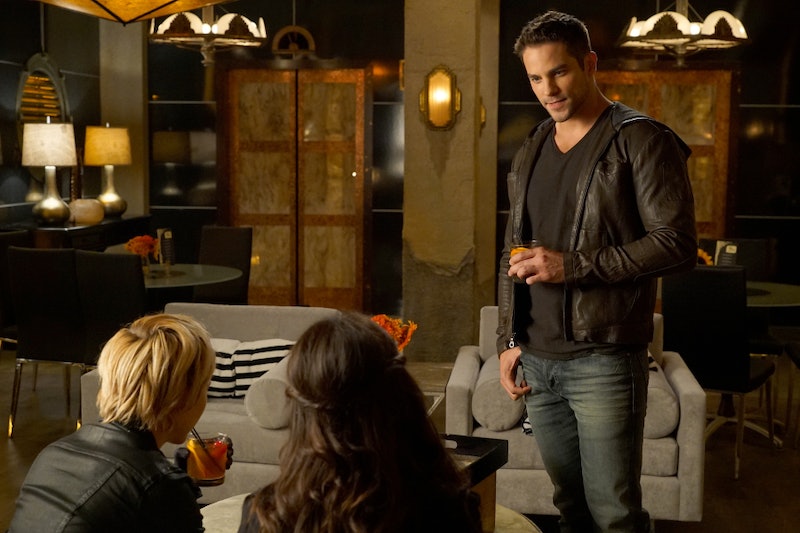 When it comes to Pretty Little Liars, there's one thing we can always count on — secret family members abound and every time one shows up, a whole new set of mysteries arises. Case in point — in the Season 6B finale, we learned that (surprise!) Jessica DiLaurentis had a twin sister who may or may not be evil. (The verdict is still out on that one.) The latest twist is that Mary Drake had a second child while she was at Radley, so now it's time to speculate about who that person may be. There are precious few clues, but one thing is clear — Noel Kahn can't be Mary Drake's son on Pretty Little Liars.

At this point, we know next to nothing about Mary's child except that he or she would be the same age as the Liars — so that doesn't exactly narrow down the list very much. Fan theories abound, and it seems like the most popular suspects are Aria, Spencer, and Andrew Campbell. Dr. Cochran can't remember the baby's gender, only that he or she was underweight and a "fighter." In the Aug. 23 episode "The Wrath of Kahn," Aria jumped to the nonsensical conclusion that Noel Kahn is Mary's son — and, although their connection is suspicious, it seems impossible that they are mother and son.

When the Liars found legal documents showing that Steve Kahn was the judge who presided over the adoption of Mary's child, Aria seemed to think this meant Steve Kahn himself adopted Noel. There's just one problem — that's not exactly how adoptions work. A judge can't preside over his own adoption and, although Pretty Little Liars is known to take artistic license with certain legal issues, this would be a pretty major oversight. It seems like what the document really means is that Steve is the only person who knows the identities of Mary Drake's child and his or her adoptive parents. So, the logical next step would be for the Liars to attempt to find Steve and get this information out of him.

To be fair, there was another clue in the episode that pointed towards a familial connection between Noel and Mary — video footage shows that he was in the Dollhouse and was the individual who poured blood all over Spencer, leading her to believe that she'd killed someone. Although many of us have speculated that Mary was helping Charlotte in the Dollhouse, that still hasn't been proven — and Mary recently stated that she didn't even know Charlotte was aware of her existence. (I'd take anything Mary says with heaps of salt, but we still don't know for certain that she and Charlotte ever collaborated at all.)

Although Noel isn't Mary's child, he may know his or her identity. It's possible that Noel is being blackmailed by someone in order to prevent the Liars from learning who Mary Drake's son or daughter really is — Ali has some dirt on him and he's been blackmailed in the past. There are still many unanswered questions about Noel, but one thing we can be sure of is that he's not Mary's kid. And, unfortunately, we're going to have to wait until Season 7B to find out the identity of Mary Drake's child, according to Entertainment Weekly. Luckily, Pretty Little Liars fans have learned to be patient and we'll continue to theorize away until the big reveal.