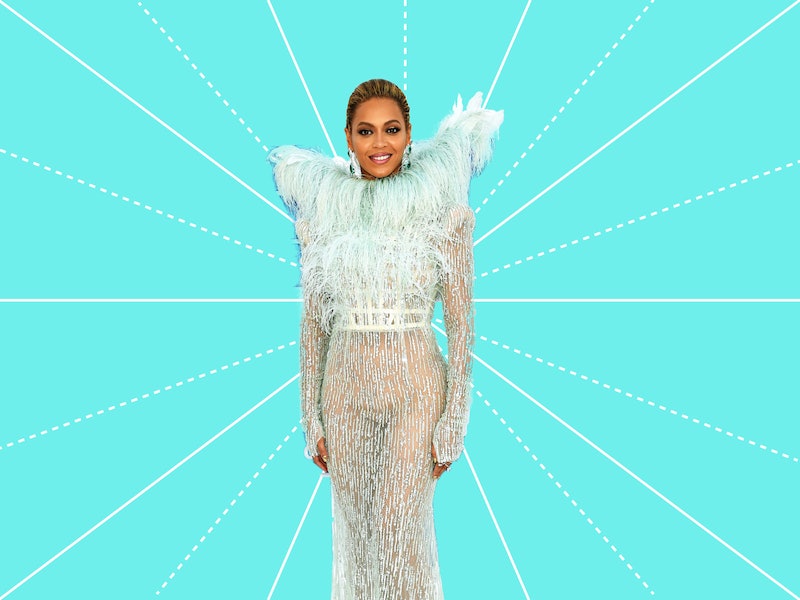 Wherever Beyoncé goes, she has a tendency to make history. She's one of those people who elevates any room, any ceremony, and any stage just by being present. Yes, I'm a huge Beyoncé fangirl, but who wouldn't be after Beyoncé's 2016 MTV VMAs performance? She's been essentially ruling the game since the surprise release of her 2013 album BEYONCÉ, and she protected her crown and her throne with the release of 2016's Lemonade. Thus, it's no wonder that the singer was nominated for no less than 11 awards at the 2016 MTV VMAs, nor is it a surprise that we were all blessed with a Lemonade performance by her. If you don't remember when she performed at the 2014 VMAs and put on such a show that people joked about how nice it was for Beyoncé to let MTV have a little award ceremony before her concert, then the Queen reminded you of exactly why we call her that on the stage here in 2016. But, even more important than that, she flashed a certain message across the stage during the performance that every fan really needs to take to heart.

GOD IS GOD I AM NOT. These words flashed across the screen behind Beyoncé during her performance of "Don't Hurt Yourself," and it was relatively easy to miss if you weren't specifically paying attention — unlike the FEMINIST sign she proudly stood in front of in 2014, with the lights down so that no one missed a thing. I think we do need to pay attention to that sign tonight, and what that sign represents. For all that Kanye West wants to stylize himself as Yeezus, Beyoncé is the one that everyone — even Kanye — worships. She is a queen, she is a goddess, she can make everyone throw their hands up in praise every time she steps into a room. And her message directly rebels against that.

Coming in the middle of the song's lyrics, "When you love me, you love yourself. Love god herself," the song sang before GOD IS GOD I AM NOT flashed across the screen. Beyoncé then threw herself back onto her feet, screaming, "You just gotta let it be, babe. Who the f*ck do you think I am?" And I think it was a very deliberate choice on her part to flash the message in the middle of that particular song, in the middle of those particular lines. Beyoncé wants you to love God, not her. To worship God, not her. Because she isn't a god. And that's not only a religious statement on her part. It's also a deeply self-aware one.

Because, the truth is, by calling Beyoncé "Beysus" and treating her as a god, we're doing her a disservice as her fans. To call her a god is to imply that she has reached the peak of what a human can accomplish, to such a point that we consider her divine. To call her a god is to imply that she is perfect in every way, instead of the real, flawed human being who maybe photoshops her Instagram pictures and who is enough of a troll to drop an entire album about cheating a few months after she was the subject of divorce rumors. It's to ignore the fact that Beyoncé still has heights left to reach, that she works very, very hard to be the Queen that we all know and love. To maintain that strong physique. To maintain her voice. To maintain her reputation. She's not #flawless, but now, three years after declaring she wakes up that way, Beyoncé is stopping us in our tracks to remind us that she is human.

And that, to me, was a powerful moment in a powerful performance. Beyoncé hit the stage with so much passion and artistry that the rest of the ceremony after her performance seemed downright boring. And the fact that she could do that is the result of so many years of hard work and planning, rehearsals and mess-ups, and very, very, very human things like practicing to be that perfect. So, if you take nothing else from Beyoncé's performance on Sunday, take the fact that she is not a god. She's just Beyoncé, doing the best that she can for as long as she can. Save the worship for whatever god you believe in, because she wants fans not followers.