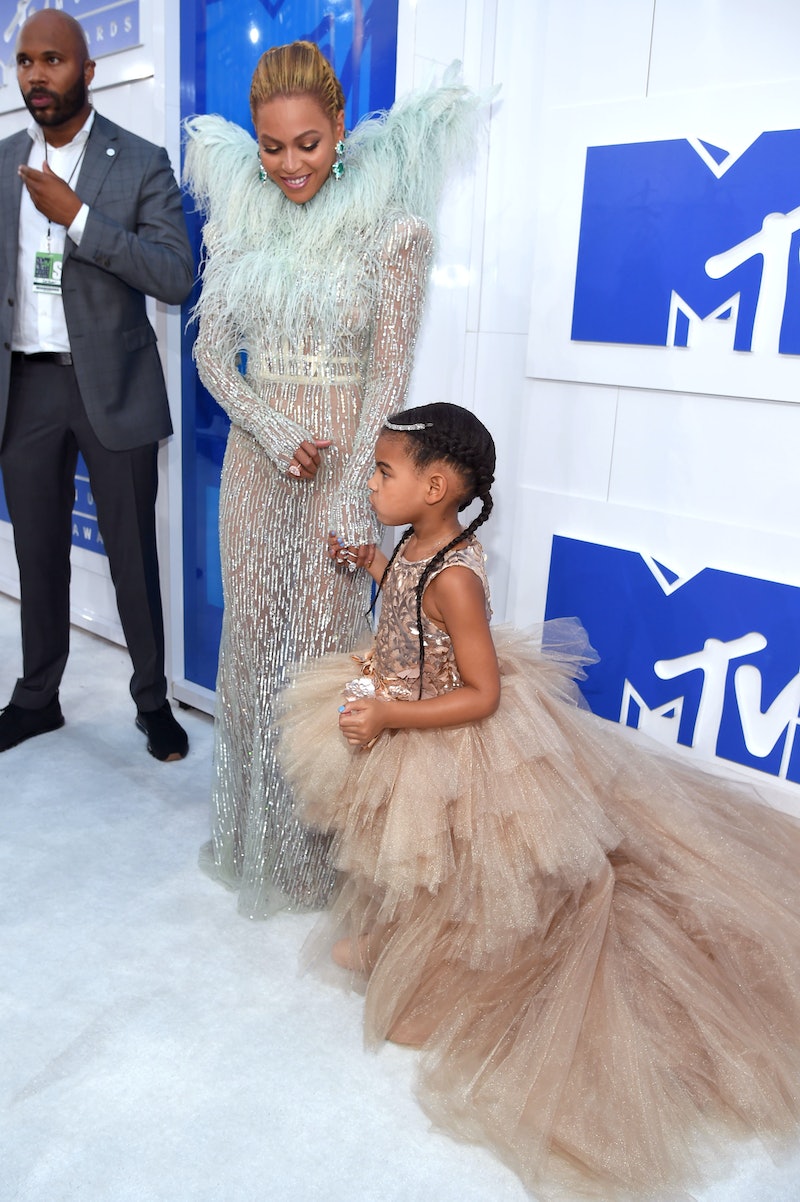 Celebrity babies are nothing like us. They have been written about since they were just a fertilized egg the paparazzi somehow found out about. Some, like Prince George, had a wikipedia page about them before they were even born. Some, like Blue Ivy, have been attending the VMAs since before they were even born. No, really. Twitter user @rachel took the time to remind us all that Blue Ivy's first time attending the MTV VMAs was not this Sunday, when she appeared on her mother's hand on the red carpet, nor was it in 2014, when she and Jay Z danced along to Beyoncé's showstopping performance. Oh, no, Blue Ivy's history with the VMAs goes all the way back to 2011, when Beyoncé took to this very stage to announce that she was pregnant with Blue Ivy in the first place.

You remember how Beysus shut it down. She performed "Love On Top" on the stage, and then unbuttoned her jacket and rubbed her stomach to let the entire world know that she and Jay Z were expecting a child. That child would eventually become Blue Ivy, and appear on not one but two of her parents' songs, not to mention win the hearts of people all over the world with her gorgeous hair and on point fashion. (Whether she's more or less beloved than North West is for you to decide.)

But the fact of the matter is that Blue Ivy didn't exist as a human person in the world in 2011. It has been five years since Blue Ivy was born. I want you to sit for a moment and think about how old you are, that Blue Ivy is already 5-years-old, when it seems like just yesterday that her upcoming birth was announced.

Did that f*ck you up? Because it's f*cking me up. First of all, it's so adorable to see Blue Ivy once again in the place where we all celebrated her for the very first time. Second of all, when did she get so old? What happened to us guys? Why is time moving by so fast? Next thing you know, I'll be 30 years old and wondering where my 20s went. In fact, when I'm 30 years old, then Blue Ivy will be 9-years-old. Time is slipping through my fingers, and I can't stop it. Help me, someone, help me, the tears I am crying are coming from so many different places right now.

On the one hand, it's really cool to see how frequently Blue Ivy has attended this awards ceremony we all tune in to every year. But, on the other hand, has it really been five years since Beyoncé shut it down with a "Love On Top" and a pregnancy announcement? And, more importantly, is she going to announce another one on Sunday? If you need me, I'll be rocking back and forth in a ball and thinking about the marathon that time appears to be running around me.