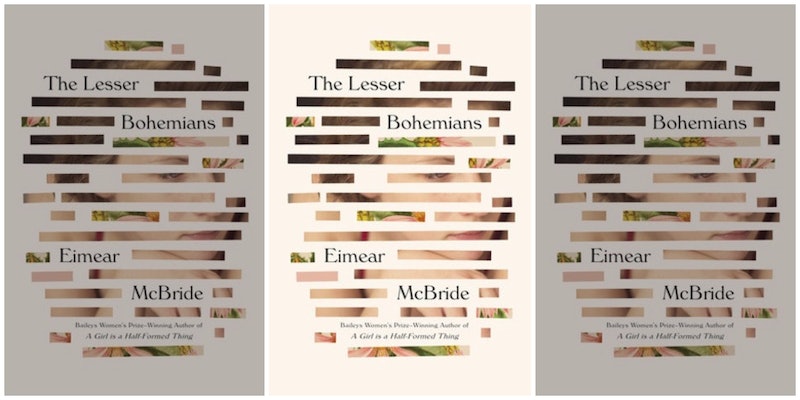 I’ve been with Eimear McBride since the beginning, before her debut novel, A Girl is a Half-Formed Thing went on to win the Bailey’s Women’s Prize for Fiction, the Geoffrey Faber Memorial Prize, and the inaugural Goldsmiths Prize — awarded to works of fiction that expand and redefine the traditional parameters of a novel’s structure, established the year AGHFT was published — among others, and became a much buzzed-about title of 2013. So when the arrival of McBride’s second novel, The Lesser Bohemians , was announced, I knew I need to get my hands on a copy immediately. You’ll want a copy of The Lesser Bohemians for your own bookshelves too; and here’s why:

McBride’s second novel takes readers back to London, 1994, and tells the story of a single year in the life of an 18-year-old Irish theater student named Éilís (although we aren’t privy to her name — or any of the main characters’ names, for that matter — until nearly the end of the novel.) Encountering the heady, vibrating pulse of London as an awkward, inexperienced young woman living on her own for the very first time, Éilís struggles to make friends, and dives headfirst into an unfamiliar world of alcohol, drugs, sex, and dramatic study — engaging in performance as much in her real life as she does both in the classroom and onstage. She lets her new peers believe whatever they want about her — nodding her head in acknowledgment of things she has no firsthand knowledge of, and letting her silence in response to various questions act as an invitation for those around her to assume whatever one will about Éilís.

“And the shop talk, I can only half make, working place for itself in my brain. Swim swim, maybe you’ll find in to the life they apparently share … I let the nice lie slip settle against and wonder how I might make it fit?” – Eimear McBride, The Lesser Bohemians

This is most often in reference to sexual experiences, and while Éilís is a virgin when the novel begins, she uses a laissez faire attitude about sex to cover up the fact that she suffered sexual abuse as a child. Until she meets Stephen, that is — a fellow actor who is 20 years Éilís’s senior and who, as it turns out, suffered abuses of his own as a young boy as well. Despite the age difference, the two embark upon a torrid and explosive affair — one that forces them to encounter the darkest and most violent aspects of themselves and their pasts, that tests the limits of their compassion, and that transforms them utterly into far better versions of themselves.

For young Éilís, this affair is about figuring out what kinds of things she’ll use to form the girl she is, while growing into the woman she is becoming — strong, empowered, artistic, and free; while for Stephen, this is more about amending past mistakes and becoming the man he never gave himself the opportunity to be — healthy and sober, responsible, enduring, and at peace. Ultimately, The Lesser Bohemians is a novel about two people of different ages and at very different junctures in their lives, who manage to meet each other in exactly the same space of transformation — one that acts as a jumping-off point for the kinds of lives they were always meant to lead. And yeah, who have some pretty great, and pretty terrible, sex along the way.

“When I first came here I wanted the world to look at me and now I might prefer to be the eye instead.” – Eimear McBride, The Lesser Bohemians

If all that doesn’t convince you you’ll want to pick up a copy of this novel when it hits shelves in September, then stick around, because here are 5 more reasons why you’ll want to read Eimear McBride’s The Lesser Bohemians .

The first thing every reader notices about Eimear McBride’s novels is her writing style — and while the stream-of-consciousness prose that lacks traditional punctuation and regular line breaks might throw you off initially, if you stick with it long enough you’ll realize that McBride is actually doing something really cool. When you read The Lesser Bohemians, you’re not restricted to the status of “reader,” bearing witness to only what the narrator wishes you to see, and what the narrator herself observes. Instead, you are transported directly into the mind of the narrator — if she is intoxicated, the writing reads as such; if she is trying to work out some idea in her mind, you get lost in the disjointed meandering of her thoughts; if she’s experiencing a moment of clarity, you feel the empowerment of her voice rise up in your own reading. McBride, through her writing style, demands that readers play an active role in the narrative, by putting you directly inside her narrator’s head, come what may.

The flip side of this sometimes-difficult-to-adapt-to writing style is that McBride’s prose is both interesting and beautiful. By placing readers inside Éilís’s mind, she’s made space for all the unfiltered, unedited, mental ramblings of an 18-year-old — and the resulting language is fresh, unadorned, and often gorgeous. For example, when Éilís describes the experience of walking through London for the first time: “…walking on its streets, a higher tide of people than I have ever seen and — any minute now — In. Goes. Me.” You aren’t just watching her leave her apartment and walk down a crowded street — your actually physically sucked into the horde of commuters with her.

Or perhaps, being drunk: “Enslithered by pints…”

A first kiss: “thrillpleasuredread… flips all my blood over.”

And a break up: “Then I am back in the world and must understand again how to cover my bones with my skin.”

The invented words and smashed-together emotions are of the kind that might be edited away in a traditional narrative, but they’re what make The Lesser Bohemians, and McBride’s writing in general, so unique, so must-readable.

2. In Some Ways We’ve All Walked In Éilís’s Shoes

Even if you’ve never experienced sexual abuse — and I certainly hope you haven’t — there’s still something so cringingly relatable about all the really bad (and I mean truly terrible) sex Éilís has as she loses her virginity and begins to learn through experience how she prefers to exist within her own body — sexually and otherwise. But mostly sexually. Seriously, it was like being right back in my freshman year college dormitory all over again, in all the worst ways. But what’s even better than being made to feel less alone in your less-than-illustrious sexual history is being able to witness the immensely empowering journey of Éilís finally arriving in her own body.

And as Freudian as her journey often is — teenage girl makes peace with the abuse of her past and her older-man issues by having an affair with an older man — not once do you get the sense that Éilís isn’t in complete control of her destiny. Sure, sometimes she makes mistakes, chooses poorly, and finds herself a tad in over her head, but even in her worst moments she’s owning her life. From the beginning it’s clear that Éilís is the one calling the shots, and Stephen, though on a transformational journey of his own, is really just along for the ride.

3. It Acts As A Sister Story To Her Debut Novel A Girl Is A Half-Formed Thing

In so many ways, Éilís’s journey runs parallel to that of the unnamed narrator in A Girl Is A Half-Formed Thing — both young women are dealing with the experiences and effects of sexual abuse, and both experiment within their own bodies as a result of what they endured at the hands of others. But where the narrator of AGHFT loses herself in a downward spiral of violent and unfulfilling intercourse, Éilís’s path is a more reflective one. While she experiments with plenty of sex and substances, she’s more interested in learning how to exist within herself than she is in harming herself. Éilís wants to learn how to share a healthy sexual relationship with someone, and she’s not shy or afraid about taking some pleasure of her own along the way. While both of McBride’s novels share similar premises, The Lesser Bohemians offers redemption and recovery where AGHFT did not.

4. Readers Are Going To Be Talking About It — And You Know You’ll Want To Join In

Readers either seemed to love or hate A Girl Is A Half-Formed Thing — or simply didn’t understand it at all — and the same will no doubt be true for The Lesser Bohemians. Whether your fellow readers can’t get past the unconventional style and tire of the frequent sex scenes, or love both Éilís and the experience of being placed directly inside her thoughts and feelings, if you’re any kind of book lover you know you’ll want to weigh in. I love debating McBride’s writing with my best reading buds, and this novel will without a doubt be my next book club pick.

5. McBride Is Something Of A Literary Success Story

If you’re a writer (or an avid reader, for that matter) then you know novels that don’t conform to the traditional mold usually have a much longer path to publication than those that do. This was definitely true for McBride’s debut novel, which is anything but traditional. The novelist sat on the manuscript for A Girl Is A Half-Formed Thing over nearly a decade, enduring one rejection letter after another from mainstream publishers until the England-based independent publisher Galley Beggar Press took a chance on publishing the book in 2013.

A mere three years later McBride’s second book — which she supposedly began writing before AGHFT had even landed a publisher, and which she claims helped her get over the sting of repeated rejections — is set to hit shelves, this time via Crown Publishing Group imprint Hogarth Press. Plus, AGHFT has since been adapted into a widely performed play, one that has been celebrated as both “feminist” and “startling”. If that’s not a literary tale of triumph over the status quo, I don’t know what is.

More like this
The 'Lady Chatterley's Lover' Book Leaves Us With A Troubling Question
By Catharina Cheung
Allie Rowbottom Will Have Her Feminism With A Side of Botox
By Samantha Leach
The 'Firefly Lane' Book Ending Teases Way More Tears To Come In 2023
By K.W. Colyard
'Bridgerton' S3 Teases Exciting Social Season For Penelope Featherington
By Bustle
Get Even More From Bustle — Sign Up For The Newsletter