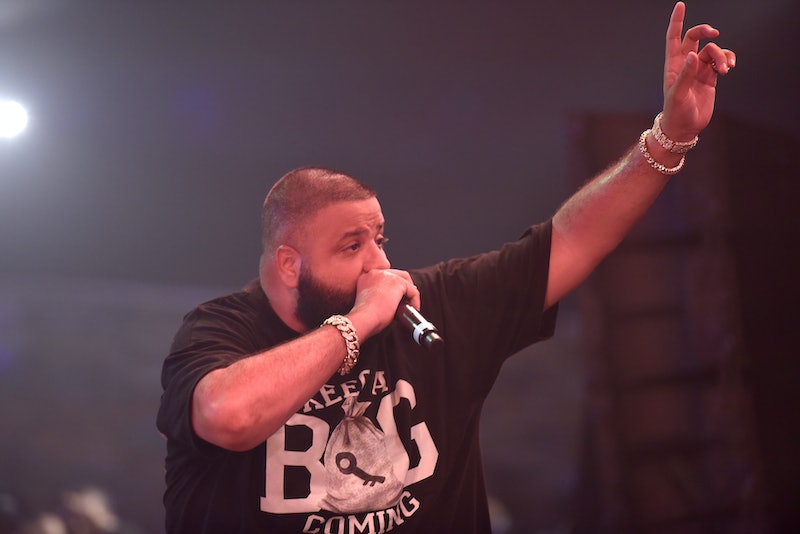 Emojis have gone from being cute winky faces to full-on icons that make capital 'S' statements. Beyonce fans use the lemon emoji to defend their Queen Bey, fans turned against Taylor Swift using the snake emoji... and DJ Khaled has taken ownership of the key emoji via his popular Snapchat account with his "major keys." But for those who are unsure about what "major key" means, here's your guide to the hottest catchphrase of the year and one that DJ Khaled used a lot while he hosted the 2016 VMA pre-show on Sunday night.

The 40-year-old musician has emerged as a must-follow Snapchat celeb with his "major keys to success" snaps that often use — you guessed it — the key emoji. And this has resulted in a major following for DJ Khaled, with more than 2 million fans loving all the life advice he dispenses, according to Time. Some of the "keys" are fun and funny ("Almond milk. Cinnamon Toast Crunch. Major key to success") to profound ("The [key emoji] is to weather the storm. It’s gonna rain some days. That’s how life is. It is what it is"). These days, DJ Khaled doesn't even need to say "major key" anymore — he just posts the key emoji and his fans get it.

His latest album is even titled Major Key, making the catchphrase 100 percent official. He even has two songs with the word key in it: "I Got The Key" and "Holy Key," so I think it's safe to say everyone can associate the word "key" with DJ Khaled for a long time.

Before his newfound Snapchat fame, DJ Khaled was known as a member of the Terror Squad, working with Fat Joe. He collaborated with the likes of T-Pain, Ludacris, Mary J. Blige, Chris Brown, Ne-Yo, and so many more on hit songs like "All I Do Is Win," and "Hold You Down."