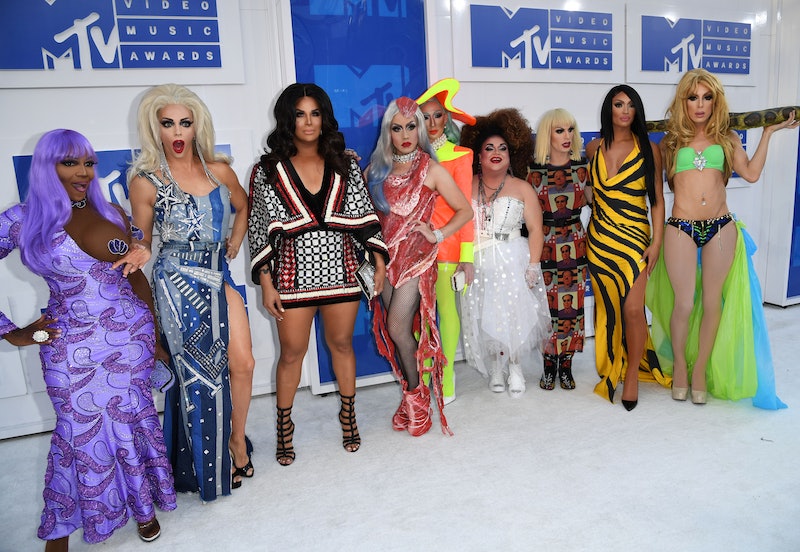 Britney Spears is one of the most iconic singers of all time and she's worn everything from living snakes to head-to-toe denim, so it only makes sense that people would recreate some of her iconic style moments. Channeling all stages of of the singer's career, the 2016 VMAs were filled with Britney Spears-inspired outfits.

Over time Spears has worn every single outfit that you could possibly imagine. She's rocked a red leather jumpsuit, nothing but jewels, and even a live snake during her performances. Basically, there's a lot to be inspired by, and the VMA is the perfect time to dress like one of the best out there. It's a compliment really. This year's award show was all about celebrating Spears too, so it makes sense that everyone came prepared.

From hairstyles to clothing and everything in between, Spears-esque style was seen everywhere on the red carpet. Even the outfit that the singer wore to this year's event was similar to a few other peoples' looks. This is definitely not the first time that people have stepped out wearing something eerily similar to one of the singer's iconic looks and it definitely won't be the last.

The whole cast went as iconic divas. I spy Spears on the far right.

Major Spears vibes. Just look at this similar jumpsuit that she wore herself.

This one was my personal favorite. Winkle looked pretty darn good dressed as the pop star.

If this doesn't scream Spears in early '00s, then I don't know what does.

Because, let's be honest, we all know that Spears made wet hair cool.

Does "Oops I Did It Again" ring a bell?

The girls showed up with the same exact sort of vibes that Spears wore as well.