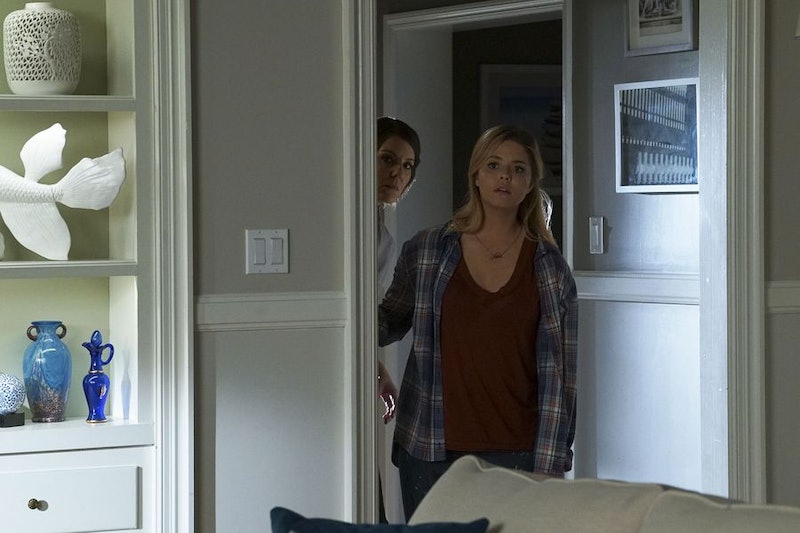 Things are looking bad for everyone on Pretty Little Liars, but there's one person who, to me, seems to be in the most danger. It's very possible that Alison will die in the Pretty Little Liars Season 7A finale, which promises a major character death right in the synopsis. The promo for the episode, "The DArkest Knight," shows that the Liars are facing a life or death situation, courtesy of Noel, Jenna, and a gun. The most frightening moment of the preview comes when a gunshot rings out, quickly followed by Spencer screaming, "What did you do?" while we see a flash of a high-heeled boot and skinny-jean-wearing body on the floor — and they could certainly belong to Alison.

Alison was already almost killed this season when a masked intruder dressed as a cop broke into her house, so clearly, someone wants her dead. If you think back to the flash-forward from the end of Pretty Little Liars Season 6A — you know, the one where the Liars come running into Ali's classroom (where she's inexplicably just written "Mrs. Rollins" on the chalkboard in perfect cursive), and warn her that "he's coming," it definitely seemed like Alison was the target.

The stakes are also higher than ever. Normally, it would be tough to imagine a show killing off a main cast member with 10 whole episodes left, but with PLL's love of flashbacks (specifically, its long history of Ali flashbacks), it wouldn't be out of the question. Besides, with history repeating itself in Rosewood with increasingly dire consequences, it would almost make a certain narrative sense for Ali to die for a second time, bleak as that may sound.

Then, there's also the fact that Ali might not be as innocent as she seems. With all the terrible stuff that's happened to her over the course of Season 7A, it's all too easy to forget the fact that just a few weeks ago, the Liars were convinced that she was Charlotte's killer. They've since moved on to other suspects, but let's not forget Ali's capacity for criminal mastermindery — it might just come back to haunt us. Likewise, if she's more involved in all of the Rosewood craziness that's going down than we thought she was, it might just come back to haunt her.

Still, even though it's certainly possible that Ali could die in the summer finale, it's looking increasingly likely that she'll be getting quite the emotionally fraught plotline for Season 7B instead. Remember how she threw up after her class cruelly pranked her by dressing up in black hoodies? Well, that might just have been more than mere surprise — because it might be our first clue that Alison DiLaurentis could be pregnant. If this theory is correct, it would mark the first time the show dealt with a pregnancy, and it could finally give us some answers on whether or not Alison had a secret baby way back when.

Whether she's attacked, receives life-changing news, or something else entirely, I think it's safe to assume that something major is going down with Ali in the PLL Season 7A finale.