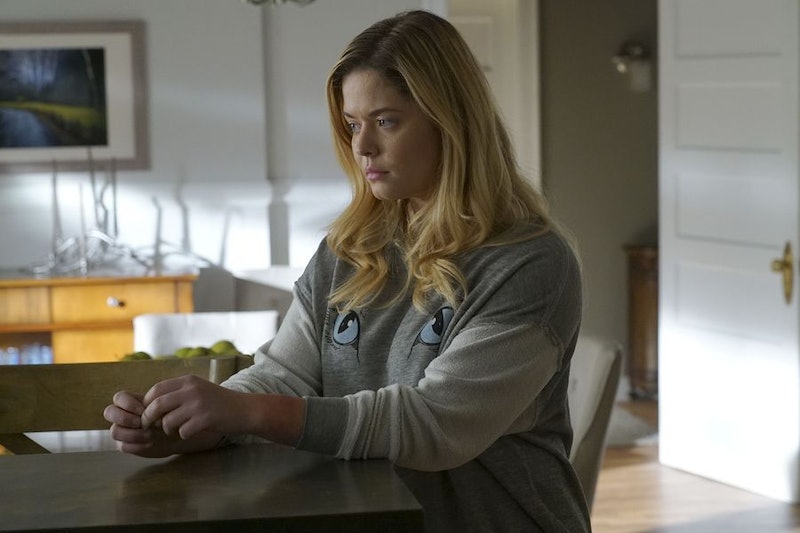 As Mary Drake told Hanna, every family has secrets and sometimes those secrets are people. This is certainly true in the DiLaurentis clan and an intriguing new Pretty Little Liars theory about Ali could explain her character's connection to Wilden and why the Amish farm from "The Talented Mr. Rollins" may be key to the show's biggest mysteries. When Aria and Hanna visited the farm, they met a little blonde girl named Eliza who looked to be anywhere between seven and 10 years old. Their conversation with her lead many of us to believe that Charlotte never really left the A game, but another theory on Reddit suggests that Eliza is Ali's daughter on Pretty Little Liars.

When Season 6A wrapped up, it seemed like a bunch of our questions were going to go unanswered — and one of them was "who the heck is Beach Hottie?" (Not to be confused with "Board Shorts," who is Ezra.) As a refresher, Ali told Charlotte (who we then knew as CeCe Drake) that she had a pregnancy scare before her disappearance and she was fearful that the father, Beach Hottie, would hurt her if he found out. Reddit user maryssmith suggests that Ali actually had the baby and her fear of the father (who was heavily implied to be Wilden) is part of why she went on the run.

The first clue is the girl's name — Ali has expressed a passion for Audrey Hepburn movies in the past and Ezra referred to her as his "Holly Golightly" (Hepburn's character in Breakfast at Tiffany's). The show has also linked Ali to Hepburn by titling Season 5's penultimate episode "I'm A Good Girl, I Am," which is a clear reference to My Fair Lady. In that episode, Ali was found guilty of Mona's murder despite her repeated declarations of innocence. And, of course, the protagonist of My Fair Lady is Hepburn's character, Eliza Doolittle. In short, we probably haven't seen the last of little Eliza and her name may be significant.

And, because Wilden was a top "Beach Hottie" suspect, it could explain why Mary Drake and Rollins chose to use a mask of him in the Season 6B finale. Although Charlotte was identified as Wilden's murderer, she may have killed him to protect Ali. When Ali saw Rollins in the Wilden mask, she stated that "it wasn't my fault," indicating that she's more involved in his death than we thought but she didn't actually kill him. Plus, Wilden was Amish in the books and I. Marlene King frequently borrows themes and incorporates them into the show.

We still don't have all the details of exactly how Ali spent her time while she was missing, so those gaps allow for the possibility that she gave birth to Eliza shortly after leaving Rosewood — the timeline matches the girl's apparent age range. Ali certainly wouldn't have been able to take care of a child while she herself was in hiding, so giving the baby to a family in the Amish community may have been her best option.

Although Eliza told Aria and Hanna that she met Charlotte, Reddit user wthmeshell suggests that Ali impersonated her cousin in order to keep her parentage a secret. (Which would mimic the popular fan theory that Mary impersonated Jessica in order to visit Charlotte at Radley.) Eliza said that the Ali doll is her favorite because she looks like Charlotte — perhaps because Ali is the person she really met. We'll have to wait for our answers, but I wouldn't be surprised if Eliza turns out to be yet another secret member of the DiLaurentis family.