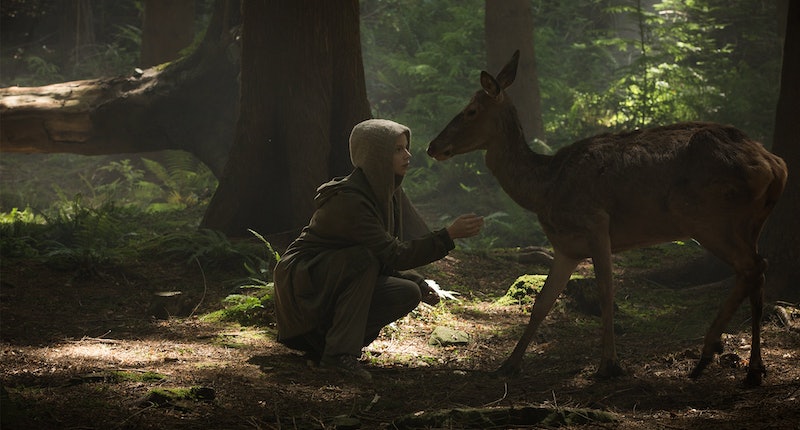 Going back to the ancient Greeks, hubris is a popular choice with writers looking to confront humanity with its own tragic mistakes. And many movies have explored the concept of "playing God" and its consequences. In the new science fiction thriller Morgan , the titular character is the not-quite-human result of human tinkering. The corporately-funded scientists who engineered Morgan (Anya Taylor-Joy) are still in the process of patting themselves on the back for creating life when the subject of their experimentation lashes out at one of her caretakers. Kate Mara plays Lee Weathers, an unflappable suit dispatched to the project's remote home to give her verdict on whether or not the asset should be destroyed. It's cold logic versus parental preservation in the film directed by Ridley Scott's son Luke Scott. The thriller takes a question about the boundaries that should perhaps be placed on science to an extreme place; but is Morgan based on a true story?

Unless the government is keeping a massive genetic engineering project under wraps (and feel free to have fun with that, conspiracy theorists), Morgan, out Sept. 2, is a completely fictional tale. Deadline reported that the script by Seth Owen tied for 8th on the 2014 Black List, a.k.a. a voted upon ranking of the best unproduced scripts in Hollywood. The casting of Mara and The Witch breakout Taylor-Joy was announced by The Hollywood Reporter in early 2015. The piece also clarified that Seth Owens and Luke Scott were involved as the project was developed by Ridley Scott's production company Scott Free; Morgan was then shopped to studios with 20th Century Fox picking up the ball.

It appears that there is no overgrown country-home-turned-state-of-the-art-lab really nestled in the countryside of Northern Ireland where the film was shot and no hyper intelligent proto-human growing and learning at a frankly alarming clip. However, the idea that life can be formed and directed in a laboratory setting isn't a Hollywood fantasy. Human genetic engineering is a reality, though not as advanced as it is in the Morgan universe.

In March of this year, The Telegraph reported that a US-based biotech company called Editas Medicine was attempting to use genetic modification to help patients suffering from "leber congenital amaurosis," a congenital disorder that eventually causes blindness. The company plans to use a modification technique called Crispr (seriously). That stands for "Clustered, Regularly Interspaced, Short Palindromic Repeat" and naturally occurs in bacteria as a defense mechanism that cuts out threatening pieces of genetic code. According to The Telegraph, using that method on human genes is currently prohibited in the US and "is controversial because it fundamentally changes a person’s genetic code which can then be passed down to offspring." Not a quick fix then, but a full genetic overhaul.

CNN reported this February that British scientists were given the official go-ahead to genetically alter actual embryos in the name of research. There are strict laws against implanting those embryos, but critics of this avenue of research often site the possible escalation as their reason. The undesirable endpoint? "Designer babies," or babies whose physical characteristics and every personality can be decided before birth.

Dartmouth College professor and Babies by Design: The Ethics of Genetic Choice author Ronald Green told CNN, "By the end of this century, I am absolutely confident that we will have the tools for someone with the means to use this information to change the child they can have through this process."

Morgan is a work of imagination, but it's immediately relevant to current discussions about the power and proper use of genetic engineering.