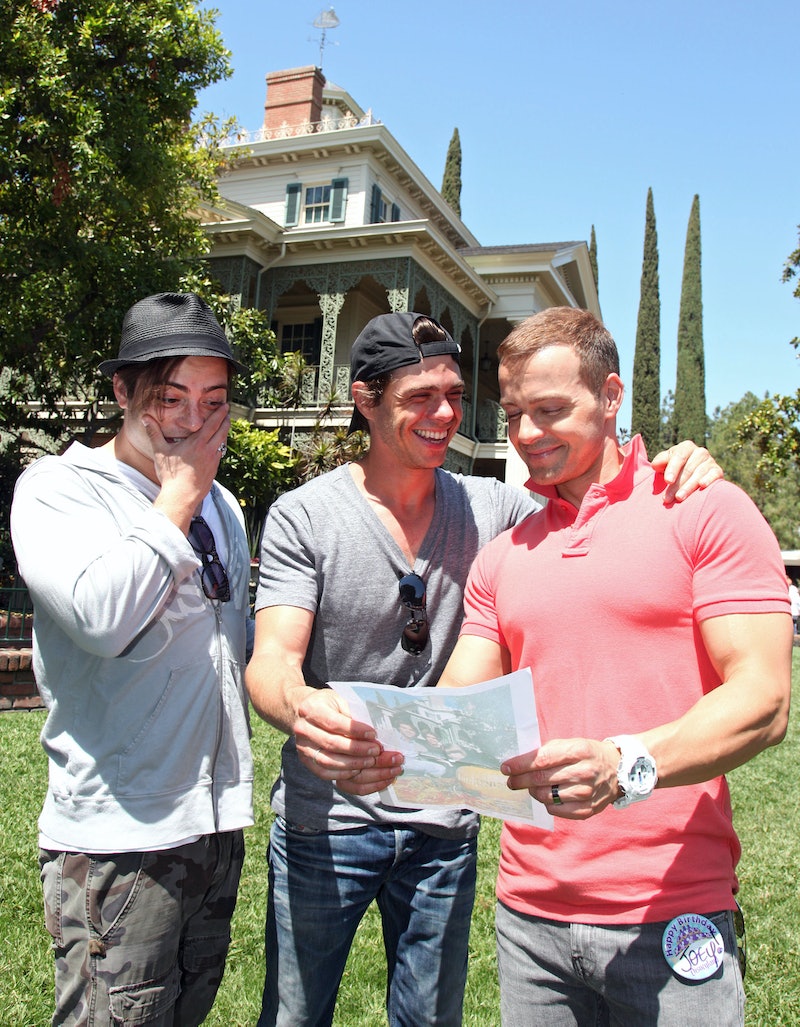 If you maybe skew a bit older as a '90s kid — that is, you're a '90s kid that could feasibly have a kid or two of your own — there was one cluster of brothers that dominated the pages of Tiger Beat. And no, not Hanson, losers. I'm talking about Matthew, Joey, and Andy Lawrence. While they seemed largely prevalent in that glorious era, you really have to do some digging to find out where the Lawrence brothers are in 2016 (Joey aside). Hell, you have to do some significant digging to find any TV shows and movies that starred the Lawrence Brothers.

Why? Real Talk: the babely three worked best in the core of the ‘90s, and they especially worked best when they were literally playing siblings (and that trend goes beyond their Brotherly Love days). Since then, they’ve popped up in obscure places, from defunct Freeform shows to your favorite kiddie flicks to even a handful of cartoons. And the cool news is, I unearthed some of their plausibly accessible work, in case you want to relive those Tiger Beat days on the immediate.

Here are a variety of shows and movies that you can get your Lawrence brother fix.

This sitcom (which is drenched in '80s schmaltz, just watch that intro) featured not one but two of the Lawrence brothers. Joey slid into the show Season 3 as the foster son of Nell and the Chief, while Matthew showed up as his little brother in Season 6 (I'm sure this really worked his acting chops). They're both basically babies with shiny pageboys here, so don't get too excited.

Who could forget Joey as Blossom's beautiful but dim-witted brother? Joey (the character) was a Fonzie-type for the early '90s, and, as Six definitely fell for hard for his now-feathery hair and iconic catchphrase, so did legions of teenage girls across America.

Oh man, if you can dig this Disney Channel gem out of the darkest corners of the Internet, send that bad boy over my way. Brotherly Love features the entire Lawrence trifecta as (wait for this plot twist) a trio of brothers, and it is subsequently a veritable Babe City (with Andy taking that literal as the token cute kid). Gone too soon. Gone. Too. Soon.

In the final chapter of Joey haircuts, we see him joining forces with another '90s icon, Melissa Joan Hart, for your classic ABC Family sitcom. The show called it quits last year, but, if you're into that kind of thing (slightly goofy teen icons who turn into slightly goofy hot dads), you can catch the full series on Hulu.

Maybe you were a little too distracted by Robin Williams in drag to notice Matthew as a pre-teen dream with a delightful shag cut. Or maybe that's all you noticed as a love-struck teen and the reason you still hold onto that VHS today.

In some ways, the 2002 flick is still pretty hilarious, and, in other ways its raunchy humor has aged pretty badly. What's clear is this: Matthew as Rachel McAdam's boyfriend Billy is one of the hotter parts of the turn-of-the-millennium comedy.

Matthew took up some of the latter years of Boy Meets World as Shawn's half-brother Jack, getting in with the gang during their years at Pennbrook. Which eventually led to him stopping by...

Thus far, he only has one guest spot, so, if you don't have all the time in the world to marathon watch the Disney Channel original series, you can skip straight to the Season 2 episode "Girl Meets Semi-Formal."

I'm not altogether sure if you would consider Jack Frost a timeless Andy Lawrence film (no, I am sure, you wouldn't), but, in case you're curious, you can catch him in spades as Henry Rollin's son Sid.

This is more of a fun fact than a way to catch a Lawrence in the flesh... unless you had designs on T.J. Detweiler as a kid. Yup, the littlest Lawrence brother voiced the Recess ringleader.

Finally, something easily accessible through Netflix. Andy held a recurring role in the mental illness-centric series, in which he served as a temporary love interest to youngest Gregson child Marshall.

We're talking about the new version, of course. Most recently, Andy has been making some small waves with a recurring role as Eric Russo.

So OK, it's not so simple to find the Lawrence brother in 2016 after all. But it is comforting to know that somewhere, somehow, on the corners of pay-for-stream services, you can check in on the Lawrences like it's 1993 all over again.

More like this
Jason Oppenheim Broke Down In Tears Over His Chrishell Breakup On The 'Selling Sunset' Reunion
By Bustle Editors
8 LGBTQ+ TV Shows & Movies Like 'Heartstopper' To Watch On Netflix
By Alyssa Lapid
What’s New On Netflix: A Victoria Justice Rom-Com & The Return Of David Letterman
By Arya Roshanian
What’s New On Netflix: The Return Of 'Bling Empire' & A Rebel Wilson Comedy
By Arya Roshanian
Get Even More From Bustle — Sign Up For The Newsletter