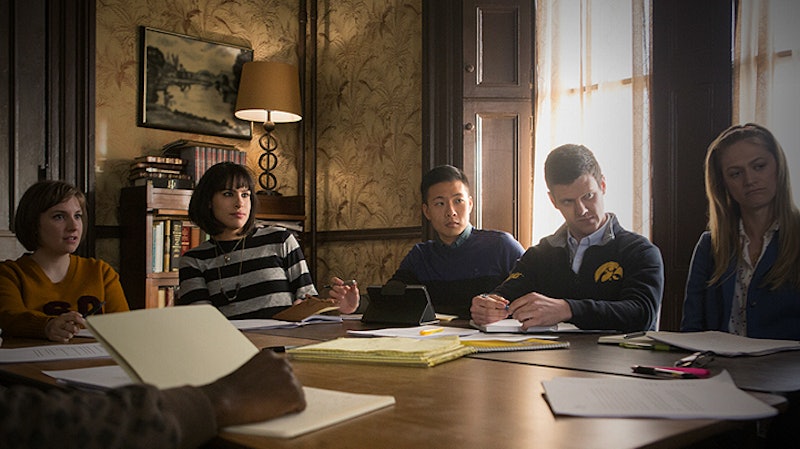 Writing workshops, like most forms of combat, can be both challenging and rewarding. If you were a creative writing major in college, you're probably a seasoned workshop veteran, with a stack of passive aggressive manuscript annotations to prove it. If not, then it's not too late to find a local writing group and meet all the delightful writers you've been missing out on.

Now, far be it from me to critique other writers. As far as I'm concerned there's always room at the top (plus, I've written far too much adverb-heavy garbage in the past to judge anyone). Having a community of other writers gives you a support system when you really need to vent about Jonathan Franzen. And writing workshops are genuinely helpful. Feedback is invaluable to any young writer. Plus, there's the bonus that constant criticism and backhanded compliments will thicken your skin until you are incapable of emotionally engaging your fellow humans. It's a win/win!

But I think we can all agree that there are certain types of writers who tend to crop up in every workshop. I'm not saying these writers are necessarily bad (many of the best pieces are written by the most annoying writers, after all). It's just an unavoidable fact of nature that any workshop will contain one or more of the following writers:

He uses simple language. He chuckles darkly to himself when anyone else reads their work out loud. He has slept with at least one girl in your workshop, and she doesn't seem to mind that most of his fiction is about how women are untrustworthy. When you go to the bar after class on Friday, he knows all the whisky brands. He'll be very eager to explain to you that chick lit is not legitimate literature, but he'll probably never learn your name.

She's a college sophomore, but she's working on a memoir. Everything she writes, fiction or non-fiction, is based on her real life escapades. In her Tumblr "about me" section, she describes herself as "quirky." She's working on a TV pilot based on her life. Don't ever try to compare her to Lena Dunham, though, because she thinks Lena Dunham is extremely problematic. She's the one who slept with the Hemingway bro.

You want to hate her, but you also want to be her (just a little bit). Or at least, follow her around and take notes. All of her characters are skinny girls who are railed on drugs (and the cool drugs too, not whatever drugs you're doing). She's definitely rolled up to class high. Her Twitter following is immense, and Tao Lin retweeted her once. She may or may not have a published chapbook of feminist poetry. If you try to critique her writing, she'll just give you a withering stare because you clearly didn't get that this story is supposed to be ironic.

A sub-species of the Hemingway bro. The Hemingway bro might show up in a suit jacket, but the DFW bro wears a beanie, weather notwithstanding. His favorite film is Fight Club or Boyhood. He and he alone understands postmodernism. He'll painstakingly explain to you why his writing is actually very pro-woman, and you're the sexist one. You secretly suspect that he and the Cool Girl are doing drugs together after class and having a way better time than you.

You really, really wish you could understand what this kid is talking about. But they have enough characters and locations to make George R.R. Martin's head spin. Most of the workshop is spent listening to them describe how magic works in their fictional universe, and the basic grammar of their invented-language, and why, historically, Younglings are not permitted in the Citadel. They will become frustrated if you do not immediately grasp their intricate, fictional, dragon-based economy.

Her Instagram identifies her as a "Writer. Thinker. Dreamer." but she doesn't seem to actually write very much. She's all about the writer aesthetic. She owns either a vintage typewriter or an extensive journal collection. She takes a lot of photos of her coffee, and frequently posts quotes about writing. She keeps bringing in the same poem about her ex. She has unironically described herself as an authentic person.

The intern believes in networking first and writing second. They have interned at every publishing house, literary journal, or zine worth knowing about. They run a well-known poet's social media. They have had lunch with your favorite author, and they have been published on at least one high-profile website. If you ask them what they've been reading, they will tell you who they've run into while working at a literary festival. May or may not have an uncle in publishing.

Don't try to understand them. You're not meant to understand them. They're bringing the shape-poem back in a big way, or they work in collage. Maybe they're turning their screenplay into a series of tweets. They will likely call their work an "exploration." They are anti "big publishing" in a very vague way. Their highest compliments for a piece are "raw" and "gut wrenching." Your feedback for their writing will only be met with pity.

They're not here to write. They're here to critique. They have a deep and urgent problem with anything anyone else writes. They will dominate all group discussions, but they rarely have anything constructive to say. They want you to know that your work is derivative, but they don't know what it's derivative of. When it's their turn to be critiqued, they will still monopolize the conversation by eloquently defending their own writing and ignoring everyone else's advice.

They joined this workshop because they've been "thinking about writing something" for a while now. But you've never seen any of their writing. They like to bemoan the craft of writing, and talk at length about their debilitating writer's block, and how they "could have written" that bestselling novel if they wanted to. They've started at least one sentence with the phrase "As a writer..."